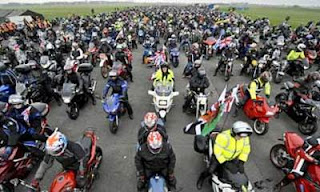 My only experience of motorcycles goes way back to the 60s when, because an evening class exam ran over time, I missed the last bus from Edinburgh to Peebles.  A pal suggested her boyfriend would be happy to give me a lift on his bike and, because I had no alternative, I donned the helmet and tentatively heaved myself upon the pillion seat.  No real padding on those days - even less than my bicycle perhaps - but needs must. We arrived at my home some 23 miles later and once I was prized from the back of my friend's boyfriend and had a long soak in a hot bath, I felt nearly human.  Alan deserved my eternal respect because he had to return the 23 miles in needle-sharp sleet and facing the biting wind.

Yesterday saw thousands of bikers, from all over the UK, take part in an event for  a little known but very worthy charity. This year's Ride of Respect saw 10,000 bikers attending the thank you to Wootton Bassett and those who lived too distant organised their own events; resulting in bikers riding in honour of soldiers serving in Afghanistan on the roads of Tyneside and Northumberland, Scotland, Leicestershire, Kent, Shropshire and Essex.

One of my loyal readers took part in the Wootton Bassett ride (having travelled from Pembrokeshire) and has written a diary post of his experience complete with some super photographs.

Of all the wheeled transport we have in Britain, motorcyclists appear to be the most generous to our less fortunate and I feel rather embarrassed that motorists don't make much, if any, effort.  We'll never usurp the bikers of course but could be their 4-wheeled support act. 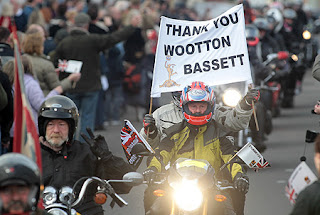 The bikers raised a minimum of £100,000 yesterday. They deserve our sincere thanks.
Tweet
Posted by subrosa at 13:06

Thanks Rosa.
Driving is just driving.
Motorcycling is a lifestyle.

I once got asked by a down and out homeless in London's Soho, "why is it always you bikers are generous?" I didn't know. Maybe we're out in the elements, and get flack from all and sundry like they do.

I used to get strange looks when I moved to the village I live in, back in the early eighties.
On my custom Honda GL 1000, long hair, beard and earring.

Then they found out I was working in their local library.

Thanks for the support, Rosie.

Without wanting to wax too philosophical, I suspect that part of the reason to the above question is that bikers are somewhat marginalised and seen slightly as outsiders - even normal middle-class blokes like me - and therefore naturally feel an affinity for anyone outside the mainstream. Also, there is, I think, a desire to disprove negative stereotypes by organising toy runs and so on.

I have always felt positive towards bikers since the family car got a puncture while on holiday when I was about six. Dad wasn't struggling to change the wheel, but nevertheless a hairy and outlaw-looking biker went out of his way to offer to help. I have been to many bike-related events since then, and I have found a sense of friendliness, community and brotherhood that seems to be lacking elsewhere. If you're ever in trouble, find a biker and ask for help. I doubt if you would be disappointed.

Your support is appreciated, Rosie.

Derek, you may well be right. Quite a few bikers use the scenic roads up here and they come far and wide. Europeans particularly enjoy the peace on our roads and the sense of belonging to another world.

Conan, and they still shake their heads in wonder I bet. There's something about a grandad with long hair, a beard and earring...

Richard, I was delighted to do something for you. One of the few pleasures of blogging. ;)

I must admit I've never met a biker who hasn't been well mannered and keen to show their bike. Not so long ago I had a one mile trip on an Austrian's bike. Some experience with the two walk talk, my own radio and a seat better padded than my settee.

In the area here there is the annual Vintage Bike Rally and I always pay a visit to look at the machines which only exist by tender loving care.

Being a lapsed motorcyclist I can agree with the sentiments here. There's not a snowballs chance in hell of the average car driver getting involved in something like this, but I'm surprised some of the owners clubs haven't considered it.

@ Rosie - I have distant memories of getting home from the pub (20 miles away) and having sheet ice break from my clothing as I dismounted... The rear view mirror stalks were twice the width in one direction, due to the ice build up!

OK, they're not the 'average' car drivers!

Derek: "Driving is just driving.
Motorcycling is a lifestyle."

Or, as my favourite quotation has it:

MDave: I once rode across the Pennines in early January (on a Honda C70, would you believe) and when I got to my destination, my beard was frozen solid. That was before I could afford luxuries like a full-face helmet.

Don't forget folks there is a huge community with the original classic mini who have raised £millions over the years with the likes of the Italian Job run etc.

Ah Billy, yes but they don't get much publicity do they? Perhaps they could up their profile now many youngster go for the modern mini.

I remember joining in with a massive WV charity run in Germany back in the early 70s Derek. My friend had a camper and there were thousands of the things there resulting in me getting lost. Great weekend though.

We bikers live close to death at all times out there Rosie, that I believe engenders a generosity of spirit and simultaneously a fierce determination to stand up for what is right (though ideas of what 'right' may be may vary), all in all though bikers realise that there is worth in fellowship and seek to extend that fellowship wherever it may seem to be wanted or needed.
(Honda 1100 Shadow)

Thanks for this SR and your link to Richards report; like most recent news this had passed me by.

Likewise a (recently) lapsed biker; I turned up at the parental home with a brand new Honda CBX, six cylinder in-line 1,000cc when a bike of that size was fairly rare. Mum was not too keen and it was only years later that I worked out it was probably because she was a nurse working at the time in the brain scan department of the Royal Free Hosptital in London.

Indy, the way some of them ride round the quiet roads up here, I'd agree they live close to death. It's just a few of course who get over-excited about peaceful roads, but they forget we have bends etc and there are always a few fatalities a year involving them.

Thanks for reading it banned.

Your Mum knew more than most of us mums about the dangers of motorbikes and she would also have known the dangers aren't all cause by the riders but the other road users.

I admit a biker has come up the side of my car without me seeing them in any mirror. They appear out of nowhere at times, but here most ride with full headlights all the time, so that helps a little.

Another Honda owner. The Germans like Honda too. Last one I saw was a very posh Honda owned by a German. It was more like a car without the roof and sides.

Isn't 'nowhere' always the place one does not look?
'Dressers' (the cars without rooves), seldom filter through traffic. So called for being 'dressed up' in all the accessories available, and about as wide as a kitchen dresser (complete with crockery).

Sports Bikes are the equivalent of the replica Football Jersey, and the rest are . . the rest.

Headlights on is a tricky issue. A new 'regulation' has been passed that requires all new vehicles to be fitted with Daytime Running Lights with much campaigning against it, as there is evidence to suggest daytime lights can cause dazzle and annoyance, and mis-understood signalling - especially when a firmly sprung motorcycle goes over 'speed humps'.

The 'Be Seen' campaign may sound common sense, but immediately puts all at risk who do not dress and illuminate like Christmas trees. The upshot is, people 'look' less, and expect the other party to take the onus in an 'event'.

There is also another factor; dazzle camouflage was used to good effect during wartime. With every high street and urban area bedecked with colours of varying hues and brightness, there are many times when a solid dark object actually stands out more than a multi coloured one. Even Police Officers on their bikes with reflective dayglo panels and lights on have been involved in accidents where the other party has declared: "Sorry Mate, I Didn't See You" SMIDSY.

Being seen, is only half as important as 'seeing'.

You're right about being seen and seeing. It's difficult for bikers and most do try to do their best up here.