Why Are Scots So Submissive? 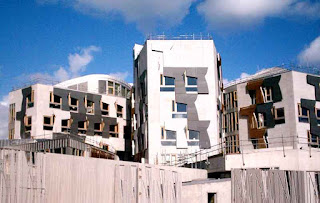 The Scottish Parliamentary elections are every four years - as stated in the Scotland Act - but to suit Westminster the 2015 election has been postponed until 2016.  London can't have these irritating Scots electing their own political representatives while they, as the Mother of All Parliaments, have decided they will have their own  ballot on that day.  That's due to the Libdems who insisted, as part of the coalition agreement, the next general election should be held on 7 May 2015.

I have no particular grievance with this one-off change but the Scottish Secretary's proposal that Holyrood elections should be permanent five year occasions concerns me.  The cynic in me ponders the benefits to unionist Westminster; there must be some or the idea would never have been mooted, although there is evidence from Germany that when Bundestag and state elections (which are conducted by Länder rules) are the same year, the state elections were completely overshadowed. Yet what are the benefits to Westminster?

Winners of all future Holyrood elections could be given a five-year term instead of just four, he said in an interview... (my emphasis)


He added: “The point that we have made is that when we established the four-year term of the original Scotland Act it was the result of a fair degree of public consultation and discussion.

Regularly I read about Westminster telling us how it will be; no public consultation, no debate, just instruction and we accept it.  Why do we acquiesce without even a murmur of discontent? Changing the timing of our country's election can't be seen as a priority and it could be damaging - not least to democracy.  The argument appears to be that 5-year Scottish elections would create more stability and give our government longer to legislate for change.

I dispute that.  If an elected Scottish government cannot push through legislation within four years, they've little chance of doing so with the addition of 365 days.

As for Mr Moore, he's forgotten his party's policy, not so long ago, was for 4-year fixed term parliaments. [11]  To assist him with his memory:

The Liberal Democrat policy in favour of four year fixed terms was set out in the policy papers Real Democracy for Britain(2007)[14] and For the People, By the People (2007)[15].


Who would have believed that was libdem policy only four years ago?  Me.


All these constitutional changes we're hearing about at present favour the libdems. No matter how badly they do in future voting, if the AV result is a yes, then they will be the king-makers.


Time we stood up to this style of dictatorship from London and did become the government who 'picked fights with Westminster'.  Much rather that than submitting to Westminster to keep the peace.  The only party who can do this is the SNP and I'd like to see them stand up to Mr Moore and suggest his idea isn't in the interests of the Scottish people (which it won't be in 2020 because the elections will once more coincide).


Time we woke up, stopped being submissive and noticed how much Westminster 'rules'.  If we're ever to be a country which makes our own decisions and has has total fiscal control we need to continually challenge Westminster decisions which are not in our interests.

"The Scottish Parliamentary election are every four years - as stated in the Scotland Act - but to suit Westminster the 2015 election has been postponed until 2016."

At least the Scots have their own parliament.

Since when were politicians 'given' their role, I thought it was meant to be worked for?
But then anyone who could countenance that hiddeous building and think it conferred any sense of authority or competence to its purpose clearly has absolutely no judgement, so the extra year probably won't matter.

To make matters worse Subrosa...wait for it...they lost at rugby today to er...England.

Indeed Joe but what's the point if Westminster tells us what to do?

Worked for Woodsy? It ought to be taken not given.

I have to agree with you about the building. A couple of years ago when I did a poll about its architecture it was roughly 50/50 for it. It's an eyesore to me.

JJ, aye I know. I watched every minute as rugby is my weakness. Mind you, the English didn't get their points easily. Was the best play from Scotland in the tournament so far.

Don't be so cocky. I bet many English said phew! :)

I mean that politicians are not 'given' anything, it is not a gift, which is something for nothing. Politicains are very free with the concept of being 'given' or 'granted' 'power', and thus forgetting that they are actually being trusted with a two-way arrangement where they have responsibilities and obligations.

Hi SR, If they are so fond of following Australia and want to introduce AV, why wont the piggies go the whole hog and have three (3) year elections as well.It might keep their eyes on the ball and their minds on the wishes of the electorate instead of their bank balances.(some hope).

There you have it in a nutshell.

Westminster is cocksure this parliament will last five years. the way their going they will be lucky to see this year out.

Independence is the answer, then it doesn't matter to Scotland when the Westminster sham elections are.

The next Westminster election will be held, not on May 7th 2015, but a month or so after the Lib/Con coalition collapses.

It's not very likely that it will last four more years, so your fears may well be moot.

Three year elections Apogee? I can hear the gasps of shock and horror from politicians far and wide.

Ah that's what I mean too Woodsy. Sorry crossed wires here. Exactly, given and granted are used to impress the hoi polloi to the effect that our masters are great and good to bestow such upon us.

Oh Crinkly, I do hope you're right.

I would like to think you're right WY but somehow I think they'll just manage to get there - regardless how many policies the tories have to drop in order to keep the libdems onside. Many of their EU proposals have already hit the bin.