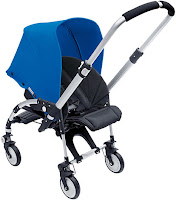 Today's parents seem to have their priorities a little twisted and this comment from a mother, about her six-month old's form of transport, made me feel quite sad.  The pushchair in question is a Bugaboo Bee (pictured above in blue) and cost both sets of grandparents an astonishing £560.

Beau is the name of their first child and his parent's preferred colour of Bugaboo Bee is red.  The pushchair is said to be favoured by celebrities.  The mum:

I used to be quite critical of people spending a lot on baby things, but when I found out I was pregnant I got a bit obsessed with all the latest gadgets on offer and was spending ages on the internet 'researching' it all.

"I kept noticing prams in the street and noticed how cool the parents looked, folk walking around with a coffee in one hand and pushing this trendy pram with the other. It was sort of like they still had their freedom and I wanted to be like that.


Why didn't one set of grandparents take their child aside and tell them they're daft?  I realise the pressure advertising and television puts upon those who have little understanding of the true values in life, but surely someone in the family could have found the courage to help these young parents on the right track.

Now it would appear the mum has realised (slightly) how foolish she was to spend that amount of money on a pushchair.

"I've calmed down a lot now and think we could have done things a lot cheaper, such as taking up the many offers of second-hand prams from friends.

"I thought I'd researched it all. I hadn't factored in the cost of on-going things, such as disposable nappies and baby wipes, which eat up a lot of cash. But I do love going out with the pram.

The sadness for me is she doesn't seem to realise that there's nothing glamorous about walking along the street pushing a pushchair with one hand and carrying a coffee with another.  That's not freedom, it's indoctrination with a little imitation thrown in for good measure.

So long as there are sufficient idiots out there, manufacturers will make, and retailers will sell, all manor of 'premium-priced' articles to satisfy over-inflated egos.

Sad thought but one is inclined to wonder whether the eugenicists might have a point. Balm for my slapped wrist please.

Well, as a grandad, the most important thing for me is how well does it protect the bab from the elements, how easy is it to push, how heavy is it and how quickly can it be folded to get on the bus. Everything else, colour, make, bells, whistles and other gegaws are also rans and infact sometimes get in the way. But I'm a grumpy old son of toil so don't expect me to be impressed by "must have" branding

30 and a bit yrs ago when I was a first timer and buggies were just putting in an appearance somebody commented "why would parents want to put their young at vehicle exhaust level?" As a result of that comment even my '97 arrival had a proper pram.
I used a sling followed by a back carrier for buses and country walks .

Now, if Dyson made a buggy that would be worth buying. :-) One with a ball for going round sharp corners.

With six of the wee beggars and a very picky Granny, we've spent a small fortune on buggies and car seats.
And don't mention the clothes, Jesus the clothes...

Such a shame so many have such little common sense Joe, of course it's no longer taught in schools.

I'm a bit in a jar here Tcheuchter if you'll pay the postage. :)

Exactly Dram and I can't believe it costs £560 to achieve these aims. Back in the 70s and 80s the 'poshest' cost around £35, was safe, light as a feather of getting on buses and in the car boot and comfy for the wee ones.

I had a sling too Elaine and it was superb. Pushchairs weren't favoured as mine preferred two feet, no matter how long it took.

Now there's a though Brian. However it would be costly though if it had a system which could deter exhaust fumes from two feet off the ground, it'd be a winner.

The clothes I can understand. I've cases full of unworn ones in the attic. Would hate to begin to price them. Bought them thinking I knew the size...

Disposable nappies!!!
Does the lady not own a twin tub?

Subrosa, you've just thought of another use for that Dyson cyclone technology. I wonder how long it will take for them to get in touch again?

Brian, I doubt it. Then again, maybe a wee word to the right person ...

I'm trying to think of the design. It would probably look like an alien's transport. :)

Just check on the price of SilverCross prams nowadays, you will be amazed. I do not think you will get much change from £800.

Now, surprisingly, I am a grandparent and my wife, a beautiful grandmother, and I bought a pram/buggy for our first grandchild.

I was pleased with all the safety features etc. BUT and it is a big but. Two years down the line and the pram/buggy has had to be sent back for new wheels and collapsing mechanism- in fact almost a new pram. Not down to misuse just poor design.

The tyres on the wheels are worn out and the cost of new tyres, for the size, is quite ridiculous.

This is one of the 'top' models and we bought a far far cheaper model from Argos, which has proved much better.

We just regret getting rid of our Silver Cross which was in great condition after our three children grew out of it. (They did object to being wheeled to college in it when they were 10. 12 and 13!!)

We have proved the old adage correct. There is no fool like an old fool!

Strapworld, I know SilverCross prams were expensive but £800 is a lot of money. My prams were bought second hand - both SilverCross - and with a little TLC both refurbished beautifully.

I handed mine onto another young mum for the same price they cost me, £1 and £20 respectively.

Like everything else these days it would seem quality is no longer paramount.

Aye, I think new grandparents go a little OTT. My turn has yet to come but I'm learning. :)

Oh strapworld, aren't you far too young to be a grandfather? ;)

The mums I glare at most are the very young ones pushing pram with one hand and texting with the other. The wean is invisible to them.

Jo, I watched a very young lass, who was talking on her mobile, push her pram right out into the road, between two parked cars and without any movement of her head. Once she arrived on my side I told her how really stupid she was. At least she had the grace to look embarrassed and said it wouldn't happen again.

I was a Silver Cross baby as was my big brother. On one (famous within the family) occasion he wanted to have a look at me en perambulator and so he reached up on tiptoe, holding onto the side. Alas he lost his balance as did the pram, but I suffered no harm when it landed on its side, thanks to the 2" of armour plate incorporated in the design.* The Silver Cross was handed on for a younger cousin. I hope its wheels ended up on a soapbox cart.

*I may have exaggerated the protective attributes a wee bit.

Brian, I don't think you were exaggerating. I suspect it was two inches of rolled homogeneous armour, the weight of which was offset by the finely tuned and balanced wheel set up.

I'm glad our daughter was more sensible. Most of the things for our grandson came from Charity Shops. There's some great bargains to be had. We have a high chair for when he stays with us, it cost us a fiver, all I had to do was find some new straps to keep him in. And we've got loads of toy cars and books, none of which cost more than a pound. When he gets fed up with anything, we give it back and get something else.
It's cheap, and keeps him happy.Some of these mothers look upon their baby as a fashion accessory and either have more money than sense, or haven't looked at costs that are likely to occur in a year or so's time, such as nursery or clothes which only last a few months because of the speed at which an infant grows.

Brian, didn't you know that's why they were called 'coach' prams? Capable of most baby transport crashes.

Would I accuse you of gilding the lily? ;)

Dram, these coach prams were heavy believe me. I couldn't push mine up the hill where we lived and had to get help. Embarrassing right enough so I never did it again.

Well done EP and when it's my turn I'll do exactly the same and have great fun into the bargain. He/she will have too because, like you, they will have things which aren't investments but essentials.

Well done the pair of you. Sensible grandparents.

Tell me EP, would you have contributed towards a £560 pushchair?

And high quality chrome at that Brian. I still remember the weight of their pram/carrycot chassis when trying to put it in the car boot. It was nearly as heavy as the carrycot itself which I'm convinced caused me lifetime back problems after lifting it in and out of the car daily.

Maybe it was the chassis though? :)