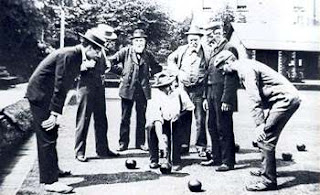 Old Scottish Bowlers from the 1880s
Seen here measuring the head  ie after all bowls have
been delivered measuring to determine which bowl is
nearest the jack.

Over the years I've attended various events at local bowling clubs but I've never quite managed to play the game because, much to the relief of those who know how to get anywhere near the wee while ball, the scheduled times for beginner groups has always coincided with my voluntary work.

Wrongly I assumed bowling clubs were privately owned until I learned the council still manages and maintains seven clubs in central Fife.  Council officials are now insisting that these clubs must pay for maintenance of their greens and pavilions (which are council owned buildings), electricity and water, insurance, machinery and equipment.

Colin Morrison, the president of one of the clubs affected said: "The parks and countryside department have been talking to us over the past three years but it came as a surprise to be told, 'Take over the club or close'.  He complained the membership was too old to push a mower/scarifier or aerator around a green and other sports were sponsored by the council; naming swimmers who are subsidised to the amount of £3.59 per visit.

The most heavily subsidised bowling club is in an MP's constituency. Each member of Galltown in Kirkcaldy is said to be subsidised to the tune of £540 annually.  Given that bowling greens are closed for six months of the year that's a hefty subsidy.  I wonder if they've called on Gordon Brown for assistance.

It would appear that the local authority is keen to offer assistance and according to the service manager for parks and countryside there are 'a lot of options', so why do I get the feeling that Mr Morrison is highlighting this now for purely political reasons, after admitting he'd been in talks about it for three years.

So when the Bowlers do take over & pay for the facilities they use, presumably ALL other ratepayers will receive a reduction in their rates?

[Or, will the council still spend the same amount of other-peoples-money, but on other things?]

The only time I tried bowling I was ordered off. It seemed that overarm bowling was not allowed. It is an interesting question, should a decent pastime that adds a touch of grace and colour to the local parks be subsidised as private clubs? I recall playing cricket on council pitches, a whole five division league depended on this.

I don't have an 'eye' for a ball I was told Demetrius. A polite way of saying my co-ordination is dreadful. Overarm? Tut tut that's cheating. :)

It is pleasant to go past the bowling club on a summer's day and perhaps watch a little of a game in progress. What would happen here if the club disbanded would be a developer buying the ground. In fact there would be a long queue as it's in a prime location.

Perhaps the answer is that all clubs receive a small subsidy and not have this variation where some manage to be self-sufficient and others totally reliant on taxpayers.

C'mon, lets have a bit of charity.

Most bowlers are OAPs and many of those will be on minimal pensions, why put a price on their pleasure through the incompetent idiocy of bankers, politicians and free loaders?

Many of these bowlers will have been struggling with 'austerity' long before the crash of 2008. And just because we're stupid enough to go along with the austerity scam surely we have no need to add to theirs?

I'd agree the majority of bowlers are pensioners Crinkly and that's mainly because the game is played during the day. My local club has a few youngsters but because of work they only play at weekends.

I still think funding some to the tune of £500+ a year and not funding others at all is unfair. A fixed subsidy should be given to all clubs.