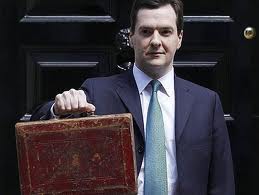 Today is Budget Day in the Westminster Parliament and many of George Osborne's decisions will affect us all.  What chance is there of a Budget Day surprise?

Much is already known about the contents of his announcement but a few guesses have caught my attention.

On the cards could be an alignment of income tax and NI contributions, thereby reducing the unnecessary compliance burden on small businesses and another, which would be very welcome, is reduced tax rates for income from patents. The current patent law does little for the small inventor, but a 10% rate of tax on patent income could encourage the retention of patents in the UK.

There is rumour that more goods and services will be added to the 5% VAT rate and the VAT 'loophole', namely the £18 Low Value Consignment Relief, closed.

It's been suggested car owners could be hit with higher road tax costs.  Although Westminster has leaked the news that George Osborne intends to scrap the planned increase in fuel, some say there may be a possible rise in Vehicle Excise Duty.

Nothing the Chancellor says today will reduce our general living costs though as he needs to find the money for their latest war from somewhere: it's far more likely the hoi polloi will be hit much harder than big business. As usual.

Increased tax on the oil industry and whisky - but the money will go to London.

They left whisky alone Aangirfan yet they hit our ultility bills with an increase on the oil industry. I can't think which is worse.