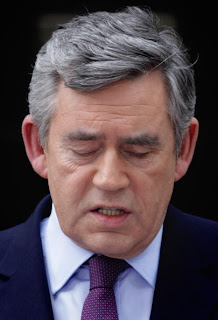 Today was the State Opening of Parliament which all elected MPs should attend. Yet there was one very obvious absentee.
Gordon Brown is the MP for Kirkcaldy and Cowdenbeath yet he was nowhere to be seen. I'm informed he's been out and about in Fife so why couldn't he not represent the people who elected him at this traditional ceremony?
Within many sectors of society there are events each employee must attend without excuse or question. Not for one minute could I visualise any member of the military ignoring a traditional occasion to which they had been 'invited'. It is their responsibility to attend or pay the consequences.
In his 'farewell' speech Gordon Brown said he did not enjoy the socialising side of being PM. Surely it occurred to him that being 'people' friendly' was a vital party of any public service job. Unless he produced a sick note for today then I consider his non-attendance most discourteous. Then again Mr Brown isn't known for his good manners or courtesy. It goes to show that they're something not even millionaire labour ex-prime ministers can buy.
During lunch, around 12.40pm, I switched on Sky News to find Angus Robertson being interviewed. In recent weeks I've been critical of SNP MPs and MSPs being negative in their speeches and interviews, but it was a pleasure to see Mr Robertson being positive about the contents of the Queen's Speech which affected Scotland. In fact he was very nearly complimentary! Well done Mr Robertson - more of the same please. Let Scotland be seen as having a courteous, dignified government and not the negative, spinning and profoundly ill-mannered attitude that pervades the labour party.
Tweet
Posted by subrosa at 13:43

Sigh , he probably thought it was just "some bigoted old woman".

Coming soon to bookshops near you, the smallest book in the world, Manners by G. Brown.

Oh Sandy, you've made my day and also achieved the difficult talk of putting a smile on my face. For that I thank you. :)

This coalition has put a smile on a lot of faces, including mine!We have a Government not a power for power's sake regime so beloved of Brown. Hateful in power despicable out of it!

Nice one Sandy, wish I had thought of that!!!LOL

"Gordon Brown is the MP for Kirkcaldy and Cowdenbeath yet he was nowhere to be seen". What was his press name again - MacCavity? he appears to have lived up to it again.......So the suckers of Fife (sorry loyal labour electorate) voted in increased numbers for him and he declines to turn up. Oh Great, taxation and no representation, that'll larn them (or not as the case usually is for labour loyalists).

He should have his pay docked. It was just embarrassment that the Cameron and Clegg were in HIS place and that Harman woman was leading the opposition.

He should remember he's not the prime minister now, he's a lowly back bencher and he has no excuse for absence from work.

Well, I was asked to attend a repatriation ceremony for a Dutch corporal a couple of days ago. It was made clear to us, just in case we were inclined to decline, that being 'asked' didn't mean it was voluntary.

Many years ago, it was also made clear to a very junior S-E that a royal invitation was only declinable on medical grounds - and those better be ones of death ...

I don't know about the changes OR but I can certainly support the dignified manner with which the new government conducts their business. A pleasure to listen to some politicians these days and especially the manners of the PM.

Perhaps other schools ought to reach the heights of courtesy which Eton teach rather than the reverse.

But that's the history of Gordon Brown as you say Tris.

You spell it out far better than me SE. In most professions ignoring known events can be a sacking offence, yet let's wait and see how many of the MSM mention it in tomorrow's papers.

Well, as he is after all,now just a lowly backbencher, just how much interest does he really have in westmidden politics,he is probably no longer interested. And would London labour really want him back there?

As he has intimated, his interest is in "helping" the labour party up here, he even volunteered to help, so any labour MSP in a safe seat had better watch his back !

Maybe he missed the train?

Isn't it part of his job to be there Apogee? I thought that was part of the deal that he represented his constituents at Westminster.

Well there is that Mrs. R. He no longer has the private plane although I hear he has security around his home.

I wonder how much that's costing the public purse.

Hi SR .It may be part of his job but when did that ever worry him if he didn't want to do something.