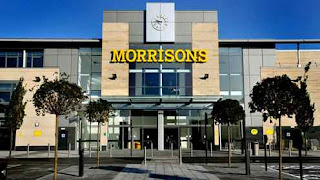 Arbroath, on the east coast of Scotland, has a population of around 22,000. It is also the home of 212 (Highland) Battery, Royal Artillery (Volunteers), the local Territorial Army unit.
The past couple of weekends hundreds of comfort boxes have been assembled at the TA's premises. The boxes are the result of an appeal, dubbed Operation Camouflage, run by the town's Morrisons superstore.
The store recently placed a large cage on the shop floor where people who would like to help those serving abroad can donate items they have purchased. The general manager George McLaughlin, gave an open letter to customers explaining why the cage was there and asking them to pick an item from the shopping list provided, add it to their trolleys, then place it in the cage before they leave the store.
The people of Arbroath have run such a community scheme before when they ran Operation Baby Wipes for 45 Commando while they were on duty in Afghanistan.
The local councillor stated, "It's been an absolutely tremendous effort all round." I second that.
Source: Courier
Tweet
Posted by subrosa at 15:45

Well done to Morrisons and Arbroath.

Now, a plea to Morrisons. Can I have a wage rise please?

A suggestion Rab. Why don't you get something like this together in your own area - the article tells who you need, then maybe your manager will think you're definitely worth more.

You'll get yer photae in the paper too :)

Hmm, maybe worth a punt. I notice that the collection box for dogfood that goes to the shelters fills up very rapidly.

Not seen that in Tesco or Sainsbury yet?

The new Tesco here in Kilmarnock wouldn't even allow the petition to keep Johnnie Walker in Kilmarnock into their store. Only after a week of backlash did they relent. Morrisons, Asda and the Tesco at the top of the town had it from day one.

Well you've got the ammo now Rab. Print off the Courier article and show it to him.

They're likely to be controlled by their respective HQs OR. If they thought they would acquire more customers I'm sure they'd go for it though.

What a great idea. I hope it catches on.

PS: Have you seen Conan's latest? It's got a rather touching picture of yourself and Niko in it. I hardly recognised you at first.

Good for Morrisons but how do they get past the ban on non-relatives sending stuff to our boys ( and girls ) ?

Not yet Brownlie but I shall look immediately. I do hope it's flattering and taken from my better left side. That tends to hide the jowls better.

I've no idea banned. Perhaps, because they are a large organisation, they have ways and this is one of them.

I didn't realise there was a ban on people other than family sending parcels. How do they police it? Is there a space on the BFPO parcel declaration to say you're family or not? I'd be interested in more information about it.

Above deleted for clarification ^

It was on BBC Radio a while back dealing with a woman who had previously organised a small charity doing just that.
The Soldiers' Mum that I mentioned on another Blog post confirmed it; family ony, apparently "we" would clog up BFPO with parcels addressed to " A British Serviceperson ".
I have no idea how they police it.

Well done to Morrisons and the people of Arbroath. Great effort.