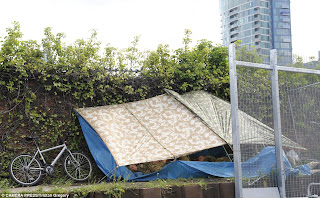 Soldiers rest under camouflage covers and tarpaulin
as they guard the tow path of the Rover Lea near
the Olympic stadium and Olympic site in Stratford.
'Winning' the Olympic Games will be recorded as a great national disaster in history.

Why?  We have reduced the country to a state of paranoia and the terrorists have already won.

The media continue to do their best to show enthusiasm for the event but they're paid to do so.  Here, in the far north, there is less excitement and even less interest.

David Starkey, for all his faults, expressed the feelings of many:

I am fed up of this national act of everybody get together, jump up and down and pretend they’re at a school camp for the Olympics. I hate forced celebration, I hate turning my capital city into a theme park. I hate Zil limousine lanes. I hate the Olympic emblem which has become a kind of plague curse on the entire city, distorting it, perverting it ...


Yesterday we heard that the military, who have been drafted in at exceptionally short notice, will not be paid any bonus.  Other public service workers will be paid extra for working at the games, but not the Army.  The Home Office has stated that any military personnel who have had to cancel paid for holidays will have any cancellation costs refunded.  Ask anyone belonging to the military about claiming the cost of a rail or air fare and you will be told "It's not worth the hassle". The Home Office will know from MoD sources that few will attempt to recoup loses.

Many soldiers, just back from spending 6 or more months in Afghanistan have arranged a holiday with their families.

The police are now saying they're in charge and more have been brought into London.  All will be paid overtime and will not be living in this type of accommodation. However, the Army will get on with the job without complaint.  It's the only public service we can completely rely on when our safety could be at risk.

So spend a minute or two in gratitude and also remember, many of those latest military Olympic security recruits were issued with their P45 recently, yet they won't find work once they leave the services - although most have been highly trained in skills needed in the country.  Is it any wonder our country is rapidly falling into social and economic decline?

Photo courtesy of the Daily Mail.
Tweet
Posted by subrosa at 09:06

For so very many reasons these London Olympics of 2012 have already gained the spurious and eternal distinction of being a disappointing, disastrous, debacle.

But, looking on the plus side - for the very first time, I actually concur with a comment from David Starkey.

Ideally, at this time, I would be out gathering sufficient nuts and berries before heading off to hibernate in some comfortable cave till all this Olympic hype and nonsense was far behind us.
Sadly, the truth is otherwise, there will be no easy escape for me.
Every waking moment, every newspaper, every TV channel, every radio broadcast, every blog, every tweet, even every conversation in the pub will be filled with these damned Olympics.
I worry for my sanity.

I'm dreading it, fresh from what was only a partial recovery from the disgustingly sycophantic jubilee arse-kissing-fest and now the Olympics.

A celebration of Britain? I think not and now I find myself in the very dubious position of being aligned with David Starkey, possibly the final straw but as JRB said, it's not going to end there.

I'm not easily disposed toward Armed Forces loyalty by default, but they are being shafted and that is also pretty disgusting.

And over it all you have Theresa May lying through her teeth.

What a mess, what a complete mess. I was keen for it to work as well, I have little to no time for petty ill-wishes and I still hope it does, but all this security, its just not right.

If that is the price we have to pay for a chair at the international top table, then its definitely not worth the it. If the Westminster Government thought this year would cement the British State together and underpin pin UK sentiment in the minds of ordinary people, I think they've got it completely wrong, more wrong than I ever thought.

The final insult to the service-people who'll be drafted in after being told to get lost?

What a massive cock up and its not even began yet.

You should see the Amazon reviews of the Official Olympic Cuddly Mascot.

Barbarian of the North said...

How to turn a celebration of human achievement into a greed and privilege trough fest. Obscene is the only word for it. More so because of the bill it will also leave behind.

I spoke to 4 squaddies recruiting today.
I said your being lined up for death in Afghanistan.

They were very polite but know I spoke the truth.

"It's Tommy this and Tommy that and Tommy go away,
But it's Thank you Mr. Atkins when the band begins to play"

I'm looking forward to the "Cover your @rse" competition; followed by the "Pass-the-Buck" event, both scheduled for mid September (or earlier)

I promise you JRB, that when this horrendous jamboree starts I will not post about it. Unless Andy Murray wins a medal of course.

I heard on radio that the athletes' accommodation is the most luxurious seasoned olympic attenders have ever experienced.

What good is that for poor Londoners though pa_broon.

Jings WoaR, that's really worrying. Hope others linked to it.

Shameful isn't it Barbarian and now the politicians and media don't want to hear of any more 'negativity'. They want reports to be positive and after the event they intend to discuss the security and other cock-ups.

It never crosses their tiny minds that it could be far too late by then.

I was reading a blog the other day and someone was offering his tickets to an event because he couldn't attend. It wasn't one of the major events (a running one I think) and he said 'I just want the face value and that is £91 a ticket'. £91???

In my experience they always do their best to be polite HC.

Army personnel aren't objecting to doing their duty but it's the unfair way in which they are treated that irks.

The police wouldn't stand for it but then they have their trade union...

It does create a sense of despair OR.

Aye Joe, the investigation has been carefully shunted to just long enough for folk to say "I can't remember" etc.

The whole lot of them including May and Coe, should be up in front of the public the day after the pantomime finishes.