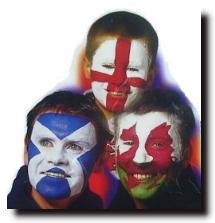 A guest post from Brian.
"Halifax Bank of Scotland (HBOS) is a subsidiary of the Lloyds Banking Group. Halifax is a subsidiary of Bank of Scotland. Imagine my annoyance when I, as a loyal Bank of Scotland customer of over twenty years (yes there was once a Coventry branch, opened to serve the many Scots who moved here to work in the colliery and car factories, now closed as well), discovered that the Bank of Scotland Fixed Cash ISA 2 Years pays only 3.4% interest whereas the Halifax ISA Saver Fixed 2 Years pays 3.7% interest.
The embarrassed telephone advisor explained that the two brands, ie Halifax and Bank of Scotland offered different rates. So they were competing with each other and offering a poorer service to  their Bank of Scotland customers whose brand loyalty they ignore. Meanwhile, the LloydsTSB 2 Year Fixed Cash ISA offers  rates of 3.7% for amounts over £10,000 or 3.4% for lesser amounts.
So an Englishman, a Welshman and a Scotsman go into a bank and ... only it's most definitely not a joke for the proud Scotsman and woman!
Tweet
Posted by subrosa at 09:18

" Halifax is a subsidiary of Bank of Scotland"
Halifax took over Bank of Scotland Brian. And died a few years later after operating successfully for 300 years.
I don't see your problem wrt ISA's. Lloyds Banking Group own all three companies and there's no 'Bank of Scotland' anymore so just pick Lloyd's best deal.
Personally I wouldn't bother with an ISA. Inflation will mean your money will be worth less after two years plus you can't get the money quickly if the economy suddenly collapses. Which is on the cards.
Silver and gold is a safer bet. Physical stuff though. Most of the paper gold doesn't exist.
Or get a wee plot of land.

@RMcG: With respect, Halifax is a subsidiary of Bank of Scotland.
The Bank of Scotland is the last existing commercial enterprise established by Act of the last independent Scottish Parliament (1695). Isn't that, albeit romantic link, a good reason for independence-minded Scots patriots, as well as canny Sassenachs to put their money where their mouth is?
As for the inherent value of certain metals, that depends on finding a willing purchaser who agrees with your valuation of the metal: "A sovereign for a bowl of porridge?" "How hungry are you?"
As for land, that is no use without water and fences to prevent trespass.
The most valuable commodity is trust. Which leads us back to paper money.

Brian. From your link..

"HBOS plc is a banking and insurance holding company and was created on 10 September 2001 from the merger of the Governor and Company of the Bank of Scotland and Halifax plc. These two banks are the main UK subsidiaries of HBOS"

But reading the rest of the article it looks like the 2006 Act of Parliament was all dodgy semantics to allow HBOS to keep printing banknotes.

I'm not sure why you trust fiat currency over metals. Our currency has devalued by 30% over the last 4 years while gold, for example, has risen by 100%.
Gold isn't worth more it's value is purely a reflection on the collapse of the dollar.
$250 dollars an ounce in 1992 to $1800 today.
Your ISA will lose you approx 6% over two years going by official figures but probably double that going by real figures.
Our debt has now entered exponential rise territory where it can never be paid off and we will print money to cover the interest on our existing debt.
This can only accelerate the demise of our currency.

Trust only applies to values.

Money is only a concept which by sleight of wit has been given the construct of smoke then mirrored as a substance of reality.

As such it feeds but fails to nourish.

Brian..
"What the economy needs is confidence, trust and a calm head."

It's everyone for themselves now Brian so I respect what you do with your own money.
The govt's are calmly transferring all the debts from the banks to the taxpayers ;)

I think R McG has it the nail on the head when he rightly says there is now a total lack of confidence.

The banks have lost confidence in their customers, the city, the economy and in each other. Hence the appallingly low interest rates on any form of savings be it short or long term. You might as well stuff any savings in a sock under the mattress as deposit it on account.

As for investing any spare capital, that too is fraught with difficulties, and investors have lost confidence in the longer term stability of the markets, hence the short term profit taking. Investment companies always manage to charge their admin fees to optimise their income but only pay any dividends or interest when the market is at its lowest.

Two years, or any fixed term arrangement is fine as long as your circumstances don’t change or the entire economy doesn’t collapse, and that sadly has to be a consideration. (Keep an eye on today’s news – confidence is failing – Europe could be about to enter another major financial crises – which will effect us.)

As for land, great if you want to walk the dog, but it doesn’t pay the bills in Tesco; and sad to say there is no law of trespass in Scotland (only Aggravated Trespass), everyone in Scotland has the right to roam.

Crinkly, RMcG and JRB, So let's bypass the banks and dip a toe in Peer2Peer lending and borrowing (I've done well with a small punt in zopa, for example). But if we all believe something bad is going to happen it usually does. Why don't we as a society stand up and lean in on each other and believe that good can come as a result - otherwise nothing would ever have been done?
Why does the baker get up early and make all those loaves to sell when for all he knows they might all be unsold? He takes a managed risk to open the sacks of flour in his larder.
But back to my post, why should Bank of Scotland offer a lower ISA interest rate?

Brian..
Sadly the rules of the game have changed for good and we no longer operate a Capitalist system. If we did there would be no RBS, HBOS, MFGlobal etc. They would be bust. But instead we're bailing them out and they're carrying on as usual.
Bank of Scotland offer a different ISA rate because they can. You don't have to buy it. Maybe they're using the loyal customer angle. That's a very popular scenario. Get the higher rate ISA from the other company.
Don't forget that when the ISA matures you will get back less ( in real terms ) than you put in and will have less purchasing power with the cash. Assuming you get access to the money.

Brian -as RMG comments it's down to random marketing and BoS looking for higher earnings.

The choice is yours to make. But be aware the City regards financial instruments aimed at the small general investor as investment for mugs.

Me I'd rather invest in a credit union. At least then you would know your money was doing some good and under the new rules the CU would pay you some interest.

A pox on all their houses, Brian.I too live in Coventry but fortunately....when I was but a wean my grannie opened a savings account wae a teenie weenie bank. ....and I had the good sense to continue a life long partnership with that upright institution(even though I had to do beezness with another institution for practical reasons). That wee bank was the Airdrie Savings Bank and even some of the big fellas were knocking on their door, cap in hand not so long ago.

@wisnaeme, You and your grannie are very wise to save with the Airdrie Savings Bank. I hope Subrosa won't mind me linking to a local small bank serving its customers since 1835, now via the interweb as well. Here's to another 177 of independence for the ASB - but please keep small and perfectly formed. It reminds me of the Bailey Building and Loan Association in Bedford Falls.

I've no objection at all to you linking to the ASB Brian. I've a few pounds with them but if they had a branch nearer me I'm sure I would use them far more often.