Prior to publishing these videos, I attempted to see how often the BBC has given any airtime to Mr Corbyn.  My Google request for BBC+Piers Corbyn returned the following: 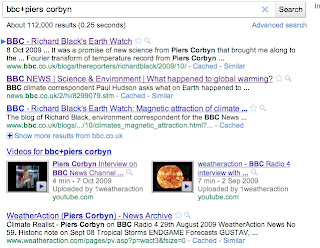 click to enlarge
Isn't it time the likes of Corbyn and Bastardi were included in our weather forecasting system?  But of course that would be detrimental to the bank accounts of those who make fortunes from the CO2 scam.  Remember, the BBC supports all of us paying higher hidden fuel taxes based on a false premise.  The evidence against global warming is waning but the profiteers and politicians go on with their propaganda.  The day will come when the Piers Corbyn's of this country are recognised as the honest scientists.

Thank goodness the Americans are pursuing the issue and with some enthusiasm as the following videos show.

SR, as one 'savvy' lady, do you honestly expect the BBC to promote the true facts?

If so, to coin a phrase, I had better take you in hand!

They'll have to face up to it shortly though WfW, all of the UK media. Corbyn is getting a vast amount of airtime outwith the UK and that will soon be impossible to ignore.

Don't you think so?

Of course the BBC and others will stick it out to the end but I feel the end is nigh.

Unfortunately, the Met Office is the BBC's 'contracted' weather-information supplier.

So the BBC, having agreed to pay the Met Office vast sums each year, will be loath to publicise anyone else's forecasts.

Yes I know the BBC have just renewed the Met Office's contract Joe but surely, if they're unbiased, they could include programmes with Corbyn. I'm not suggesting Corbyn takes over the forecasting for the BBC. After all, to break that contract would cost millions. I'm suggesting a level playing field.

I listened to most of Alex's broadcast that day. I thoroughly recommend hearing all of it.

Thanks Stewart. I missed this one but usually watch him.

"The evidence against global warming is waning".
Don't you mean "waxing"?

Am I not right in thinking that the BBC pension fund has investments in green technologies that would lose money if AGW were to be discredited?

They're hardly going to push the claims of people who, if correct, would reduce the value of their pensions now are they?

Maybe I should have written 'decreasing' rank. Waning means that in my dictionary which of course isn't at all perfect. :)

Yes I think you are Sobers.

But surely the BBC is unbiased. They say they are so they out to given a platform to all. Corbyn's last appearances were 2009 according to Google.

Tons of stuff has been removed from the internet SR. Especially if it doesn't fit in with the programme. So a search engine will never find it.
French nuclear power was causing draughts in the UK this winter.
How come ?
Hundreds of windmills were starting to freeze up over Christmas as there has been no wind. They had to be driven to stop the gearing getting damaged.
The UK had to import electricity from France and this is nuclear powered energy ( France is 90% nuclear). This imported energy turned the windills on calm days to stop them freezing up and gave us draughts.
Cheery ? ;)

Hi SR, afraid in this we are dealing with the 'big lie', it has to be kept going or a hell of a lot of 'big boys' will lose a lot of 'face' and their companies a lot of money.
The windmills are not inherently wrong, but the expectations the public were given was bordering on, to be blunt,a false prospectus. They would be effective in a properly designed system but not by themselves.
But the people pushing this and, to be polite, climate change, are not real scientists, they are politicians and businessmen with a veneer of science. They appear not to understand the concept of overlapping cycles of varying effects, some which will maximise and some which will minimise effects.
We appear to be going into a period of temperature minimum, thats a mini ice age if we are lucky, the real thing if we are not. Its a lot easier to get cool in a heat wave than keep warm at -40 degrees , like as at the north pole, forget the propaganda crap, think about it for a couple of minutes. Cant grow food, transport primitive, in fact what food, what transport. We would do what every people have done in history, move to a warmer climate, and you know what that means, you either fight for someone elses country, or you die. Or you reach an arrangement with some one which will not be to your advantage, you will become a slave.Look at the Huns (no ,not Glasgow rangers)
So a question, all our money the government is wasting on CO2 capture ,if it does what they claim it will make the planet colder, but there is no guarantee it will do anything but waste an incredible amount of money.
When the glaciers come marching over the hills, what ya gonna do then? Tell the political class to stop wasting money NOW, or you will see them in the jobcentre.
Scientists who study ice ages say that between our normal and a full ice age(-50 degrees) could be as little as 10 to 15 years,climate may oscillate up and down and the final drop is like falling off a cliff. Google it.

Have just watched those interview videos - amazing! As you say, almost total silence in this country. You (rightly) condemn the BBC for not investigating further, but is it not true that the other media act similarly?

My little theory is that the media are quite happy for the Met Office to bodge the forecasts because unexpected bad weather makes great copy. Also, the wrong forecasts make great copy in themselves. Couple that with Government omerta and fudge (a week is a long time in politics), and you have a perfect recipe for ongoing chaos.

Have you heard of the word 'flaming'? (I think that the 'flam' is pronounced as in 'tram'.) I came across it only today on a blog on the Daily Telegraph which was discussing global warming. It describes the practise of highlighting one small part of an argument and emphasising and criticising that one small part. The writer of the blog then has to justify that one small part. The 'flamer' then continues this argument ad inf until the debate collapses. Apparently, this practise of 'flaming' is a deliberate ploy.

This is the first time that I have come across this idea, although I have always had at the back of my mind that there was something wrong with many of the pro-smoking ban an pro-global warming advocates' comments. Now I see it. I now realise that ASH devotees are past masters of 'flaming'.

Note this peculiar idea that the Met Office are putting about that they knew about the cold spell and told the Cabinet Office, while still telling the people who pay their costs that the weather was going to be mild. Note how everyone is now discussing that idea. Note how the politicians are neither agreeing nor denying. Is that not a classic 'flam'? Come to think about it, have not politicians been 'flaming' for donkeys years?

It is worth bearing in mind when commenters on your site start picking out bits and pieces - don't fall for it. Make them stick to the main point. For example: I'm glad that they stopped people smoking in pubs because it stinks". Answer? "The ban is not about stinks, it is about 'harm' to workers"

That stops 'flamers' in their tracks.

Sorry to go on.

Surprising how it's the weather that gets some people to wake up! Typical of the British. The rest will follow in due course, after a few cups of tea. Forty years too late.

PS: Flaming, as in flame, is to attack with ad hominem attacks at every opportunity, intensely and to create annoyance. A 'flam' is basically a lie, so 'flamming' could be said to be lying. Words have so many meanings, and occassionally new generations will take a word and literally turn it on it's head: 'wicked' is just one example.

Sorry, you probably didn't want to know that! I digress.

Wake up you Brits!

Quite appropriate when used in conjunction with Global Warming postings.

However, I understand the term refers to any controversial statement made on a posting: light the blue touch paper, lob it in, retire immediately, and watch the fireworks!

Cheery RM? The consequences of stupidity are never usually cheery are they.

So that's why a farm not so far from here occasionally moves on very cold days. Interesting indeed.

Not far from here Apogee there's a small community who support a small windfarm - mainly for the payback they receive. They were promised money. I must see how much they've 'earned' in the years since they gave the go-ahead.

When a volcano decides to erupt is another natural event. Why was there no reference to the volcanic ash spilt into the atmosphere last year? The Met Office scientists brush that under their keyboards.

Aye it does look as if we're growing colder. Three winters in a row with temperatures increasingly lower.

Your theory is probably nearer the mark than mine junican.

No I haven't heard of flaming but I'll find out about the concept because it rings true.
Good example too. Thanks.

I did want to know that Derek! At this time of year the weather is always a talking point here. Maybe it's because it can be a deterrent to folk getting around normally.

" So that's why a farm not so far from here occasionally moves on very cold days."

Yes the windmills will need to be rotated during prolonged cold snaps with no wind. ( Typical Scottish winter when high pressure sits over the country). The alternative is a gear box change where the costs would be prohibitive. Especially for offshore turbines where the costs are estimated to treble.
The introduction of the 'smart meters' in every home would help solve the problem of intermittent wind power. Appliances like fridges could be switched off remotely from the control centre and compenstae for a drop in energy output.

RM, we certainly don't want to go down the road of smart meters and give away control of our domestic energy.

Thanks for the link. Very informative.

I was in two minds about how 'flaming' should be pronounced, having never heard the word spoken. The context in which I saw the word make me think that it must be 'flam' as in 'tram' because the idea of protesting vehemently about minor points put me in mind of the phrase 'flim flam'. I see both your points re ad hominem and the grenade!