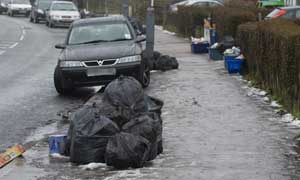 According to the media and fellow bloggers, refuse collection has become exactly that for some weeks - councils refuse to collect it.  The main excuse is the snow, but in some places like Birmingham, the refuse collectors are also working to rule and thus the problem is exacerbated.  Hundreds of councils have not collected rubbish and nearer home Edinburgh hasn't escaped either.

Most regular readers will know I stay in a rural area in Perthshire.  We've had more than our fair share of snow here - in fact another 2 inches have fallen overnight to accompany the 2 inches which fell on friday night - but since I've lived here never once has my rubbish not been collected on the date marked on the Collection Calendar we receive each year from the council. I've never heard anyone utter anything other than complimentary remarks about our binmen.  Yesterday I remarked to a friend we were lucky to have such a service. "Lucky?" she replied indignantly, "we're not lucky. We're provided with the quality of service we pay for".  Suitably reprimanded I realised she was right.  Council tax pays for the basic services of refuse collection, street lighting, road maintenance with a few other services like libraries, which we do need, thrown in and other services like event organisers, which we don't need. The water charges pay for clean water.  Not a lot to ask. Like all other councils mine is good at wasting money too but that's another story.

Reading about the plight of many I was forced to agree with Richard's analysis of why the people who serve us just don't give a damn anymore. (Perhaps I should qualify that by saying many of the people, giving my experience of my binmen).  It was my intention to expand on his article but I notice it's been done much more eloquently elsewhere.

If we want quality services we have to unite and rebel against poor standards.  We must stop accepting the old adage of 'funding' being the problem for everything.  Funding obviously isn't a problem in my council; certainly not in the refuse collection department - or environmental services I think they prefer it to be called these days.  Their service is excellent throughout the year. We only have ourselves to blame if council services are not of an acceptable standard.
Tweet
Posted by subrosa at 09:12

Here in Edinburgh the excuse given for non-collection of our rubbish for over 6 weeks was that the bin trucks could not get into the local streets - which incidentally Edinburgh Council didn't bother to plow to keep open at any time during the 6 weeks of the snow.

If Edinburgh had followed the example of Canada and some parts of the USA the Council bin trucks should have been very simply and economically fitted with snow plows thus enabling them to go about their collections without any difficulty, with the added benefit that in the process they would have kept the estate streets open to other vehicles.

However this simple and economic solution appears to be beyond the mental capabilities of Edinburgh Council.

Edinburgh seems to be the worst M. I do know local farmers have been helping these very expensive refuse lorries here by sticking a plough on a tractor and driving in front in the very rural areas.

Looking from the outside Edinburgh seems to be lacking common sense at times. I don't visit much these days. Too much hassle with the tramworks and parking. Also trying to park for the train at Perth can be difficult. I must be getting old. :(

"Looking from the outside Edinburgh seems to be lacking common sense at times. I don't visit much these days. Too much hassle with the tramworks and parking"

Good news - I don't visit Edinburgh very often either. Bad news - I live here and have to put up with all this parking / tram hastle. Livingston and Stirling were the main benificiaries of my consumer spending in 2010. Still I see the parking "revenues" are down and the council are greetin about it. Stand by for another tranche of the city being swallowed up in the parking permit racket. As for the bins, well we are now down to a collection every two weeks (should be weekly) weather permitting.

Like you, SR, I live in a rural area, and over the recent period of severe weather the efforts of the ‘environmental services’ aka the ‘bin men’ has been exceptional.

Im afraid I cannot agree with the blanket statement that those who serve us “just don't give a damn anymore” does not, and should not, apply to the vast majority of council employees, of whom many, very many, are conscientious, diligent hard working individuals, often working under extreme strictures, constraints and pressures.

Where I do see an ever growing problem, worthy of concern, is in the new breed of councillors.
No longer is being a councillor an outward manifestation of wishing to do good for ones community, it has become the first step of the political ladder; a place for the purely politically motivated to exert a degree of power; a place for the party activist to put the needs of the party before the needs of the community.

How has your councillor been voting in chamber recently, has it been in public interest, party interest or self interest? Have you checked?

It is all to ease to blame the council employee but overlook the politically motivated hand of the councillor that directs that employee.

I'm glad I don't live in Edinburgh Dram but I did once upon a time, in the days when you could even park in Rose Street.

The councillors seem to have lost the plot where the city is concerned. Nothing seems to focus their mind does it.

Weekly bin collection? It's been nearly two years since it was changed to fortnightly here.

Afternoon John. I see Richard's point though don't you? It's nigh on impossible to speak to someone who you feel understands. You mention restraints. Perhaps they're so overtrained they no longer 'interact' but read from a script. I feel like a nuisance when I phone the council - which is seldom. The difference between the attitudes in the tiny council office here and the library is chalk and cheese.

The new breed started when councillors decided they wanted a salary John. (I've just been speaking about this on another blog). Yes I have checked my councillor but how many of us do? How many people ever contact a councillor these days?

What I see is that councillors have little or no influence. Of course they don't like to think so, they prefer to think themselves pillars of the community, but they're not.

Some years ago I was involved with a local issue and thought I had the full support of my councillor. She was verbose in her praise of what we all were doing in our efforts to make a decent complaint. As spokesperson I attended a meeting with the chief planning officer, accompanied by my councillor. Throughout the meeting she nodded in agreement with the planning officer and said nothing about the validity of our complaint. Of course we lost. Since then, around here, nobody has time for any councillor.

Still every week and no problems we could even get away with 2-3 weekly collections as hens, wid birds and worms get food waste.

Damm meant to add this.

CH I don't have a problem with fortnightly collections as, like you, I can compost etc. I do feel sorry for those who live in the city and in particular flats.

Last year I visited an elderly woman who lives alone. Her flat stank. She was very into recycling and had bags and boxes everywhere - one for everything. Just as the greenies instruct.

She said it was easier to keep it in the house then go up and down to the bins.

It wasn't a healthy atmosphere at all, yet she couldn't smell it. Let me say the flat was spotlessly clean and only the kitchen and a spare bedroom (!) had been taken over by her efforts to look after the world.

Down in sassenach lands, south an west of London where we can't hold a candle to the amount of snow you volunteer, we're now onto the fourth week of domestic refuse non-collection - they raced around last week emptying what "green" waste wheely bins were out though - while they grey bins overflow all about.....

The worthless local rag has even been full of PR releases from the council urging us to "be good to the planet" and re-cycle our Xmas cards and no foil paper thank you! - no mention of the epic screwup that is "The Council"

Awww, SR. Thank you for your kind description of my humble post. Your friend was absolutely right, we pay handsomely for a service and are entitled to expect that we should get what we pay for.

It seems some public service employees and union officials spend an inordinate amount of time coming up with new reasons why employees can't or shouldn't do the job we pay them to do.

This is all part of the 'pay more, get less' meme that has become de rigeur. That Exeter councillor is a perfect example of this, telling residents to take the rubbish to the tip themselves. In the meantime what are the binmen doing?

When we do not get the service we pay for we should be refunded. That might focus the attention of these useless local authorities on getting the job done if they risk losing their spending power.

One of the problems with rubbish uplift in urban areas is that most people live in flats - and most of those flats have secure entries. So there needs to be some-one at home in the block during the day to give the bin men access to the back court to collect the bins. People sometimes overlook basic logistical problems like that.

Incidentally the fact that most people live in flats with communal bin areas is also the reason why a fortnightly bin collection is just not feasible in cities. We do need a weekly collection because if you live in a tenement with eight other households there just isn't the space to store all the rubbish for more than a week without it piling up to an unacceptable degree.

The smallest flake of snow was always an excuse when I lived south Gordon.

The only thing I can see working is if everyone withdrew their council tax until they get it sorted. Trouble is people won't do that. It's too easy for councils to get their money.

Yes that could be another way to raise standards AM, but I doubt if our councillors would be prepared to legislate for refunds. Then again, most I've come across in recent years are completely without influence. Their expertise lies in attending meetings where decisions may be made then binned.

There are a few areas like that here too K but the security system is organised so as access is given between specific times on specific days for such things. The postman and milkman has that too.

And yes, city collections ought to be weekly at the minimum. In parts of Italy rubbish is collected every night through the night, although not all Italy has that organisation.