Afghanistan and Scotland's Lack of a Military Hospital Unit 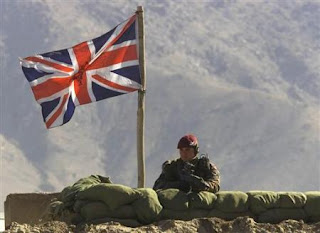 Two members of the British armed forces were killed in Afghanistan yesterday. One was a soldier from 1st Battalion Scots Guards and the other a Marine from 40 Commando Royal Marines.
The soldier, serving as part of Combined Forces Lashkar Gah, was killed by small arms fire while the Marine, serving as part of Combined Forces Sangin, was killed by an IED while on foot patrol. We have now lost 327 of our military in this unwinnable war.
The MSM seldom report casualties yet families of wounded Scots soldiers are treated worse than families of convicts. While prisoners can be sent to jails near home to make visiting easier, wounded Scots are treated in hospitals in England. That means families must travel hundreds of miles to visit loved ones.
There is one specialist military hospital in England plus five with specialist military wards and one in Northern Ireland. But there is none in Scotland despite two health boards being asked to consider making provision as long ago as 1999 - and despite Scotland providing up to 20% of the armed forces' manpower.
The Royal British Legion Scotland is demanding NHS Scotland, along with the MoD, work towards establishing a unit here. The charity has produced a paper making the case for a bid for an MoD Hospital Unit when contracts come up for renewal in 2011.
Meanwhile, Scottish-based families who want to comfort a wounded relative face journeys of several hours, and in some cases pay up to £200 a night for accommodation. As well as the Royal Centre for Defence Medicine in Birmingham, England has MDHUs at Portsmouth, Plymouth, Frimley Park in Surrey, Northallerton and Peterborough. There is also a military ward at Musgrave Park Hospital in Northern Ireland.
The MoD reimburses the travel and accommodation costs for immediate families of the wounded. Other relatives get no help whatsoever so RBLS has set up an initiative called TravelAid to help them. But it's the distance and inconvenience that are the biggest issue. For example, a family from Inverness would have to travel more than 350 miles to Northallerton and 450 to Birmingham, trips of over seven or eight hours.
The Scottish Health Secretary Nicola Sturgeon said the opening of MDHUs in Scotland was a decision for the MoD, however Westminster Defence Minister Andrew Robathan last week poured cold water on the idea. The MoD's reason is that IMDHUs are also teaching units and there would have to be sufficient volumes of Scottish-based casualties to maintain that. This argument carries the subliminal message that they wouldn't consider putting casualties from England or Wales in a Scottish unit when a unit in Scotland would be more convenient for families from the north of England.
It's long past time Scotland had a MoD Hospital Unit. A considerable part of any person's recovery from injury or illness depends on the level of support they receive from family and friends. Knowing your family is restricted from visiting because of distance will only add to the stress our wounded endure. Military medics often work in tandem with their civilian counterparts and therefore the excuse given by the MoD about volume is a fallacy.
source
Tweet
Posted by subrosa at 09:41

This is the Carham ambulance question writ large - although the nearest ambulance base to the village of Carham, Northumberland, is 6 miles away in Kelso, casualties have had to wait for an English ambulance from Berwick-upon-Tweed, 17 miles away.

It's not a case of unwillingness to help - it's that the computer systems simply will not allow cross-border transfer of patients.

The same is true of other computer systems - try ordering online groceries or appliance repairs in the wilder bits of Cheviot country and you'll find that their vans won't cross the border either.

(A trivial example, I know, but it illustrates the fixed attitude that has accompanied the ubiquitous Little Tin Gods of IT.)

It's an issue well worth raising, SR; given the drastic nature of the re-organisation of Scottish regiments, I'm amazed this question wasn't addressed and answered at the time.

It is sad that so soon after your previous post comes another intimating the tragic loss of more young lives.

There is an old adage of “where there’s a will there’s a way”, obviously not practiced by cash strapped health secretaries or blinkered MOD ministers.

I would totally agree that the MOD arguments are totally fallacious and do not stand up to argument.

Scotland is served by a number of excellent teaching facilities, Glasgow, Edinburgh, Dundee and Aberdeen. Many of the medical, theatre and nursing staff from these hospitals give of their skills, expertise and time to serve in the TA, augmenting the military’s medical services.

Scotland’s very own 612 ‘County of Aberdeen Squadron’, based at RAF Leuchars, is already providing medical and surgical field support. In addition Leuchars runway has been recently lengthened and relayed so can now take any heavy transport aircraft.

Scotland has the knowledge, the skills, the hospitals and the expertise to treat military casualties. All we need is the political ‘will’ to bring it all together at a single centre.

It wasn't addressed at the time Macheath because we had labour in power in Westminster and the labour/libdem pact here. None was interested in military matters or our wounded.

The new coalition don't seem interested either. Time for us to shout about it.

Good morning John. It's only one unit that's being suggested - a ward in other words.

As you say there are civilian medics who serve in the TA and volunteer to do work at the front line. The Scots involved would greatly benefit from having their skills kept up to date and personnel whose home and family are in Scotland or the north of England would also benefit.

This isn't a case of money really. The money is there. A brand new military hospital has just been built in Birmingham. I see this as another slight to Scotland. We've had this before of course. We were ignored for so long and that's why Erskine Hospital came into being, built and run by public subscription and opened in 1916.

There must be medical cases involving troops stationed in Scotland who, presumably, currently end up in a NHS hospital. Given that a military hospital will not have the full range of departments (geriatric, mental,A&E,cancer etc.) they should be less expensive than a civilian unit. Having a BMH would allow civilian units to strip out some costs and ease the stern budget reductions that they face from Margaret Thatcher aka Cameron.

That's true John because I understand the highest priority in MUs is trauma and injury care.

I can't see the MoD, run by Westminster, giving us anything here. They've stripped most of our military down to the bare bones.

The issue is that, war and some training injuries aside, the military is full of fit young people - so the embedded doctors get to see a lot of sports injuries, far too much drunken stupidity, an amazing number of STDs and the odd strange infection. It is simply not enough to keep the skill-set up.

Even with the battle damage included, A&E medics from some of the wilder heaths of London, Nottingham and even Glasgow are going to see more trauma injuries, arterial bleeds and such than on a shift at Bastion. It is the aftercare and rehabilitation - you don't get many multiple amputations in a bar fight (although motorbikes do a reasonable job on the spinal injury front) - that is becoming a military speciality. And, of course, the understanding of why you are there that was, in its lack, such an affront tto recovering soldiers in the earliest incarnations of Selly Oak.

What do we actually want in Scotland? A full trauma centre - well, there just aren't that many people based here anymore - or something more sensible? Although the "Scottish Army" is large, much of it simply isn't based here. Where do you go close to? Your regiment, with the formal support and your wife and kids if you are married; your original family home; the "recruiting area" for your battalion?

There are efforts being made to provide rehab facilities north of the border - you'll notice that the first regional "Army Recovery Centre" actually opened at Erskine in Edinburgh last summer?

Why couldn't we have a full trauma centre SE? It could be shared by civilians like many of the old MH's facilities were.

Indeed efforts are being made here, most of them by the likes of Erskine which is funded greatly by the public.

I would suggest many Scots would prefer to be treated near their family and friends. If they're injured in a tour of duty no point in being near your regiment because they're still deployed. Of course if you're married then the place to be is closest to your home. The choice should lie with the wounded if possible.

What is also needed is more attention to artificial limbs. The US is way ahead in this provision and there's no reason why our wounded can't have the same - other than money.