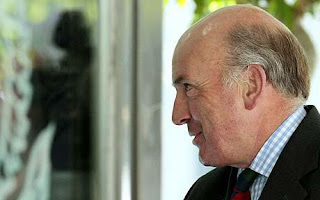 General Sir Richard Dannatt, the former head of the Army, has stepped down from his role as an advisor to David Cameron after a stay of only nine months. He was appointed to the post during last year's Conservative Party conference - just weeks after retiring as chief of the general staff.
An attempt to install him in the Lords was blocked in April on the grounds that he should wait at least a year before taking up a political role.
He clashed with Liam Fox, who has since been appointed Defence Secretary, for saying publicly he was brought in because the Tory front bench lacked 'expert understanding'. He was quite right and it still does.
Sir Richard said he always intended to step down after the election. On Saturday, in an interview on Sky News, he appeared to criticise George Osborne for insisting that the Ministry of Defence budget bears the full cost of replacing Trident.
“It is effectively being put on the table for discussion by asking the Ministry of Defence to pay for it, so the issue really is: how much safer will we be with a replacement nuclear deterrent as opposed to how much safer will we be with fast jets, aircraft carriers, lots of soldiers, tanks and artillery?”
If he's done nothing else in his short tenure, it is to be hoped his comments will widen the debate about Trident. Why are we storing a weapon we can't use without the authority of another country? Scotland doesn't want it and we have to make our voices heard.
source
Tweet
Posted by subrosa at 15:31

No matter how many times people say it, we do not need the authority, permission or approval of the USA (President, NCA or joint session of Congress) before the missiles can be launched or the warheads go bang.

Yes, if the Yanks decide they are not going to support us any more, we'll have spares problems after a few years but neither Polaris nor Trident actually needed US permission to launch nor did they rely on US-controlled systems (they don't rely on anything - both were designed to be launched in the total absence of shore-based support) to function.

I understood our nuclear weapons must be co-ordinated with those of the US SE. It was a senior naval officer who told me that years ago. Sorry, I must be out of date.

Still, why aren't we looking at modern methods of security? Knowing the MoD and how slowly they and our politicians act, anything ordered now will be well out of date when it's delivered.

That's slightly different - if we, and the US, want to launch together (for example, as part of a NATO response ordered by SACEUR and approved by the PM and POTUS - if such plans still exist) we do indeed need to co-ordinate the launch. Not permission, as such, but exactly the same way as you would co-ordinate an air or a ground offensive - to make sure your attacks didn't disrupt your allies efforts.

In nuclear terms, it is basically to make sure that one bomb going bang doesn't upset another bomb, which is still whizzing its way through the upper atmosphere and stop it from going bang (or even push it slightly away from a hardened target). That conflict is known as "fratricide". Having said that, in the wider "they can stop us from using" argument, your opponents having to nuke somewhere close to your own targets to stop you, is more than enough to make even Pyrrhus of Epirus go home and stop playing.

There is a completely separate question about the political relevance of nukes, however. Although, of all the weapons systems I know, ballistic re-entry vehicles with a thermonuclear bang (so they can afford to be a little off-target to avoid being taken out by point-defence directed-energy weapons), are probably the least likely to be obsolescent.

Especially as you could, in theory at least, add things to the re-entry platform or the warheads to harden them (hence the Chevaline upgrade to Polaris.) Although the size of the physics package is a pretty fundamental limiter on any warhead minimum dimensions.

As soon as the U.K losses it's nuclear defence capacity, how much louder do you think the laughter of other anti western nations become, especially as there is NO way the French will relinquish theirs, which by the way is truly independent and they wont be using their military to solve Britains problems, there is'nt a tank in the world that can survive a nuclear blast at battleground distances, things will get more precarious for the UK if it abandons the Trident. If this useless coalition actually tackled the huge heamorrage of funds that is illegal immigration, it would be able to fund a much better military.

Will someone please describe a situation in which we will use nuclear weapons independently of the USA (and therefore of NATO)?

Thanks for the explanation SE. I'll have to do a bit more research on this. Craizy Daisy may have something to add.

That's a question which I'm not sure has fully been answered Johnny. Does Trident make the UK safer?

I've no idea William. Perhaps some others can respond to you.