None Deserves My Vote 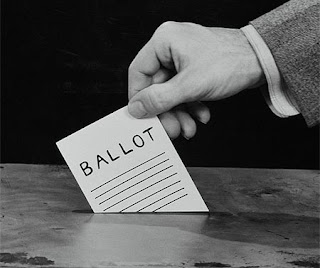 We've had the 270 minute talent contest which told me nothing. We've had wall to wall media coverage of the election campaign during which I learned a little. The pre-arranged 'walks to meet the people' with supporters bussed in to surround their hero with screams of adoration. The wives supplementing their husbands' physical attractiveness has encouraged millions of words of type from journalists.
Yet none deserves my vote. I'm part of the generation politicians take for granted. The over 60s. We've been written off in this campaign. Perhaps it's because we're not pretty anymore and therefore unsuitable for photo shoots or is it because we're not so quickly enthralled by a pretty face and vacuous words?
All I've heard about is our population is ageing which unspokenly infers we're a liability to society. Then there is the argument in England about caring for those of us who are unfortunate enough to suffer poor health in their older years. Another liability.
Plenty talk of the young, the need to improve education, jobs for the young (or lack of them) for the young, the child credits, the money given to parents on the birth of their first child - the list goes on.
If our politicians led by example and showed respect for the older generations in society then some of the problems with youths may be resolved. Youths can be taught to respect their elders if their elders feel they can interact with them but we're not encouraged to do so. Families are so fragmented there is no longer a generation chain in many cases so good habits are not passed down.
Never mind though, once my generation is dead and gone the NWO's social engineering plan will be complete. Everyone will have some form of reliance upon the state, be it Westminster or the EU. The pride my generation has in its ability to think independently and act in a similar manner will be no longer.
None deserves my vote although one will get it and I can only hope I'll be a liability for some years to come. It seems I'm not alone. There are older voters with a similar opinion out there.
Tweet
Posted by subrosa at 09:02

It's a good angle Subrosa and probably why so many parties have formed seeking to voice that feeling.

But when the politicos bang on about the wonders of youth, do they apply it to Westminster? I see Dennis Skinner is standing again at 78 and there are 7 others older than him. If he feels his experience is valuable, why can the political classes not see that there are millions of others with useful knowledge and experience being ignored or worse, patronised?

19 Year old candidates are an insult to voters. They are there merely as the first step in climbing the greasy pole.

'What's really important is what I want to do for my constituents."

Translate that into 'What's really important is that I can get my face in the trough and earn £60,000 without doing much'.

Thanks for the link Alan.

None of the main parties are getting my vote either.

You have eloquently and precisely expressed my own sentiments.

It might be a bit late for Thursday, but – couldn’t we persuade you to stand at the next election?

Auch John, you flatter me. I'm too old now. I've done my bit.

Anyway John, this campaign looks like a fitness one to me and not a general election one. It's all about superficiality and nothing about substance.

I wouldn't last five minutes in an environment like that and I'm sure you wouldn't either. We're too independent.

The remarks and opinions related to the elders of our population are advanced in a most pejorative manner.

Seemingly there are too many - they have failed to balance the next generation and the next with suitable quantity and quality of replacements - they are living longer and thereby increasing the burden on the NHS and other institutions of State - they have the audacity to expect to enjoy their twilight years and have the naivete to be due consideration and respect.

And why can none of these benchmarks be met, funded or implemented..... Short sighted, incompetent, lying, conniving, obfuscating, corruptly self benefiting government no less.

What more can I say RA? You've said it all. We're on the scrapheap now because we're not giving the treasury the huge amounts of tax we used to do when working full-time.