No Smoke Without Fire 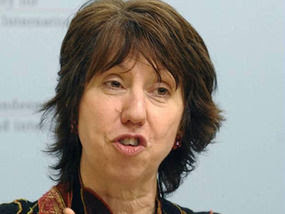 Baroness Ashton has been forced to deny rumours that she is poised to quit following widespread criticism of her performance as the EU's foreign affairs supremo.
Brussels sources said the Labour peer, appointed to the new £328,000-a-year job six months ago, was on the verge of resignation after opponents claimed she was not up to the job.
Some suggest Lord Mandelson, who long harboured ambitions for the job himself, has been spearheading a campaign to undermine her.
Surely the UK Business Secretary wouldn't behave so shabbily against one of his own? On the other hand, we all know that he enjoys forward planning. Where better than the arms of the EU to spend his senior years and accrue another few million to add to his already substantial pension pot.
source
Tweet
Posted by subrosa at 09:04

I know I'm naive, but I can't help to continue to be amazed at how they think they can justify those obscene salaries! AND she's pathetic.

Mandelson plotting? Surely not. Now, thinking about it, if Clegg holds the balance of power next week. Mandy may have to get rid of Gordy and take the big job himself with Clegg as his deputy.
He is maybe making a space for the Saviour, to ease his pain.

You're not naive increasinglymiffed, you're like much of the population who are shocked by the amount of money these people earn.

Let's not forget there are very generous expenses on top too.

I don't think Mandy would want the leadership job Rob. It's would be a demotion and I can't imagine him in opposition.

The Scotsman is saying today that there are rumours Alistair Darling is being groomed to take over as interim leader of they lose. Seems like Brown will get the bums rush.

The job is not available to Mandelson; it was in Brown's gift as the largest centre left member state leader, the centre right having nominated the President, and Brown traded it for no disciplinary action by the European Union over the UK economy till returned to power (those were the heights of his delusionary bombast). So the Commission and the President run EU foreign affairs and the nascent EU defence force.

It's no longer in the UK's gift never mind Brown's. What a shambling incompetent. Mandelson is engaging in New Labour spite - typical, just like Brown requesting Hoon's removal from the NATO committee, only this time they just don't have the reach.

There are a plethora of jobs being coveted for Labour at the moment. This is one of them.

Thanks for the explanation HG. I thought perhaps if she was shoved then another labour peer would be permitted to take her place. So another country would replace her.

According to HatfieldGirl it's not OR. There's no way a UK labour replacement would occur.

It seems the Scotsman rumours have been quashed Rob.

Can't see a Scot being in charge of Labour anymore. Brown and his cronies have turned hell of a lot of people off of Scottish politicians.

Baroness Ashton seems to be doing very little and keeping quiet. In that case she is doing a great job and should continue.

I wouldn't argue with that Billy.

A four day week too Demetrius, Brussels for Monday lunch, back home in UK in time for tea on a Friday.

Russia is too democratic to join the European Union.

It does seem that way these days RA.