Tories Accuse Mr Murphy of Breaching the Code of Conduct 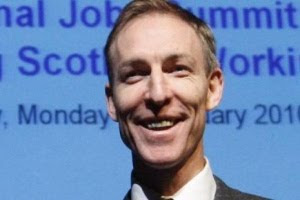 Firstly today we have Mr Salmond and his constituency problem in the news and now Jim Murphy, the Scottish Secretary, was at the centre of controversy after the conservatives accused him of allowing John McTernan, his spin doctor, to "break the code of conduct"for special advisers by agreeing to speak at a public debate on the future of the Union.
In a press release put out by the independent think tank Reform Scotland, Mr McTernan appears at the top of a list of speakers for a debate on "The Future of the UK Constitution", which is die to take place before an audience on 4 February in London.
After the Herald contacted Mr McTernan al alternative speaker was put forward, but he denied any breach of the code blaming "administrative confusion" for his name appearing.
The other speakers are all politicians and include David Mundell, Alistair Carmichael, Stewart Hosie and Jim Wallace.Francis Maude, Shadow Minister for the Cabinet Office said" "This is a clear breach of Cabinet Office rules and is yet another sign of how Labour's special advisors have run riot in Whitehall, creating a culture of spin and undermining the independence of the civil service. It speaks volumes that there is no Labour Minister prepared to stand up to defend the Union. Jim Murphy should have known better, as a former Minister for the Cabinet Office, than to have allowed his special adviser to break the code of conduct."
Here's the spin:
When approached by The Herald Mr McTernan admitted his name was on the list and that he was due to speak, but did not believe there was any breach of the code of conduct as he would only be putting forward Government policy. Later, however, he insisted there had been “an administrative confusion” and that, in fact, Ann McKechin, the Scotland Office Minister, would speak at the event. He added that he had been told by the Cabinet Office that even if did speak he would not breach the rules for special advisers.
Interesting last few paragraphs in the article regarding the state of No 10 and therefore the government:

Based on evidence from 60 senior civil servants, analysis published today from the Institute for Government, an independent charity which aims to improve government effectiveness, points says the office of the British premier has more concentration of power than any other developed country.

“In contrast,” it adds, “the fragmentation and lack of coordination at the centre of the civil service – the Treasury, No 10 and the Cabinet Office – leads to an administrative centre that is relatively weak. This curious situation has created a strategic gap at the heart of British Government, which inhibits the ability to set overall government priorities and translate them into action.”

I was going to remark on the picture accompanying this post but I think the saying 'least said best mended' applies.
Source
Tweet
Posted by subrosa at 15:38

The Future of the UK Constitution?

It's in dire straits. Largely because of its dysfunctional ineptitude and self imposed corruption; and its disposition to creating and developing democratic deficits.

Not only has it lost the paddle, now the creek is beginning to run dry.

Murphy's office has to be seen to be doing something to warrant the £millions being spent, especially with the SNP saying they shouldn't exist.

Hi Rosa. But they only exist because of the SNP being in office.

Exactly Crinkly. Given that the job was part-time for years and the holder of the office disinterested, it's being used as a labour tool to cause destruction to the SNP government. I thought departments had to be non-political.