'Scotland Will Do As It's Told' Says Scottish Tory Leader 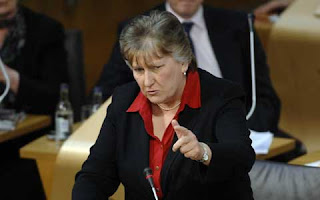 Annabel Goldie, leader of the Scottish Conservatives, told her audience at the Royal College of Surgeons last night that a tory victory at the general election would give her party a mandate to govern in Scotland regardless of how many seats it won here.
She emphasised that winning seats here was not a prerequisite for a mandate to govern, as the Westminster election was British, not Scottish.
"Let me nail this nonsense now. This is a British general election, to elect a British government and a British prime minister. People in Scotland want devolution, but they also want to be part of Britain, and that means they want to be part of the Westminster democratic process.

"Whatever happens at this British general election, whoever wins, unionism will beat nationalism in Scotland."
She said it was "predictable" that the SNP, with its "obsession for independence", would claim the Tories had no mandate in Scotland. But, significantly, she also appealed to Labour not to return to its "nationalism with a small n" of the 1980s and 1990s, which, she argued, damaged the United Kingdom.

"I ask Labour what is more important to them – the short-term future of the Labour Party or the long-term future of the United Kingdom?"
Strong stuff Ms Goldie and I think we understand. One or two tory MPs, maybe a couple more, and Scotland has to do David Cameron's bidding should the conservatives win the Westminster election. I don't think so.
Angus Robertson, the SNP's Westminster leader, said, "For Annabel Goldie to say that the way Scotland votes in a general election doesn't matter shows the tories up in their old anti-Scottish colours. It is a return to their North British roots - which was out of time decades ago - and will be enormously damaging to them in the election campaign."
Don't say you haven't been warned Ms Goldie.
Source 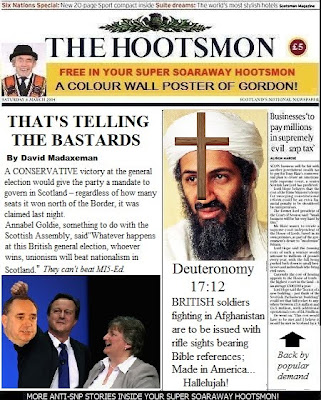 A no-brainer, this one.

When a ZaNuLabour drone is elected they swear to protect, in this order:

Or am I being a tad cynical?

CR, no you are not.
As for the blog title, that is not how I read the speech. It is surely fair for we Unionists to claim that we want Scotland as part of the family? Divorce is never without casualties. That some Scots still hanker after the history of strife and hatred of their English cousins is rather disappointing and often racist.
Surely your revenge has been massive on us English these last 13years?

Who would have thought that a silly old trout was electioneering for a Salmond and a Sturgeon?

Yes of course a unionist will win the GE in the UK - probably a Tory - but without a political foothold in Scotland, or Wales and Northern Ireland for that matter, the SNP "obsession" for Independence rests its case?

Sorry about the last 13 years OR - but didn't the English party MPs vote them (or not) to office?

Oh do come on Subrosa you love the English Conservatives. it's not gonna bother you one bit to be ruled by Camerons Mob at Westminster..

You sing the English conservatives praises day after day thats why all the rabid right Tory loony tunes like your blog!

We've been preached to like this all my life OR and although you didn't read the speech as if the headmistress was telling us off, I think many Scots would.

What revenge OR? I'm certainly not for revenge and I do apologise for the present government being in power purely because of Scottish MPs but the west of Scotland is where the labour vote is. The rest of Scotland is realising where to vote sensibly and where I am it used to be a strong Tory vote but has been a strong SNP vote for 14 years now.

She did a good job didn't she Clarinda? Poor Or he doesn't understand how we feel here.

To put it conversely, didn't the English vote the tories out of power? It wasn't Scotland which did that.

Morning Niko, it'll be a challenge but one I'm up for. :)

Niko, are you sure you're referring to my blog? Fair enough, I give little credit to labour but who does these days.

I write as I find Niko, sadly there is nothing positive to write about your party except their incompetence, lies - the list goes on and on.

'Scotland Will Do As It's Told' Says Scottish Tory Leader.

Just as you always have lmao :-D

Oldrightie, corruption and incompetence recognises no frontiers or nationalities, its sole aim is to become endemic.

Westminster (note I don't write England), its institutions and establishments are riddled with this pox; why should it be sustained?

Divorce between consenting adults is usually a more informed and cognitive choice than the decision to marry.

Democracy holds the key, yet this woman denies it, then claims its rights by default?

In the absence of a referendum on Scottish independence, the best thing that Scottish nationalists can do is help get the English Question on the agenda, and you can do that by voting for English Votes on English Laws.

English Conservatives, I'm a supporter of independence and I usually support the SNP. No SNP MP has ever voted on English only issues in the Westminster parliament.

I entirely agree with you, but it would be better for you if you targeted labour and tory blogs.

QM, only two thirds, not all. Mind you two thirds is far too much of course. We're working to reduce it. :)

Yes the Tories need to be consisent. Cuddly Dave talks about devolving power down to local schools, hospitals , etc. Everyone nods.

Then his London spindoctors provide Aunty Annabel with some dumb questions to ask at FMQ, as she did last week.

You've got to walk the talk about devolution Tories.

Great saying 'walk the talk' Strathturret. May I use that in my FMQ post once I've watched it?

Oh God - how embarrassing! It's people like her that give the Tories a bad name! I agree with English Conservatives and wholly support Scottish independence (as I do Welsh and Irish) :-)

TT, I'll be posting my usual FMQ post once I've seen it and I put the link to the half hour at the end. Have a look some week if you can and watch how we do - especially the Scottish tories.

SR feel free. All the best things are stolen; I first saw it from some American management guru, Tom Peters I think!

Annabel Goldie perhaps needs to go back and re-sit her constitutional law exam - she seems to have forgotten the finer points of Scottish constitutional law. She would be well advised to stay away from whether the Tories will have a legal mandate....

I have blogged on this today at www.republic-of-scotland.blogspot.com.

Basically - sovereignty lies with the Scottish people, not the UK Parliament, and her comments prove that the Tories still don't get it.

It would be interesting to get folk's view on this: once the Tories win power at Westminster, what will Labour MSPs do? Back Westminster no matter what, as they do at the moment, or use Holyrood as a vehicle to oppose the Tories?

The latter, I hope. But I wouldn't bet on it - with some of them, sadly, their unionism trumps their politics.

Labour will try and steal the SNP's clothes. We'll see the Labour feeble 'whatever the number is' wrap themselves in the Saltire and 'defend Scotland from Tory cuts'. God help us!

Just found your blog and am now following it!

Naw, scratch that, Unionism just trumps anybody's common sense this side of the border.

Interesting position for the Tories to take. They expect to win in England but lose in Scotland, and require the aid of Labour to prop up their claims of legitimacy.

Funny kind of democracy where a party claims a mandate where they have no support.

No taxation without representation springs to mind.

You know what followed that.

I take the comments on board and I am not anti-Scottish just because I'm a Unionist. A referndum would be useful sooner rather than later and if won for Independence I would happily proffer my English passport for a stamp. Well, I dream because it's really an EU document these days. A UK voice against a Federal Europe is better than an English lone cry in the wilderness.

Definitely think labour will back Westminster regardless, they've done nothing else for 50+ years and they're not going to change now.

As you say they're unionism overrides their common sense.

Aye scunnert and she's forgotten it's exactly this attitude which has put the tories in the wilderness all these years.

I know you're not anti-Scottish OR as many readers do and I certainly respect you as one of the few sensible unionists around.

It's not going to matter whether it's a UK voice of a Scottish voice in the near future OR, it will be a Region 9 voice from here.

Poor woman probably has sniffed a bit too much fumes from the train into Glasgow...

Nope i don't know which planet she comes from either. 1 MP, 2 MP's or 4 MPs out of 59 does not or ever will constitute a mandate to govern a country. With counting like that, I can't wait for Boy George's calamitous handling of the ecconomy to begin.

Have to agree with you Allan, along with perhaps millions from south of the border, that the tories won't make any difference, sad to say. But then perhaps that's good for Scotland.

Cameron went from Eton to Oxford, then Tory Party HQ, then a couple of years of PR, then MP.

I doubt if either could run the proverbial whelk stall!

I think that's why even tories don't have much faith in DC Strathturret don't you.

The Tories who don't like DC of course are the Thatcherites who are rabidly anti EU. Yes I know maybe the majority these days. These people tend also see us Scots as subsidy junkies.

There are not many 'one nation' Conservatives left. Heath and MacMillan are seen as beyond the pale by most modern Tories but both had more real world knowledge in a toenail than the whole Shaddow Cabinet.

This differs from saying that Labour was entitled to form the last UK government despite more English voting Tory than Labour exactly how?

Hey Strathturret, I'm not so keen on the EU myself but I don't see us as subsidy junkies.

You're bang on with your second paragraph.

It differs insofar as the percentages were rather different neil. Pro rata there were far more labour voters in England than there were tory voters here.