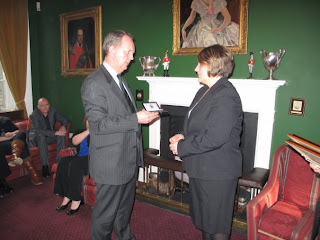 Rose Gentle receiving Gordon's medal
Many of you will recognise the name of Rose Gentle. Her son Gordon was killed, by a roadside bomb, in Iraq in 2004 and she has fought long and hard against the legality of the war and is determined to bring Tony Blair to justice.
She made repeated requests to meet Tony Blair to discuss the war yet he refused. She even made a video letter to Cherie Blair with no result.
Mrs Gentle was part of the pre-Chilcott Inquiry when she, along with our families, were asked to list questions they needed to be answered.
Rose blames Tony Blair for the death of her son. She consistently says he was the person who led our military into an illegal war. She requested to be present when Tony Blair was giving his evidence. We all know now Tony Blair is to give his evidence next week. Mr Blair has done everything in his power to silence Mrs Gentle over the years.
On her Facebook page, a couple of hours ago, Rose wrote this. (I've no idea who sent her the email/letter as yet but I'm assuming it's from someone in Lord Chilcott's office).

'I thought I should let you know as soon as possible that you were not successful in either the families draw or subsequently in the main public draw for the spaces in the hearing room for Tony Blair's hearing on 29 January 2010. We have, however, arranged for you to have access to a dedicated additional viewing room reserved for families for the duration of Mr Blair's hearing.'

The families' names were entered into a draw - can you believe it? 'The draw' has decided even now that Mrs Gentle won't even see Tony Blair in the flesh but only from another room. Can you comprehend such an insult.
Mrs Gentle should have the opportunity to see the back of Tony Blair's head and not through a screen in another room. Is there a politician out there who will question this decision and ensure at least Mrs Gentle receives her day in the presence of Tony Blair? She deserves nothing less.
Tweet
Posted by subrosa at 20:21

It is insulting. It is sickeningly insulting.
I do not know why we as a nation continue to accept being treated like this by people who appear to think of themselves in some laughable old fashioned way as our Lords and Maters. How dare this man who sent Gordon Gentle to his death while he cheese pared to reach yet more ridiculous cost cutting targets, all the time pretending to be the kind of leader of 100 years before; important and influential on the world stage.

He is pathetic. For all his Fettes and Oxford education he was taken for a sucker by George W Bush. George W Bush for heaven’s sake. A man who can barely string a few words together to make a coherent sentence. A man whose Daddy’s money paid for him to go to an Ivy League university and but for which he would have left grade school and gone to work on a ranch as a wood chopper. He is not fit to speak to Mrs Gentle. It should be she who refuses him an interview.

It is beneath her dignity to be in the same room as him, but she’d do it for her lad. She’s worth a thousand of him.

"Can you comprehend such an insult."

From Labour we have to bear the insult of war per se. All for egotitistical or political blackmail. Whilst thousands of dead and terribly maimed young people and theitr families will never again be the same. These cretins, Bliar in particular, get ever richer. Disgust just doesn't cover it.

If a ticket holder has any decency then they should offer it up.

This was a crass decision.

I think Rose just wants to see him in the flesh Tris. I doubt she would make trouble at all but her desire is to see the man she thinks was responsible for her son's death.

Blair, Brown, Campbell, the trio OR, all laughing at us being so trusting.

Yes they should Jess. I read somewhere the room is very small. Who is more important than the woman who's led the fight for this inquiry?

It goes beyond "insulting" - how moronic are those who think that not specifically enabling people with the moral and legitimate stature of Rose Gentle to attend the main venue, would appear good sense in the puplic's eye?

It's not merely "insulting" it's contemptible and defamatory but, ironically, increases the integrity and dignity of the relatives of the dead and wounded compared to the imbeciles who thought a family raffle was the best option.

If it's possible for Mr Blair et al to sink any lower - they will be able to shake hands with the Devil himself sooner than expected.

Thank you Clarinda, I knew I could rely on you to say it as it is.

I'm sure many others echo your opinion. My intention was to keep my anger low key so as not to upset Rose at the time but I'm sure she'll agree with you.

I have no great hope for justice to take form from the Chilcot inquiry.

It's merely an extension of attrition designed to deepen, not lift, the fog of deceits that Westminster practices.

The lie is known, self evident and proven - any discussion as to why it was created is peripheral and redundant.

I should imagine what Rose wants, other than to turn the clock back, is to see the accused in the dock and facing justice. A justice that doesn't recognise political mumbo jumbo as mitigating factors against capital crimes.

This is the last thing the establishment wants and they don't mind how much of our money they have to spend in order to bury it.

I suspect you're right Crinkly, her objective is justice which, I'm sure she already knows, will never happen except in history books to be published in the distant future.

It's so appalling it was all negotiated by raffle. That shows us more about this Inquiry than the verbosity of the interviewees.