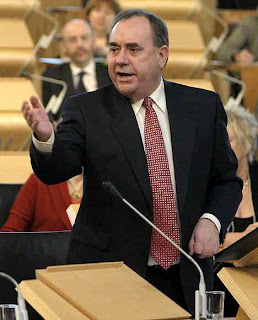 The SNP's policy on immigration is one I find too loosely defined. It appears as if they would welcome everybody and anybody into an independent Scotland. I disagree with that. We need very firm controls on who enters the country or we will rapidly become the country which becomes known as a 'soft touch'. I don't mean a country which lacks compassion because we do, but we will need to be stringent in our vetting of immigrants.
The Telegraph is reporting Alex Salmond was approached by a local restauranteur, in his constituency office town of Peterhead. The businessman, David Yau, asked Mr Salmond to appeal to the Home Secretary Alan Johnson, on behalf of one of his employees Zheng Bin who wanted to stay in Scotland.
Mr Salmond wrote to Alan Johnson asking him to give "favourable consideration" to Zheng Bin being allowed to stay. He said the man had many friends in the fishing town and had 'integrated' well with the local community. I bet he did. It is well known Peterhead has one of Scotland's most serious drug problems.
Mr Zheng is an illegal Chinese immigrant who was refused asylum in 1998. His appeal was also unsuccessful. In 2007 he was still in the country and was charged by Strathclyde Police with drug offences over allegations he used his home to grow and produce cannabis. After a month in Glasgow's Barlinnie jail, he was released on bail but failed to attend a court hearing in July that year and a warrant was issued for his arrest.
He was working in the kitchen of the Shining Pearl restaurant (Mr Yau's business) in Peterhead until it was raided last week by Grampian Police and the UK Border Agency.
Mr Yau was breaking the law employing Mr Zheng. The law states illegal immigrants cannot undertake paid work. Surely Mr Salmond, or his staff member who dealt with Mr Yau, knew that.
Mr Yau now faces a fine of up to £30,000 for employing illegal workers. He said: "I'm angry at Zheng for not letting me know the situation." He only has himself to blame for employing someone illegally.
Mr Salmond should put his hands up immediately and say he, or one of his staff, got it wrong - very wrong. Don't give pathetic excuses, a sincere apology is far more effective and it would bring a breath of fresh air into the political scene where half-truths and excuses are the norm. Leave it to fester and his political opponents will use it as a stick with which to beat him.
Efrafandays has his slightly different take on it.
Editor's note: I see the Telegraph had three anti-SNP articles yesterday. Quite an interest from a London based paper wouldn't you say.
Tweet
Posted by subrosa at 08:13

Cheers for the Hat-Tip.

I am not axiomically opposed to Independence. What I do object to is political influence being held by such reactionaries who would consider anyone being held by the *UK* Border Agency to be a victim in need of help, and not a known drugs producer.

Not the way to run grown-up politics, eh?

What's the piccie I use on my blog? Why, a little dope, of course.

PS Zheng is his family name.

It's an error by Salmond Alec but hopefully he'll be man enough to admit it. To be honest the case was most probably dealt with by someone in his office who was inexperienced and Salmond just put his name to Alan Johnson's letter. But that's not an excuse.

We all make mistakes and the quicker he puts his hands up the better.

Ah right thanks. I know nothing about Chinese culture as you can see. :)

I'll cheerfully accept a sincere apology, but to be honest, I don't think he's capable of it. Based on past preformance, it would be along the lines of "whoopsie" or "hey, no-one's whiter than whiter" with the passive aggressive implication that we're being unreasonable for pressing him.

He'll then say "now can we go back to basking in my glory?" and insist we talk about anything else which he has decreed to be more important to Scots.

It shouldn't matter if this was dealt with by a staffer... the buck stops with the MP, and he lent his name to it.

Alex, I'm not making excuses for him. Of course the buck stops with him and he knows that.

Do tell me of any politician you know that would hold their hands up and say sorry. I can't think of one in the past 25 years.

Very few. Nigel "in a romp" Griffiths resigned over support for Trident, as did Eric Joyce over troop funding. I do have a soft spot for Anne Widdecombe.

Lest anyone think this is an anti-SNP rant from me, I don't like it when Labour politicians employ illegals and then compare it to dodging the congestion charge.

I haven't taken it as an anti-SNP rant from you Alec but I realise there's no love lost between Alex Salmond and yourself.

For my money he's the best politician Scotland has at present, closely followed by Nicola Sturgeon, John Swinney and Derek Brownlee. Yes three of them are SNP but that's my (trying to be objective) opinion.

Mr Salmond should put his hands up immediately and say

A blind Labourite follower talking about honesty? Get those kettles and pots cleaned first!

I am not without respect for them (and Brownlee's name makes me laugh almost as much as Brownsword), but do think their travel-card expired a good few years ago.

I take a lot of people as I find them.

Sometimes I'm wrong, a few times I'm right - most of the time, it simply doesn't matter..

Why should Salmond's experience be any different. At least he'd the common decency to try and help the individual involved.

Afternoon Niko. I think yer a wee bit confused there. That's the labour party one as the whole of the UK knows to their cost now.

Auch OR it's oil off a labourite's back with Niko. :)

Jings Alex, Brownlee's only a youngster. They're all far younger than me. I'm upset now. I thought I stood a fair chance of standing as an independent if I felt like it. Ageism that's what it is! :)

Alec, the Record is just parroting the other papers. Nothing new there.

Auch Crinkly, he's messed up here but hey, better to mess up trying to deal with the matter than what used to happen to me where I last lived.

He really should just apologise and folk would respect that.

The MP never even bothered to reply to anyone. Did absolutely nothing. Guess what party? Aye that's right and he's still there taking his large six figure sum every year.

Lets not forget that the Home Office employed illegals as security guards!

My understanding of 'Scottish policy' in this area is we need more young people who wish to work. Jack Mcconnell also pushed for different treatment of immigration to Scotland.

I do think an independent Scotland has to be careful about its immigration policy though. We don't want a reputation as the shelter for the world's criminals.

You should tell the SNP, that, what with a certain someone introducing Hamas commanders to Linda Fabiani, or other SNP outreach to Libya. Or remembering where Dawalat Khan Nasir lived.

With the way things are going in Iran, maybe Salmond soon will be pleading leave to remain here for those Khomenists he thinks are closer in spirit to the Scottish foreign policy.

My point about those Snuppies was that they're rooted in SNPdom of old - not the Nazi-addled stuff, but one which hasn't got to grips with globalization and mass-immigration.

Yesterday, I'd assumed that Salmond had written after Zheng was arrested... but the Record cleared that up.

Alec, I am not a member of the SNP and have no contact.

I am a supporter of independence for Scotland.

The Telegraph story, for me, didn't say Salmond had written after the arrest.

Remember though what Strathturret said, the Westminster government employ many illegals.

I know two wrongs don't make a right but certainly the labour party can't criticise one error like this with their lack of control of immigration systems.

Awfy nice of the wee man going to pop into the Maldives on his way to the Commonwealth Games.
Maybe gate-crashing the Copenhagen summit wizney so daft.
Is King Eck still lifting two hefty pay pokes?
We really are mugs.

One pay poke goes to a Trust fund Ronnie because I'm sure you know the law didn't allow him not to receive it.