Getting Out While the Going's Good 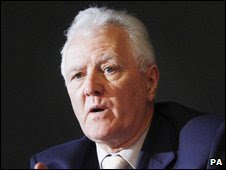 John McFall, the labour MP for West Dunbartonshire, has announced he's standing down and will not be contesting the general election. Having reached the age of 65 he considers it's time to pay more attention to his other interests.
He is perhaps better known as the chairman of the Commons Treasury Select Committee to which he was elected in 2001 before being re-elected in 2005 and was prominent during the banking crisis when his committee interviewed high profile figures such as Mervyn King and Fred Goodwin.
Also he chairs the All Party Parliamentary Groups for the Scotch Whisky and Spirits and the Royal Navy and is vice-chair of the South Africa Group.
Two other chairmanships he holds outwith Westminster are the Strathleven Regeneration Company and Clydebank re-built, two development companies based in his constituency.
Mr McFall, prior to becoming an MP in 1987, was a chemistry and maths teacher in Dunbarton and his majority at the last election was 12,553.
West Dunbartonshire is a labour stronghold but it's interesting to note that when he was first elected in 1987 his majority was just a little over 2,000. The then Dunbarton constituency was replaced with the new West Dunbartonshire constituency in time for the 2005 general election.
Candidates for the general election have yet to be announced. It would be quite a task for the SNP to challenge the 30.2% majority of John McFall, but then again stranger things have happened in Scottish politics in recent years.
Addendum: Cathy Jamieson will stand for former defence secretary Des Browne's seat. She was selected as the candidate for the Kilmarnock and Loudoun seat which Des Browne won with an 8,703 majority in 2005.
source
Tweet
Posted by subrosa at 15:01

They would have to be fantastically strange for the snp to even come within a whisker.............and then there is always the postal vote

With the retirement John McFall we see the passing of that rarest of creatures, an honourable MP who genuinely cared.

I may not have agreed with his politics, but I admired his gritty determination, especially as chairman of the Commons Treasury Select Committee.

I hope he has a long and happy retirement.

ConservativeHome recently published a poll of Tory members that found reducing Britain's carbon footprint was a low priority for the next generation of Conservative MPs.

This letter from David Cameron's office to a correspondent has just been drawn to my attention:

"Thank you very much for getting in touch with David Cameron about your concerns over the integrity of climate scientists at the IPCC. I apologise for the delay in replying but over the last couple of months there has been a huge increase in the number of e-mails David has received each day and it taking us a little longer than usual to reply to each one.

I can see that you feel recent allegations have cast doubt over the case for climate change, and the integrity of the science. However, our view is that public policy on climate change has been built over many years, with input from a wide variety of expert sources, and we do need to significantly reduce our carbon emissions.

It is always right to keep an open mind, and question scientific theories. But, those in favour of doing nothing on the basis of scientific scepticism need to show that the risks we run by not acting are small and manageable. Given all the information and evidence we now have, that is a very difficult case to make.

Indeed Niko ' and there's always the postal vote'. Says it all really.

He does John, I agree. Like you I don't always agree with his policies but he took his job seriously. He also was what was commonly referred to years ago a 'self-made man'. Like many of my generation he didn't have the privilege of going from school to university but did it the hard way by studying, often in his own time, to improve his knowledge. I too did it that way and I know how hard it was, both financially and time-wise.

Today's young people would no more think of spending 3 hours in a college or university after a working day of 9 -10 hours than fly in the air.

Niko I've just posted something about that. Dave had best back pedal quickly or else he'll be seen to be supporting liars.

Great news about Cutie Cathy - strangely enough I'll be canvassing in that area in case she needs a PA.

Well, well Brownlie, you're now a 'person annonimus' for Cathy. I will remember your change of status believe me. ;)