The Oil Isn't Running Out 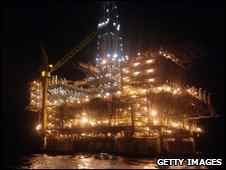 How often do we hear the Westminster government saying oil is running out in the waters round our shores? It's an argument used by the UK government to persuade Scots that their 'pot of liquid gold' will soon be no longer.
Therefore, it's little wonder this story hasn't received a mention in the Scottish or English dead tree press or from TV or radio broadcasters.
Faroe Petroleum, the independent oil and gas company focusing principally on exploration, appraisal and undeveloped field opportunities in the Atlantic margin, the North Sea and Norway, is pleased to announce the results of the side track appraisal well on the recent Glenlivet gas discovery, West of Shetland.
The side track was successfully drilled and confirmed the lateral extent of the high quality gas bearing reservoir. Based on the preliminary logging data, the results exceed the prognosed net gas column and reservoir quality.
The partnership has decided to drill a second side track appraisal well.
Graham Stewart, CE of Faroe Petroleum commented:
The Glenlivet well is the first of a firm five-well Atlantic Margin exploration drilling programme which Faroe is undertaking over the coming months. On Tuesday 29 September, Faroe announced the spud of the second well in the programme, operated by OMV, which will test the Tornado oil prospect, located close to BP's producing Schiehallion field. Following Tornado we are scheduled to drill three further high impact exploration wells, the Anne Marie oil prospect in the Faroes (operated by Eni), the Cardhu oil prospect in the UK (operated by BP) and the Lagavulin oil prospect in the UK (operated by Chevron).
Credit to Jeanne Tomlin for her astute observation.
Tweet
Posted by subrosa at 08:28

Aye the long noses of Westmidden and no doubt they'll try and split Sheetlin fae us tae!

You're readin ma mind CD. I was thinking that very thing when I was typing the above. Nuthin wid surprise me at al'.

I'd prefer a Talisker one Conan but I'm not that fussy as it's only a very occasional drink with me. Mind you with the colder weather setting in a toddy more often would slip down fine I'm sure.

But this isn't the only thing that's being kept from us. It's such a spider's web of outright lies & half-truths designed to obscure and confuse. All the news/blogs are too damned depressing today.

They are indeed GV, I haven't come across a happy post yet.

Think I'll give up reading until later. As you say it's all too depressing.

Fear not there is a Talisker one too.

I had no idea oil and gas fields were being named after malts.One major export of Scotland named after another one.Is it a feindish plot by Westminster to hide the full amount of revenue being raised?I think we should be told;¬)

SR if you are hoping that this GAS well will help the economy much then you are dreaming. We are still finding small pockets like this all the time, some will be commercial, some won't especially as we now are getting cheap gas from Europe. The area it was found in is looking reasonable but not great and is pricey to produce from.

When I read this, I didn't know whether to cry "Ochone, ochone!" or "McCrone, McCrone?" - again.

I must say I like the sound of "Put a Lagavulin in your tank" but its all very confusing especially as Lagavulin is a corruption of the Gaelic "Hollow of the Mill" which could be confused with another energy source.

My uncle used to work in the Talisker Distillery and for years I thought whiskey came in lemonade bottles but Talisker is too peaty for me.

I'm away on Wednesday for a few weeks so don't sit under the apple-tree etc etc!

Ah Conan, you cynic you.

I think we should be told too.

FL, I'm told they wouldn't be doing this if there wasn't the usual profit in it after the exploration work.

Then of course you're in the know too.

I prefer McCrone Clarinda, somehow I associate it with white faced, shaking unionists.

It's not quite as peaty as some brownlie although my favourite is Macallan.

You've just reminded me, I must harvest my James Grieves.

Be good now - you know the consequences. :)

Oh how I wish Dram, if only we would see some sense at last.

We've been running out of oil ever since I can remember ( 1970's at least ) but wheneevr I meet someone from the industry they are never expecting to be redundant anytime soon.

Exactly banned and these people wouldn't be spending all this money on exploration if there wasn't barrel loads of cash involved it in too.