Douglas Alexander - Busted by the Sun 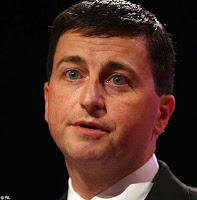 It was just a couple of weeks ago I was reading somewhere how Dougie Alexander's expenses were in order with small exceptions.
Now it seems Mr Alexander has paid back £12,600 to the Treasury, a sum he received in rent from a lodger at a home for which he was also claiming taxpayers' money. He bought the property, in his constituency, with a sitting tenant and claimed £73,000 in second home allowance and received rent from 2001 until 2005. Mr Alexander said that, when he bought the house, the tenant was living in a single room building of the property. What is a single room building of a property?
He also said he reduced claims for mortgage interest to cover the rent received until the tenant moved out in 2005 but "for the avoidance of doubt" he has now decided to pay back enough to cover what he received in rent.
Nobody, not even the son of the manse Mr Alexander, could convince me that he didn't but this property purely as a property speculator. Only property investors buy properties with sitting tenants.
Seems like someone was onto Mr Alexander's nice wee earner, hopefully a Sun reporter. Dougie is known to like having his photograph in the Sun and he has a lovely one today, so he must be pleased.
Tweet
Posted by subrosa at 23:02

He is a digusting little owl that man but if he never did anything wrong then why is he handing back £12,600 ? lol its taken me 10 years to save almost the same amount up ever since i got my first bank account yet this man can just hand this sort of money back becouse he did nothing wrong ?

Yeh hand back the money before the police get involved, it really does make you laugh, steal summit then put it back then all if forgiven.

He should be done for fraud Spook. Second homes allowances are for the MP to use a THEIR home, not buy one with a tenant already in it.

I always find little Dougie a bit irrelevant to be honest - but nevertheless, straight as a die!

Seems this is not the case, and he's had his snout in the trough the same as all the others!

Reap what ye shall sow and all that ;-)

He's just as much a devious little barsteward as the rest of the Scottish labour cabal TP.

Lovely day here, time to get out in the sun now.

Another thieving little swine, and the other one mentioned in the story too....Rosie Winterton

The thing is that they have all made so many mistakes. None of it was intentional, it's all been oversights and accounting errors.

They seem to me to be a bunch of total incompetents that shouldn't be left to make the tea lest they put bovril in it, by oversight of course.

Not one of them who has defrauded the taxpayer should be allowed to stand again tris. Alexander and Winterton come into that category easily.

She's around somewhere OR, still taking her large salary.