More Spin from the MoD 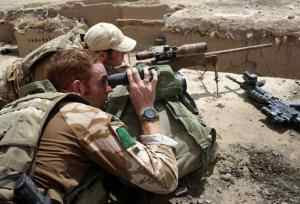 Yesterday it was reported that an Army officer, who works in intelligence, described the British presence in Helmand as an 'unmitigated disaster' fuelled by 'lamentable' government spin and naivety. In the British Army Review he wrote 'Let's not kid ourselves. To date Operation Herrick (the British codename for the war in Afghanistan) has been a failure.'
Anyone with the slightest interest in what is going on in Afghanistan knows that this war will never be won and that our troops were sent there to suit the will of politicians. Since the Iraq war this government has no hesitation in sending thousands of the military into the front line of badly planned operations. It seems they intend to keep them there for some considerable time, as the video I posted last week shows that permanent buildings have been erected to provide accommodation and house supplies. This is a move welcomed by the troops as, living under canvas in temperatures of 40 degrees plus, is unbearable for any length of time.
British generals are said to want 2,000 more troops now but Gordon Brown is against this apparently on cost grounds. What price does he put on the death or seriously maimed soldier? A fraction of what many get in, for example, sexual harrassment cases.
This morning we are told the government is to provide an extra £1bn which will be spent on improved body armour and other equipment taking the cost of this was to £2,623m this year. An MOD spokesman said, "We're spending more money to improve protection for our troops." Then I read none of the equipment will be supplied until next year. Is that January or December? Many lives can be lost in eleven months.
Another British soldier was killed yesterday. Major Sean Birchill was 33 years old and the Commanding Officer of Number 1X Company, 1st Battalion Welsh Guards. The total dead now stands at 169 since this all started in 2001.
Read another newspaper and there's a headline 'Army faces biggest cuts since Crimea.' The Times states the MoD intends to cut army manpower to its lowest level since the Crimean war. Plans to axe three infantry battalions, a total of 1800 men, are being discussed despite the overstretch caused by the wars in Iraq and Afghanistan. One battalion from each of the Yorkshire Regiment, the Mercian Regiment and the Royal Regiment of Scotland will go. This would see the size of the army drop below 100,000 for the first time since the 1850s. The army is so desperate to protect funding for Afghanistan that it could offer cuts only in infantry units to meet demands for savings.
So reduce troop numbers, saving millions, then spin 'extra' investment in troop equipment which may be still be completely inadequate and the present government expect us to believe our troops are being well looked after. How many of us believe this I wonder.
Tweet
Posted by subrosa at 09:58

The Soviets sent in more fire power than the UK or USA could ever had yet they did not win.

There's no politician at Westminster who has a clue about wars, hence the lives of soldiers are cheap.

I read somewhere - I could find it if pushed - that the mineral reserves of Afghanistan are immense so a 'Western' foothold here before the Chinese is thought to be a massive reason for US (in partticular) establishing bases. The mineral calculations made by a broad range of international experts (including Afghanis)were regarded as only superficial and could be even greater than imagined.
As Gordo sold our gold reserves for peanuts - perhaps he's carrying on a tradition of Westminster sucking off natural resouces from other subjugated nations? The Falklands was partly to retain Antartic mineral resource claims. All this guff about the 'WAR' against terror is a smoke-screen for capital accumulation at the expense of the plebs - what's new?

Unfortunately, to admit that would make the UK sound like a third rate smallish poor nation, and no one is going to admit to that, true though it be.

The politicians will continue, as they always have (see Kipling) to treat the military with disdane, except when they hide behind them for electoral purposes. The military are a soft touch in a way, because they can't fight back.

It is sickening, and I really mean that. Perhaps, because they can't fight back, we should be doing more to support them, and fighting on their behalf, and I'd welcome thoughts about how that could be done, from people who have involvement.

Perhaps one of the most sickening things I ever heard was Brown and Hoon lecturing us about how we should go out and cheer the military when they returned. This from people who were denying them essential kit.... Scum.

AMW. I completely agree. Not only the Soviets with the biggest military machine in the world, but the British in the days when there was an empire. In fact it was reported somewhere that Afghans themsleves shook their heads in wonder at the stupidity of the West in thinking, despite all the history that suggests the contrary, that they would ever win in that country.

Someone posted Kipling's poem Mesopotamia on the Independent site. It's very apt.

If you have a brain you will find good work.

If you have half a brain you will find teaching.

If you have no brain you will find parliament.

We do what we are told by the beast. We have no soveriegnty of our own. Troops out of foreign countries now! We can't impose democracy with guns because then it's not democracy.

To complete your classification:

--And if you are non-sentient microbial matter living on the unscoured bottom of a bedpan found in the abandoned ruin of a leper colony, you will criticise teachers.

Sorry to split flagella but how can a non sentient bug criticise anything, let alone teachers.

Slow day on the beach here.

Nobody has held Afghanistan since Alexander the Great. It's a tribal country and they fight using tactics that puts a conventional Army at a disadvantage. If even an armchair observer like me can figure that out, then you have to wonder what parallel universe the current Govt are living in. To put UK troops in this arena is bad enough, to put them in this arena without the right equipment is criminal.

We need to get rid of these muppets post haste.

A poster called Faux Cul asked for a link to a TV prog. I think he was looking for a Youtube link. Whether he got it is immaterial.

I believe he posts from somewhere in Europe and doesn't have good old British TV. Most of the adverts promising this only give you a handful of rubbish.

As I'm not here much (work dear boy), I should be grateful if someone would post the following.

There is a programme in Beta FORM called FilmOn.
Download this programme and you will get:-
BBC1, BBC2, ITV, CH4, Film4, CH5, BBC News, Skysports news and a host of others. The quality is HDi.

Unfortunately there are a number of XXX-rated movies as well. I suggest you click the *I am under 18* and you'll not be subjected to the depravity that some humans get up to.

Be quick because the FilmOn player will probably be pulled one of these days - as did one of the actors when I clicked the wrong button.

I won't post this again. Maybe some of you would be so kind?

Tris, not only do they not give the troops adequate equipment, not one has the decency to turn up at Brize Norton whenever a coffin returns home. Shame on them.

Vronsky thanks so much for the link. I know that verse has been used several times in ceremonies in recent years.

I completely agree with you Selma. We have no reason to be there other than to assist the US. Clarinda's comment about minerals could well be correct but I do know British troops were needed to ensure a major oil pipeline was installed and that happened a few months ago. Can't find the link, sorry.

Oh dear Vronsky, I'm very much a low life because I have criticised teachers in the past. Possibly because I am the produce of one and my upbringing wasn't easy.

I hope all of you have read the reasons why labour haven't yet kicked Brown into touch. The article which states he must stay until Ireland have their EU vote then it won't matter. Because Cameron has said he will have a referendum on the Lisbon Treaty Mandelson and is EU mates are petrified the tories get into power before Ireland's vote.

I sincerely hope they vote NO.

Thanks for that Niko. I have a few readers who live outside the UK and may be interested.

Thanks Superman's Nemesis for that repost from SOS.

and The software works fantastically.

The quality of image and sound is that of direct TV

FC, would you mind posting that on Scunnert's site please?

cont... it's not just oil and one of the largest gas reserves in the world Subrosa, but solid mineral reserves - gold, precious gems, rare elements, rare metals, radioactive elements, industrial elements and two particularly rare elements which make Afghanistan, under the US installed poodle-government, of the greatest industrial and commercial strategic importance. Why else would the heinous Dick Cheney be there?
It's like everything these days - where's the money? Russia was desperate to get their hands on Afghanistan to keep out the US but failed due to chaotic leadership. The US and sadly the UK got in to establish bases despite the no doubt calculated human losses (collateral damage?). It's nothing to do with whether Afghanistan is tribal or mountainous - if we can bribe the puppet government to become party to the mining that will inevitably be initiated but just guess who will get the better deal from the contracts. We in Scotland should know a little about that - Diomhair? The Chinese have got it covered in South America and Africa the US needs/wants what Afghanistan has in her deep bed-rock.

Hello Clarinda, your facts are spot on. I was talking to someone who has had connections with Afghanistan yesterday and they said the minerals were of prime importance.

I wish Diomhair could be broadcast on BBC1, but of course the BBC don't want that, because it would ensure everyone gets a chance to see how governments behave.

Let's not get into talking about Dick Cheney, even the very name riles me.