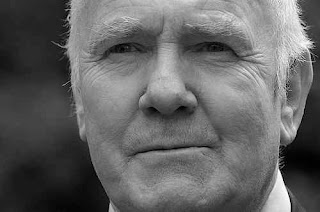 Some years ago now I spent a few months studying at Stirling University.  It was just beginning to develop a name for itself and was attracting students from around the world.
Only last week I was pleased to read they were going to offer Gregory Burke, the author of the anti-war play Black Watch, an honorary degree even though he had been banned from campus while he was studying there in the 1980s following an unprovoked attack on fellow student Mark Campbell.  Well deserved I thought and again regretted I had never managed to see his efforts but I heard lots about it from friends who were lucky enough to buy tickets.
This week's The Sunday Times reports that the university was preparing to withdraw the offer after the victim's brother Michael Campbell wrote to Christine Hallet, the principal, to register his family's "disgust".  Burke emailed the university to say he no longer wanted to accept the award to avoid causing further embarrassment.
Now the university has announced it is to honour John Reid who studied history at the university and was a former president of the student union, "in recognition of his outstanding contribution to public affairs".  Students and politicians condemned the proposal, given Reid's support for the Iraq war and its aftermath which has claimed the lives of 179 British troops. Kevin McVey, president of the university's Socialist Students Society, said students planned to demonstrate when Reid receives his honour from James Naughtie, at the graduation ceremony next month.
"What John Reid did as defence minister has brought dishonour to the university and they should not be honouring him," he said.  "He was the man who famously said that troops in Afghanisan wouldn't fire a shot and we have become increasingly embroiled in a war there."   Other people, including Rose Gentle whose son was killed in Iraq, are quoted as being very much against this accolade for John Reid.
A spokesman for Stirling University said, "Dr John Reid is a graduate of the university and has been a good friend to the university over the years.  He is being recognised for his contribution to politics in the UK."
Forgive me if I'm wrong but could 'good friend' mean ' good benefactor'?  How does having a fight with another student when you're young and daft compare with someone who, as defence minister, made decisions which have been instrumental in the deaths of 149 of our soldiers in Iraq and 154 in Afghanistan?
I certainly know who I would like to be honoured, do you?
Tweet
Posted by subrosa at 10:55

John Reid is an arrogant, ignorant, incompetent dick and one of the most unpleasant people I have ever met.

Wv is suciall and nothing to do with my blog.

Your blog is great and your latest post did make me laugh, honestly it did, well after the shock of the content it did :)

Naughtie honouring Reid? It's a small world. From 'Lobster':

Symons shares her unelected status with two other key figures in the new Blair administration, Jonathan Powell and Michael Barber. Powell, a former British diplomat in Washington, is now Blair's chief of staff at 10 Downing Street and Barber is special adviser to Education Secretary David Blunkett. And what do these two and the four ministers in the new government share with Ms Symons? They are all members of the British-American Project for the Successor Generation (BAP for short) - an elite transatlantic network launched in 1985 with $425,000 from a Philadelphia-based trust with a long record in the US of supporting right-wing causes.

Oh Vronsky, I do hope others read your comment.

And people say there are no conspiracies...

And John Reid was wait for it.........inThe Communist Party when he was a student a Stirling Uni!. Maybe his honpourary degree is for rank opportunism

I am kind of glad he is being honoured - I will give the Stirling students and the rest of us the chance to let him know what we think of him. More unpopular than were George W to have gotten a gong - at least he showed some consistency, principles, got elected on a right wing ticket, by rednecks. Reid stole votes, conned the good people of Motherwell and Wishaw

Aye, and Subrosa - Vronsky points out a real ,important conpiracy,. Doesn't imagine one to explain away a few racist anti English posts by a few fringe nats

I've related the story elsewhere about his boorish behaviour on the night sleeper from London to Glasgow - a really class act.

I agree "benefactor" nothing like vanity - my favourite sin!

And Vronsky's post - the name Paxman what a feckin surprise, another snake.

Ah brownlie, forgive me, I forgot he was on that train. Don't forget I'm older than you and therefore permitted a few more lapses of memory!

Sure as eggs are eggs CD he'll have been keeping his old uni sweet, just in case of emergencies you understand.