The Not So Righteous Mr Devine MP 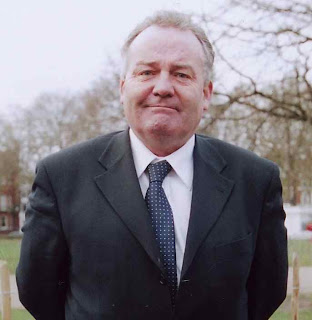 Jim Devine is MP who represents Livingstone.  In the four years since he became an MP, the former trade union official has claimed around £60,000 from the Additional Costs Allowance, which allows MPs to buy and refurbish a second home.
He claimed £2157 in 2007 for 'rewiring works' supplying an invoice in the name of Eastern Electrical Ltd of 76 Wilston House, Southark Bridge Road, London.
Paul Hutcheon of the Sunday Herald has done an excellent job investigating this claim and found there is no company of that name registered in the UK, there is no road of that name on London and there is no Wilston House in London.
As my reader, who brought this to my attention, says "This is not within the rules, it's straightforward fraud and this man should be jailed."  I concur.
Update:  Monty at The Universality of Cheese has a post regarding Eric Joyce, the first expenses millionaire and his claims. Certainly worth reading.
Why are MPs allowed to be elected when they don't live in their constituency.  How could Eric Joyce do a proper job?
Tweet
Posted by subrosa at 12:58

This man is a thief plain and simple. Surely now the people of Livingston will wake up and smell the coffee. Great Britain is a Great Big joke all around the world, even people in Panama are laughing at the Mother of Parliaments. It’s time to vote SNP and to vote “Yes” in the coming referendum. Westminster no longer has any moral authority to deny us our right.

I don't believe that this troughing, fraud, gangsterism and crookery is new. I don't believe that there was a golden age when politicians were honest and wished merely to serve. They have always been at the apex of a pyramid of corruption and venality - all that is new is our ability to report it, thanks to the internet.

The spectrum of criminality runs from Devine's imaginary electrical company at one end to a million slaughtered innocents in Iraq at the other. These people are moral cripples, and it is hateful to think that they will not only walk free, but will still live high on the hog amidst the chaos they inflict on others. I sometimes wish I believed in eternal damnation.

It's always the Union types who, in years gone by tyrannised the nation and held us to ransome, and now they can't do that anymore, they have decided to make sure they get revenge by milking us for everything they can.


eternal damnation is the nation state in thrall to the snp

Niko is hoping that the loyal Labour supporters will forget the sleaze in the same way as they forgave and forgot the slaughter of innocents in Iraq and still voted for Labour.

Wrinkled Weasel said...
"It's always the Union types who, in years gone by tyrannised the nation and held us to ransome, and now they can't do that anymore, they have decided to make sure they get revenge by milking us for everything they can."

It was "union" types that won decent wages, working conditions, and living standards for everyone - regardless if they were in a union or not. Often these wins were at great personal sacrifice and cost.

The people of the UK are being milked by professional politicians in the service of corporations and the entrenched privilege of the elite.

"The people of the UK are being milked by professional politicians in the service of corporations and the entrenched privilege of the elite."

...and perhaps we can add that the rank and file of the union membership have been right royally screwed by their senior management's cosy arrangements with New Labour grandees since the 1987 new order policy reform.
.

It's certainly time Scotland had independence WW, then we can set the agenda for the type of representative we want. I do hope it doesn't split up like the present Westminster setup and we do away with this whip business. That's a scourge.

Munguin, I do wish though that the SNp MEPs would publish their allowances/expenses before the EU elections because then they would be seen as an open and honest party.

In keeping their heads in the sand they're behaving like the Big Three in England and they don't have any credibility.

Vronsky I would agree but in days gone by we did have some who entered politics out of conviction rather than for financial gain. Of course we had those who wished to increase their image within the UK but that type of person will always exist.

I too wish I believed in eternal damnation but still these frauds and cheats sleep well in their beds at night. Something seriously wrong.

Our beds, Subrosa. We paid for most of them.
.

Yes indeed Tom. I read somewhere today that an MP bought extra beds a year after they bought the first beds for which they made a claim. Strange thing was the original beds were futons and yet the claimed the following year the futons had 'broken'. How can a futon break? It's just a large Japanese mattress which lies at floor level.

How can a futon break? The mind boggles.

Subrosa, I was chatting to Aileen McLeod who is number three on the SNP Euro list.

She was telling me that, if fortunate enough to be elected, she will not be taking any expenses in her role as an MEP. She has told the party this and they accept her stance.

As a first time campaigner, she is an innocent, but a smart cookie who knows the insides and outsides of European politics and is wholly worthy of your vote.

Monty, this is the kind of news that the SNP should insist the newspapers publish. It was unfortunate that Ian Hudghton had a 'bad' press with the Courier but he really ought to know better these days. He's not a council leader anymore and his electorate spreads so much wider.

I do hope the SNP try to make Aileen's comments hit the nationals.

Monty you're ahead of me. I'm watching TV (or partially) for the first time in ages and that's just what I asked your good self.

Seems like there's much more to come yet, I do hope that a criminal investigation is brought in against this corruption.

There is no need for people to be greed while their constituents starve and bask in poverty.

One would despair, begone Labour - you lying cheating scum, and a word of warning to the SNP and any others in Scotland who would partake in such greed -

I PREDICT A RIOT.

I would hope the SNP are taking that on board CD.

She was braw right enough, just a wee bitty nervous at the start then - pow.

Well Brownlie, I'll take your word for it. Personally I think he looks a bit puffed up - too much champagne perhaps?

Jim Devine is a crook, I can't believe he is trying to appeal his case (see my blog). He won't succeed.