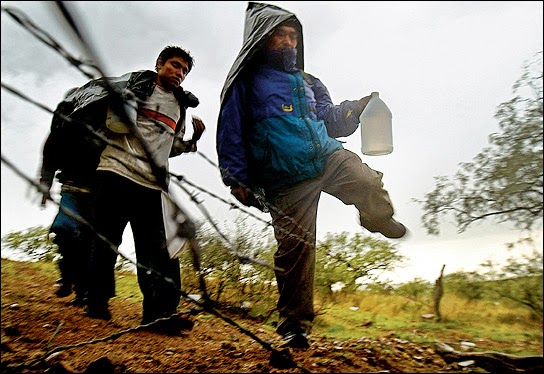 Yesterday Nicola Sturgeon announced the SNP’s general election manifesto.  Most of the media were negative including the Daily Mail’s headline ‘A Match Made in Hell’.

I’ve skimmed through the manifesto and thought many points were appropriate to Scotland but was so disappointed at the lack of detail concerning immigration.  Considering the late horrific tragedy which has taken place in Italian waters perhaps the SNP think Italy’s too distant to be of any concern to Scotland.

Last week I had an interesting conversation with a Syrian.  Let me say he instigated the issue of illegal immigrants. He was an illegal immigrant until 6 years ago having arrived in the UK back in 2004 by jumping a lorry in Calais.  After spending a couple of years in the south east he moved to Glasgow where he found work on the back market selling ‘stuff’ (he didn’t detail the ‘stuff’).  Once his application for asylum had been approved he found work with a charity which helps immigrants and enjoys the work to this day.

When we were chatting about the influx of immigrants, both legal and illegal, the UK has half-heartedly dealt with in the past few years, he mentioned how easy it is for anyone to enter the UK. ‘There’s a 75% chance that, if you know someone who has been granted asylum in the UK that you’ll get entry’.  He spoke for some time about this and said he was regularly contacted by fellow Syrians in the UK who asked him to say a certain person was a relative. ‘The immigration authorities will give the green light in most cases if the illegal immigrant can say they have family here.  In most cases the immigrant can’t even prove their nationality as they destroy their passport prior to entering’.

All this was an eye-opener to me.  How many people arrive in the UK by such means?  ‘Thousands,’ I was told, ‘I could be a rich man with the amount of money I’ve been offered to sponsor someone I don’t know but I’m not prepared to put my UK residency in jeopardy.’

Now we have the serious problem of these people arriving by boats from the African continent.  Yes we’re partly to blame for interfering with the political structure there but should we (I mean the Europeans) be responsible for each and every one who arrives on European soil?  I think not.  All of these people ‘fleeing’ have paid traffickers up to £10,000 for a space on a dilapidated boat just to reach Europe.  None is poor.  How many of us could find that amount of money?

Many people are calling for more help from the EU to avoid the tragedy of people drowning on the seas.  The Italians have done their best in recent years to cope with the numbers but now they’ve become so excessive they’re beyond controlling.

The EU are useless in this case.  What needs to happen is an arrangement by each EU country to implement the Australian principle. Yes, I know this is another Daily Mail article but other newspapers are ignoring the elephant in the room and that elephant is the traffickers. Their interest is money not lives.

First and foremost the traffickers must be stopped and the only way to do that is by the tried and tested system Australia has adopted. There’s plenty hot air spoken about tightening up our immigration rules but nothing has been done for years.

The reason for this post?  My Syrian acquaintance was very honest when he told me that Britain is known the world over for being an ‘easy touch’.  ‘I was housed within 3 days of arriving here as an illegal immigrant yet there are people, including soldiers, sleeping rough on the streets of Glasgow.  You don’t care for your own as much as those you do for those from other countries who come here for financial reasons and by that I don’t mean to better themselves by working - I mean to be given benefits which surpass their expectations.  If I had been working all my life here I’d be furious about how my taxes are spent, but then my job involves getting benefits for immigrants and it’s simpler than buying a pint in a Glasgow pub on a Saturday night’.

Here in Scotland immigration is currently not a problem, in fact immigrants have been welcomed. But if people continue to arrive in Europe in such volumes then more and more will move north when they arrive in the UK.  As my acquaintance said, ‘In another 20 years time Glasgow will be unrecognisable because of an uncontrolled immigration policy. There are thousands of immigrants like me who are making a very healthy living from declaring strangers are family.’

The African continent is a mess and the UK must take its fair share of responsibility as our actions were wrong when we decided to team up with France and assist in the toppling of Gaddafi. He was a tyrant but had an understanding of his country and others surrounding it. People trafficking was minimal when he was in power. Now hundreds are dying in an attempt to reach Europe and paying extortionate sums of money to crooks for the privilege.  Australia has greatly reduced the deaths at sea of those attempting to reach it and thereby reduced the horrific trade of people trafficking in Indonesia. Europe needs to resolve the current problem by having more stringent border controls.  More policing will cost more money but will save lives and also diminish the detestable trade of people trafficking.

Another fine and uncomfortable piece.

'. . .Who, nurtured in that fine tradition,
Predicted the result,
Guessed Love by nature suited to
The intricate ways of guilt,
That human ligaments could so
His southern gestures modify
And make it his mature ambition
To think no thought but ours,
To hunger, work illegally,
And be anonymous?'

Not only did we Eutopeans meddle in Africa by substituting 'our' borders for historic tribal territories; we also carved-up the Middle East with the infamous Sykes-Picot Agreement.

I actually read the SNP manifesto as you might have gathered from my own post the other day.

They make nice noises about controlled immigration but don't actually say how they will achieve it as far as I could see. I might have missed it but I don't think so.

Incidentally, if I was in Scotland I'd vote SNP. They do put their own country first as far as I can see and that's a lesson we should learn in England. Plus they got shafted with all those bullshit promises that the Westminster crowd made in the referendum which, as far as I can tell, just haven't materialised.

I've good friends in Scotland and love the country. In fact I'm up there in a few weeks time touring the Hebrides. I'm always interested in your viewpoint which is why I read you regularly...

But this is just the beginning, if history is any guide the curve will begin to rise and then rise some more and then become steeper and steeper.

BTW also did a parallel blog on the subject today and mentioned your post.

Thanks Edwin. The conversation I had with the youngish man gave me much food for thought, hence the post.

Joe, what would I do without your contributions? I’d forgotten about the Sykes/Picot agreement.

I enjoyed your post Dioclese. Just love how you go for the jugular at times. :D

Demetrius, haven’t some of us been saying that for years that we’ll be paying for Iraq etc for generations.

I’ve said many times that the future doesn’t look good for our familial successors.

Oh thanks Demetrius, that was very kind of you. As you’ll perhaps gather my conversation with the Syrian chap gave me much food for thought.

On 8th March 2014 some 239 people were lost when Malaysian Airlines flight MH370 went missing. Today, ships from several nations with specialist sonar will continue the search in the southern oceans. This has become a purely humanitarian exercise merely in order to bring peace, comfort and closure for the families of the lost.

On 24th March some 150 died when Germanwings flight GW9525 crashed into a French mountain. Today, forensic experts will continue the difficult task of identifying the many body parts recovered from the wreckage in order that those who died may be laid to rest with proper dignity and respect.

Since January 2015 some 1700 refugees have drowned making the perilous crossing of the Mediterranean. Yet all of Europe doesn’t bat an eyelid. Instead, its only united response is to curb the influx of refugees by proposed air-strikes on any vessel capable of carrying such refugees.

What is happening to us?

Eternal Father, strong to save,
Whose arm hath bound the restless wave,
Who bidd'st the mighty ocean deep
Its own appointed limits keep;
Oh, hear us when we cry to Thee,
For those in peril on the sea!

The Aussies ave taken a tough stance and rightly. Perhaps it is time for Europe to implement 'tough love'. All boats should be intercepted and returned to North Africa, no execeptions Indeed, most of the world is a shithole, so let us stop importing it here. Interestingly, these migrants often travel the length of Europe in order to enter the UK. These people are not refugees in any conventional sense, they are economic migrants out to exploit our generous social system. Frankly, it sickens me and I'm glad I fucked off to Nuzzyland. I consider myself as an Englishman in exile.