Something’s Missing In This Election Campaign 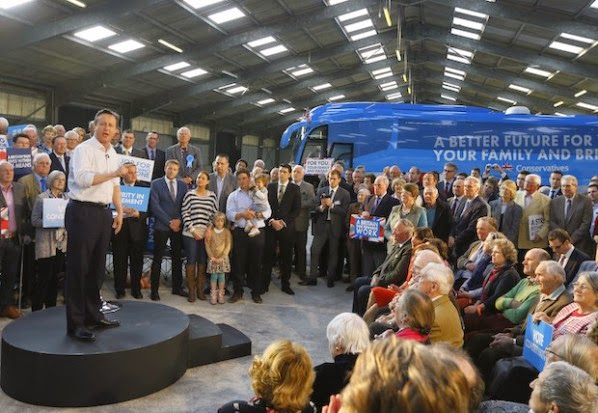 The campaigning of the ‘big three’ hasn’t exactly set the heather alight has it?

The American styled hustings have been a complete turn off for me. How can any politician be taken seriously when they so blatantly falsify major announcements. The photograph above was headlined ‘Cameron at election rally in Cornwall’. Looks impressive doesn’t it?  But fortunately one journalist, Niall Paterson from Sky News, decided the public shouldn’t be duped and published the reality of the ‘event’. 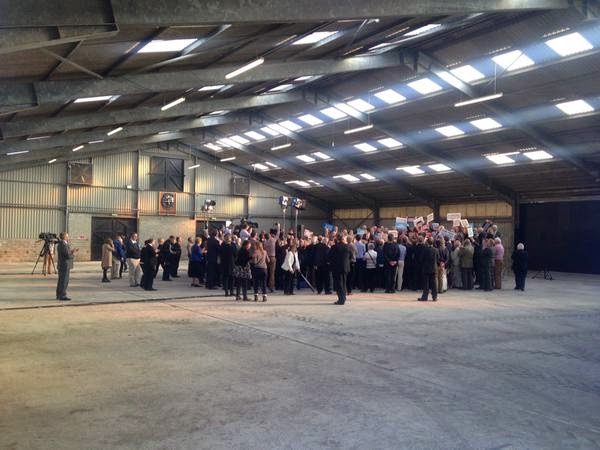 If the Tory leader can’t muster more than a handful of local supporters it doesn’t say much for the Tory party.

Ed Miliband continues to stumble from one disaster to the next.  It seems he’s rather fond of a particular lectern because it makes him feel ‘ministerial’.  This particular piece of equipment is being hauled round the country to assist Ed in his campaigning.  No event is spared the ‘lectern touch’, not even your own back garden it seems. 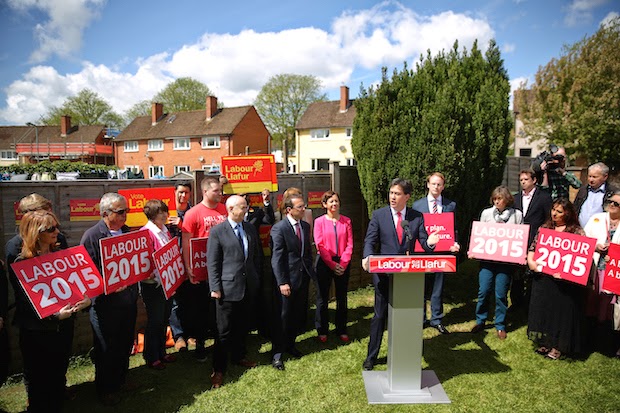 Even if I was a staunch Labour supporter I’d cringe at seeing my beloved leader looking so foolish.

However, there’s one subject which has hardly been mentioned during this campaign.  Climate change.  Is it not being mentioned because of the passing of the joint pledge in February?  Are they too afraid past errors will reflect on their decisions?  The NIPCC think it’s been grossly overstated but I’ve read nothing about their latest findings in the media.

Maybe our politicians think the science is settled. I think there’s a lot more proof required and I’m uncomfortable being forced to pay a tax on my utility bills.

Sometimes it’s the grass root voters who put sensible efforts into politics.  I was sent this link the other day.  It’s a neat piece of work made by a home furnishing business and obviously is aimed at English voters because there’s no mention of the SNP, but  I was asked to include it on the blog in order to encourage people to vote and I’m happy to oblige.

"If the Tory leader can’t muster more than a handful of local supporters it doesn’t say much for the Tory party."

C'mon Rosie. It was 9:49am on a Tuesday. Most of his supporters were probably at work.

Two helpful illustrative guides for parties representing the 3 countries of mainland UK are at the link below.

Be aware: contains expletives; but let's face it, most voters have slung those at the policies & errors made by parties other than those we support

[If our hostess considers the 2x images unsuitable for her blog, please delete this comment.]

Oh! Subrosa – just where do we start on this?

. . . . . Truth, honesty, openness, clearly defined policies and not mere hopes and aspirations, interviews that are not just sound bites strung together or the endless regurgitation of party dogma, etc, etc, etc

In all my three score years and more this election has been by far, the most puerile display by the main Westminster parties, with little or no mature debate merely childish name calling and wild promises casually thrown out to secure some degree of support.

How refreshing it would have been if this campaign had been based upon positive, honest, energetic and keenly fought politics rather than the negative, aggressive, vitriolic condemnation and criticism of any others with a differing viewpoint.
And the ad nauseam saturation coverage by the press, TV and other media has done little to improve the situation.

Like raging toothache we all long for this election and all that is associated with it, to be over.

" the most puerile display by the main Westminster parties"

To be fair to the SNP, they have tried to keep up with the obnoxious antics of Mhairi Black, Brendan O'Hara, Natalie McGarry, Neil, Tasmina Ahmed Sheikh, et al.

It has been a valiant effort by them all.

It is a pity that ABBA were never asked to form a government.

HI JRB,I think I am in total agreement with you.As Abraham Lincoln said,You can fool all the people some of the time, and some of the people all the time, but you cannot fool all the people all the time.
Having watched the Three Stooges (Westminster style ) this evening being questioned, I cannot believe any of them, and neither could most of the audience. Might explain the poll ratings.People have woken up, and are not best pleased at being suckered.

Hi William. Thank you for the list of SNP candidates,have looked at what they are supposed to have done,but I can see no wrong.Unless the crime is being SNP rather than part of the LIB/LAB/CON which was not popular with a lot of the audience of Messrs Cameron/Milliband/Clegg.Seems the English are not impressed by tonights Performance.

I think the 'politics in the home' people should stick to furniture!

What a load of rubbish! Arguably Churchill was seen as a wartime leader and that is why Attlee won the first post-war election, but this comment is made against Churchill when he won the next election.

Nobody decorated their houses because they couldn't see them in the blackouts - my recollection was they were in the daytime.

Blair introduced same-sex marriage, so what did Cameron do?

Having watched the BBC Question Time leaders’ debate, I have to ask – did I just witness the demise of both the Union and of democracy?

There is no longer a United Kingdom made up of England, Scotland, Wales and N. Ireland – merely Westminster and a few other places.

And the ‘new’ democracy is apparently only valid if one votes for either of the two main Westminster parties.

"Thank you for the list of SNP candidates,have looked at what they are supposed to have done,but I can see no wrong"

You don't have any issue with sectarian abuse, threats of violence and a candidate who regards all old people as suffering from dementia.

Perhaps these are normal standards for you.

Then again, you do view Russia as a bastion of freedom and democracy.

Hi William, never claimed to be "politically correct", if that's what you are inferring I should be.
My comment was repeating what the Russian observers of the referendum
said,I did not make the observation that you say I made. Never lived in Russia so I do not know.Are you politically correct? Or do we just not see things the same way.

That hilarious tbh . Quoting Russia. They are a beacon of democracy right enough . Why dont you ask the people of Ukraine what they think of Russian democracy.

A study conducted by Russkiy Reporter in the end of 2011 revealed a number of interesting facts on this front. First, the great majority of the Russian elites went to one of just two Universities. Second, none of those occupying the top 300 positions came from the Russian Far East. And, third, the most important factor influencing membership of this elite circle is to have known Mr Putin before he became president. In short, Russia is governed by a circle of friends. This is not a meritocratic system in any sense: most of these people have not had proper careers, but have simply ended in this ruling group.


Maybe thats what the SNP are transpiring to be .... 1 party state with complete power over everything. Thats not democracy .. thats dictatorship .

I noticed that too Fergus and brought it to the attention of the author.

Joe, you’re being kind there. Many of his supporters are retired. :D

Oh JRB I can’t help but agree but I do wish Ms Sturgeon had been a little quieter about wanting to get into bed with Ed Miliband. The thought of him leading the country appalls me.

It’s now a few days later from this post and I’ve an idea the tories and libdems will pair up again, needing the NI lot to help make up the numbers.

Will that be good for us? Who knows.

Thanks William. I can always count on you to leave a controversial comment. :D

Aye Demetrius, at least there would be decent harmonies.

Perhaps JimS but I thought it a reasonable effort to encourage folk to vote and it was made by an interior decorator and I posted it as a little light hearted humour.

Wasn’t it awful JRB? I was sorely tempted to switch off but stuck it out.