The Demise Of Scottish Labour? 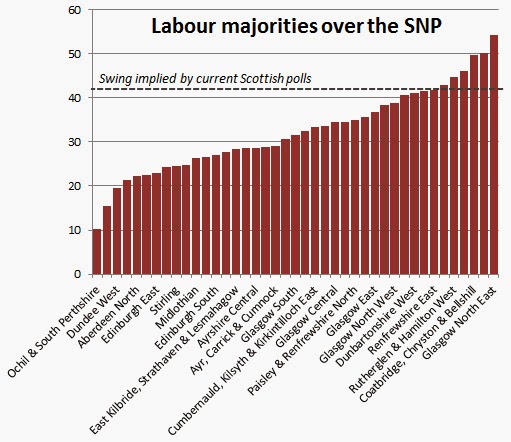 Above is a chart of all Labour’s seats in Scotland, by their majorities over the SNP.  The first thing you notice is how few traditional Labour V SNP marginals there are. Ochil and South Perthshire, with a Labour majority of 10% over the SNP, is the only seat that would be regarded as a realistic target under ordinary circumstances.

These are not ordinary circumstances.  The dotted line across the chart shows the Labour>SNP swing that has been suggested by the four Scottish opinion polls so far this year. As you can see it’s enough for the SNP to take the large majority of Labour’s Scottish seats.

Below is a graph showing the LibDem majorities over the SNP. 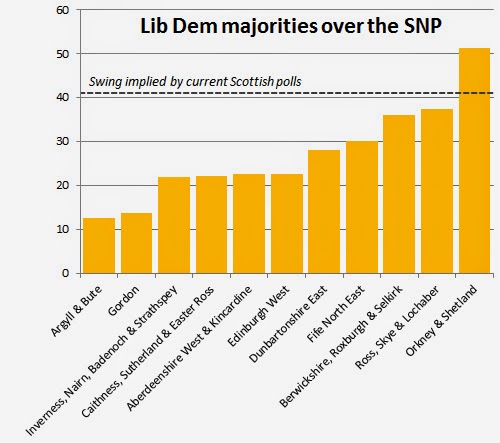 Lord Ashcroft has published a poll which concentrates on Labour held seats in those areas that voted Yes in the referendum, plus two high profile LibDem seats - both of which show the SNP ahead, returning Alex Salmond to Westminster in Gordon and ousting Danny Alexander).

The full details of Lord Ashcroft’s poll is available here.

I’ve never taken polls too seriously, but Lord Ashcroft’s has to be one of the most detailed.

How do Labour handle such news?  By resurrecting Gordon Brown!  No sniggering now, although I sniggered myself when I saw the headline ‘secret weapon’.

Scots can be fickle when deciding which party deserves their vote but I doubt if many - with the exception of the die hard Labourites - will listen to a word Mr Brown utters.  They will remember The Vow that wasn’t a vow at all within hours of the referendum result. Older voters will remember the complacency with which Labour has governed Scotland for 40 years.

Will May’s general election see the demise of Scottish Labour? I sincerely hope so.

Vote for monkeys or chimps, it is all the same, you will get peanuts.

Labour/SNP all the same, winging, small-minded, merchants of envy and discontent, reliant on a feckless, dependent electorate to keep the politicians in the trough they think they deserve. Living the life on benefits from 'free' oil, over-priced water and EU hand-outs.

Meanwhile, for anyone with talent, the lights of London etc. still burn bright.

Your Political Map will need updating.

Though not a Labour supporter, I find the demise of this once illustrious party with its proud political and social history, more than a little sad.

I firmly believe that there has always been in the Scottish character that element that goes beyond ‘self’ – be it socialism / the milk of human kindness / care and compassion for others – call it what you will, be it religious or secular.

Politically, one might argue that such consideration of others was represented by ‘Labour’; sadly since the advent of ‘New Labour’ and its successors that has no longer been the case.
Labour has abandoned its ‘socialist’ principles and roots in its lust for power. Now PPE graduates run for office with little or no experience of, or regard for, the life of the average working man or woman.

By all accounts and from the latest polls it would appear that the people of Scotland will very soon abandon Labour and find a home for their caring and compassionate nature elsewhere – and rightly so.

Anything which reduces the faux socialism pretending to be Labour gets my vote, Subrosa!

I am a Scot, born and reared in Glasgow though I have lived in England for the past 20 years. I have no experience of the SNP as a government though most of my family are still there and seem quite happy. It is well past time Scotland broke away from Labour, they treated Scotland as their own personal fiefdom and, at least in Glasgow, didn't do much as the electorate was taken for granted. Maybe some new party will rise from the ashes. As for Brown, I never could stand him.

It will Joe. Remind me in May please.

My father was a life long labour supporter JRB and I know he would be horrified at its state today.

I agree, it is rather sad; particularly when we know those responsible are our fellow men.

I don’t think it’s faux these days OR. The cat’s out of the bag!

Hi Carol42. You speak for a lot of west coast people. I’m a Dundonian and Dundee was also Labour controlled for decades, but now it’s SNP and things are moving more in the direction they should have been going 30 years ago.

Having got rid of Labour, what then?
If the Scots aren't careful they will end up with a one part state, which I certainly wouldn't want regardless of the party.
Well at least in England we are safe from that possibility (at the moment).

I dunno, Rosa. While it would be great never to have a Labour Government in England again, you chaps may care to recall the fable of 'King Log and King Stork.'
The S.N.P. is a deeply unpleasant party of nannying authoritarians. OTH, Scotland has form for this, remember the Covenanters?