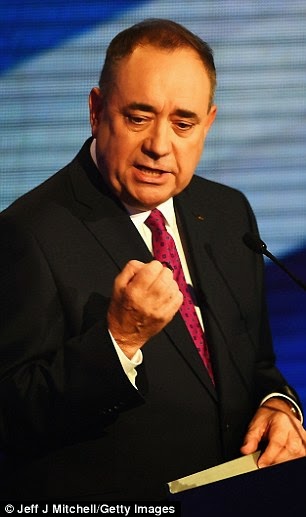 Nicola Sturgeon is now leader of the SNP. I’ve read in the media that she is more popular, within SNP circles, than Alex Salmond and this bodes well for the future. My MSP, John Swinney, is now Deputy First Minister.

It will come as no surprise to many of you that I like Alex Salmond and have great respect for the man, although I dislike some of the policies he has introduced during the SNP’s time in government.  He’s an astute politician, a superb orator as well as being a clever and intelligent person.  Not many politicians today carry all these attributes.

When he announced he was standing down as First Minister and leader of the SNP in September, my first thought was he must be retiring from the political scene.  Silly of me I know, but where would he go?  Then he gave the answer on Question Time; or rather gave the Dimbleby the hint.

There is a rumour floating round Scotland that he is considering standing in Inverness, Nairn, Badenoch and Strathspey for next May’s Westminster elections. Currently this seat is held by LibDem Danny Alexander who will be defending a large majority of 8,765.

An early rumour suggested he intended to stand in Gordon, where the LibDem Malcolm Bruce, who had a majority of 6,748 at the last general election, is standing down and Gordon covers the Aberdeenshire East constituency represented by him at Holyrood. However, the LibDem candidate for Gordon is a former journalist, Christine Jardine, who has no public profile and senior SNP members are rumoured to have stated ‘Alex wants a scalp. He won’t get that in Gordon and he has a pick of any seat’.

The SNP has not yet chosen its candidates for next May’s election.  Alex Salmond will, almost certainly, not contest his old Banff and Buchan seat as it’s already represented by the party’s Elidh Whiteford.

In Inverness, Nairn, Badenoch and Strathspey, Danny Alexander’s main challenge came from Labour in the 2010 general election.  But the Holyrood seat of Inverness and Nairn is represented by the SNP’s Fergus Ewing, who won in 2011 with a massive majority of nearly 10,000 and SNP strategists believe they can therefore challenge Danny Alexander next May.

The LibDems are relying upon the result of the Independence Referendum, when around 60% of voters voted No, to keep Alex Salmond from gaining a seat from them. Some of the quotes around: ‘He’s something of a spent force’. ‘People used to see him as invincible but that’s not the case now’.

So now we’re entering the general election campaign. David Cameron insists the austerity measures must continue. Not good news for the less financially secure in our society.  We can but hope that the weather continues to be mild and thus heating bills are kept low enough to avoid many falling into debt.

I read somewhere that some Labour voters are going to vote Liberal even though they loathe Danny Alexander for being Osborne's boy and want him out. They will do anything rather than allow Alex Salmond to win.

As Alex Salmond's a left of centre politician and Danny Alexander is a right of centre Liberal, it shows where Labour's politics are.

For many in the Inverness area Mr Alexander has been, at best, a source of major disappointment. However, no mater what we may think of him, he is slowly learning the trade of being a politician.

Recently, appearances by Mr Alexander at local events, farmers markets and the like have been on the increase. Normally sightings of the ‘Red Headed Alexander’ in and around the Highland capital are as rare as sightings of a ‘Capercaillie’ or of 'Nessie' herself.

It has also been noticeable of late that Inverness city has found itself in-line for several major financial investments from the UK government and other sources. Unsurprisingly, Mr Alexander seems to feature heavily in all such ‘good news’ stories.

All of which adds some cheer and comfort to the local Lib-Dems and I would suspect that if Mr Salmond should come, welcome as he might be, he would face a tough fight for the seat – and let us not forget the SNP came a very poor third at the last general election, they will have quite a mountain to climb.

Much as though we would be delighted to have Mr Salmond, it might be a safer bet for him to stand elsewhere.

I think the Labour party will be struggling in ALL Scottish seats to find any voters at all willing to vote Labour, never mind transferring their votes to the Lib Dems.
It might be a seat the Greens would do well in, as is Caithness, Sutherland and Easter Ross, where Viscount (John)Thurso has managed to hang onto his seat in the House of Lords, just in case we, his electorate, suddenly realise that his only role in life is to claim as many expenses as he can as our MP, and not to represent the views of his electorate.

"Alex Salmond has dismissed reports that he could stand against UK government minister Danny Alexander in the general election next May.
Mr Salmond told BBC Scotland that if he was to stand it would be in the North East rather than Mr Alexander's Inverness constituency."

Perhaps another Wolf Of Badenoch? My view about the May 2015 is that all bets are off and it could be a shambles. So his decision my turn on the best way to avoid the worst of this.

Very interesting Tris. I wish these London/Scottish Labour voters a’ the best.

I don’t read your local press JRB but I can imagine what’s going on. In fact I read something yesterday about Inverness Castle going to be made accessible to the public.

Back in the 50s it was. My parents and myself climbed the tower and my father was immediately ill with dizziness. He was violently sick on the way down. That’s when I learned about vertigo but I didn’t realise it until I was around 30 because my problem isn’t so severe.

I’m sure my Dad, having served in WW11, knew he had a problem with heights but he wanted to show his children the view and perhaps conquer it.

From your comment it would seem Gordon would be the best bet, although so many think any seat is his; a statement I refute.

I doubt if I can disagree with you HV. (Didn’t realise Thurso was still there. Thought he’d given up at the last election for some reason).

Ah, so the north east it is then. Thanks for the information JRB. :D

It will be interesting Demetrius - for a change. The UKIP rise south of the border and the Labour fall here may throw up some unusual results.

Just an observation - while the no vote in all the areas are divided three ways the yes support isn't!

No, John Thurso is still here, sucking up the expenses, like many another Lib Dem in the Highlands. It's another of those Scottish seats with incomers from the SE of England and other incomer landowners too embarrassed to vote Tory, since they became embarrassingly unacceptable in Scotland. The Lib Dems are their soft option, like Skye, Inverness and Orkney.
There are many "feudal" voters still in Scotland who want to maintain the status quo their grandparents voted for over the generations. Hopefully we can find the appropriate candidates for these seats, who will meet their ideological needs, but still support independence.

Quite a few of these 'sitting' MPs have personal following who will vote for them irrespective of the current polls so the SNP would be well advised not to count their chickens in view of the old saying about turkeys and Christmas.