Labour In Scotland To Reinvent Itself - Again 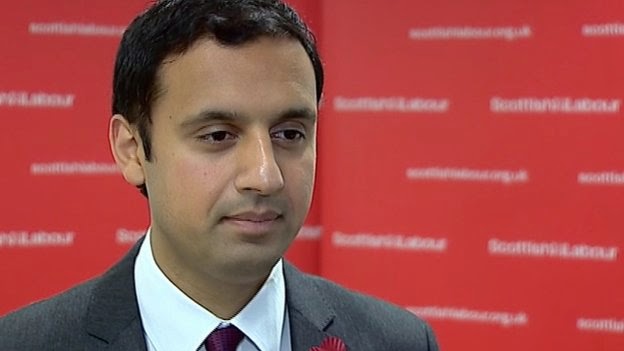 Since last week Labour in Scotland has been without a leader.  Did you notice?  No?  Neither did I.

To be fair to Johann Lamont she accepted a poisoned chalice but it was her intense hatred of the SNP - visibly palpable at First Minister’s Questions - which didn’t permit her to be anything other than a Labour Westminster stooge.

She managed to finger her (dis)associates in London on her way out of the door but methinks her criticism will be a nine day wonder.

Who is left now?  Most of you will have read the Sunday papers by now so will be up to date with the suggested candidates.  I’ve placed a poll in the right hand column is case you wish to place your own bet. No prizes available but the satisfaction of knowing that whoever wins will continue to be under the Westminster cosh. I have not included Gordon Brown as he has apparently ruled himself out. A few speeches in the last days of the Referendum campaign has left him totally exhausted I’m informed.

It’s with some reluctance I made Sarwar the image on this post. My dislike of this career politician knows no bounds.  Since he became deputy to Johann Lamont three years ago I’ve had to restrain from throwing something at my television countless times.  Never have I heard such automated nonsense from a Scottish politician and that speaks volumes.  But the man will very possibly go farther.  He reiterates the same drivel day in day out in the media and some of it will be believed by his party faithful I suspect.

It would appear Labour in Scotland will have a new leader by the 13 December. Yesterday I read that each MP’s vote is worth 100 times that of a grass roots party member.  That’s about par for the level of democracy wielded by London Labour.

Labour to reinvent itself; really?

How can you reinvent a dead horse?

I know Jim Murphy might have some dark powers but the corpse is more than dead, it is corrupt and decayed.

I fear for the Scottish Labour Party - for what we are witnessing is not just a little local leadership stooshie but a grand stramash that could shake the very roots of the Labour movement in Scotland.

Now Labour central office is showing indecent hast to have this entire problem seemingly done and dusted by 13th December.
But until the Labour Party addresses the complaints and fundamental criticisms raised by Lamont, McLeish, McConnell and other officials, the problems that beset Labour in Scotland will not be settled.

Lamont, McLeish, McConnell are part of the problem of the Labour Party in Scotland.

Questions have long needed to be asked about the level of candidates that rises to the top of the Scottish Labour Party - Lamont, McLeish and McConnell being three prime examples. The fact that a genuine heavyweight like Gordon Brown again rules himself out tells you everything.

Until the Scottish Labour Party rids itself of the corruption and sectarianism that it has become riddled with over the last 30 years, it will continue to be run by pygmies. The best candidates will continue to go south.

It’s the words of the man in the photo Panda, not mine (with the exception of ‘again’).

The roots were shaken a few years ago JRB, but because not all the apples fell from the tree, it was ignored.

If (emphasis) the media report the dinner without bias then it will be interesting. We’d get a much more accurate review of it from one of the waiters or waitresses.

William, we don’t often agree but you’re spot on. Labour has refused to acknowledge the SNP’s gradual move to the left in the past 20 years and this is the result. Their problem not the SNP’s.

Just because Brown said he did not want the position does not mean to say that he does not?

It's payback time for treating Scotland as voting fodder.

I did hear that Sarwar was ruling himself out and was urging Gordon to stand.

I wouldn't write Brown off just yet. He hates Miliband with a passion - and that might be just enough to 'persuade' him to reconsider. Notice the parentheses - I think he's very intending to run.

If he does, then he'll make history by getting elected three times to a senior political post without an election. Unopposed Labour leader, unelected PM and now unopposed Scottish Labour Leader? You couldn't make it up..

Mind you, the SNP just did the same trick with Sturgeon didn't they? Elections? Pah! They just get in the way of democracy.

Your poll on the next Labour Branch leader has missing choices

'It doesn't matter'
'Whoever Ed says it is'
'My neighbour's cat'
'Tub of lard'
'The winner of "One potato, two potato"
'Eddie Izzard'
'Ruth Davidson'
'An Irn Bru crate'
'All of the above'

Until the Scottish Labour Party rids itself of the corruption and sectarianism that it has become riddled with over the last 30 years, it will continue to be run by pygmies. The best candidates will continue to go south.


William-It will ALWAYS be run by pygmies! Cos thats the only type of candidate which will be acceptable to london leadership-a person who is absolutely bereft of looks, charisma, intellect or personality, is the type of person who will, in a robotic fashion, meekly accept londons wishes in any issue which arises.

Well, I didn’t have to wait till Friday morning to read of Labour’s woes…

• Miliband booed and heckled as he enters the Dinner in Glasgow, the very heartland of Labour Scotland
• A just published Ipsos Mori poll shows a dramatic fall in support for Labour, this is further confirmed by new poll from YouGov showing similar Labour fall. Will be lucky to keep ten seats in Scotland
• Anas Sarwar gives up and throws in the towel

The Scottish Labour Party’s future just gets bleaker and bleaker.

Gordon Brown and Robin Cook are two such examples of heavyweights who kept themselves at arms length from the Scottish Labour Party.

Thanks William- am curious to know why you consider the north british nose picker a "heavyweight?"

I agree though, he is hugely overweight, just looking at him!
Eughh!!