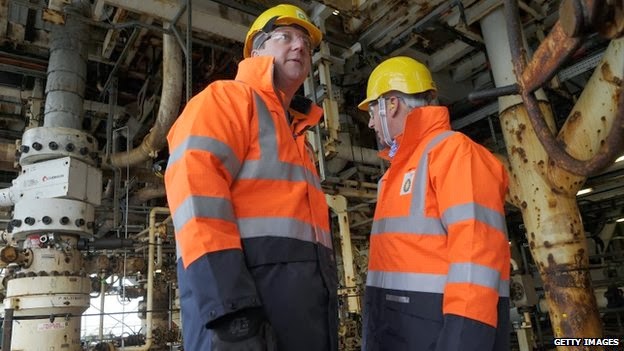 It was a funny old day yesterday in the north east of Scotland.  While David Cameron, looking extremely uncomfortable during a visit to a North Sea oil installation, posed for his obligatory photography prior to the UK Cabinet meeting in the granite city, Alex Salmond and his cabinet colleagues met just a few miles down the A90 in Portlethen. 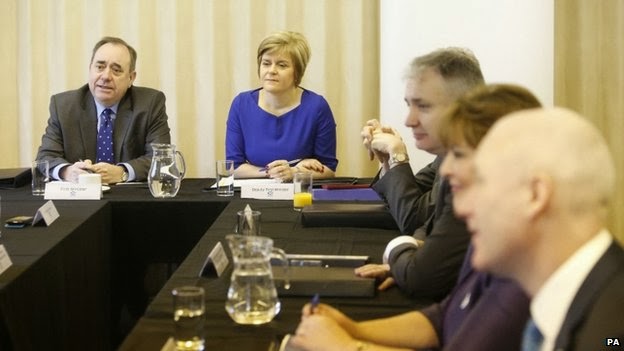 The meetings of the ‘great and good’ were all about oil, hence the rush to the oil capital of Europe.  Strangely, for the past decade or so, UK politicians have been constantly reminding us beleaguered Scots that the oil is running out so fast there would be nothing left by 2020, yet with only seven years to go, yesterday David Cameron insisted the UK government is best placed to manage our oil and gas industries.

Of course the UK government wants to hang on to the union’s greatest asset, who wouldn’t?  Yesterday Cameron pledged a ‘revolution in North Sea oil and gas extraction worth up to £200 billion over two decades, but this will only be affordable if the union stays together.’  Ouch!  Telling us Scots that we can’t manage our own oil and gas industries wasn’t a smart move. It was a bit late in the day for Ed Davey, the UK energy secretary, to announce ‘... a world first: making sure that we can capture the carbon emissions from gas plants in Peterheid in Aberdeenshire and those carbon emissions will be stored safely and securely under the North Sea.’ On radio Alex Salmond stated, ‘We can dae that tae nae bother’ - deflating Mr Davey’s grand gesture with his few simple words.

More and more I wonder if David Cameron silently supports independence.  It would solve some difficulties for the Uk government, not least the disappearance of 50 Scottish MPs.  The Barnet consequential would also, as if by magic, no longer be a thorn in the sides of middle England.  His Hug-A-Jock visit yesterday did little to endear the undecideds.

If there was a winner in yesterday’s Battle of the Cabinets, Alex Salmond and his henchmen and women won hands down. I’m sure there was a collective sigh of relief when David Cameron and his cohorts crossed the border later and it could be that some then realised why the last UK Tory cabinet meeting in Scotland was in 1921.

However, not all was rosy in Alex Salmond’s world yesterday.  Chris Deerin wrote a scathing piece in the Mail about Scotland’s ‘self-preserving politicians who choose the easy option and status quo, rather than the hard graft, confrontation and unpopularity that comes with real leadership’.  He asks where is our outrage. I’d like to assure him that not all Scots are happy with the dictatorial manner in which the Scottish government is pushing through bad legislation and paying no heed to public opinion. I have no doubt whatsoever that the SNP will pay for their behaviour at the ballot box though.
Tweet
Posted by subrosa at 09:31

I would trust Cameron over Salmond when it comes to affordability. Salmond is a man without scruples who will say or do anything to get what he wants. He will tell Scots that everything is affordable, we won't have to pay any more tax and, guess what, we'll all pay £600 richer. The conga starts here!

I think I'd trust the oil and gas industry with the governments that have successfully developed those industries rather than the Scottish equivalent of Robert Mugabe.

With the affiliation of Westminster MPs from north of the border:-
Labour Party 41
Liberal Democrats 11
Scottish National Party 6
Conservative Party 1

"Of course the UK government wants to hang on to the union’s greatest asset, who wouldn’t?"
I remember when North Sea oil was first discovered and the immediate result was that the value of the pound went down. This was explained by an economist at the time by saying that a nation's wealth was essentially fixed so the value of the pound 'had' to go down to maintain the 'value' of UK. That makes oil a bit of a poisoned chalice doesn't it? I'm afraid it just confirmed my opinion that the City of London and the Senior Civil Service are the UK's worst enemies.
Is oil a sterling asset anyway if it is traded in dollars?
Clearly this oil has magical properties as not only can its value be spent to fund current expenditure on health care and education but it can also be set aside to invest in a sovereign wealth fund too, (always assuming that a successful, 'ethical', non-capitalist investment can be found)!

The munificent 7 ; flew up in Scareforce One - they came, they saw, they wondered - why all the fuss over a bleak peripheral wasteland when they could be comfortable in the cusp of Westminster?

Beads dispensed, the maybes of hyperbole uttered they returned to civilisation. And none, not one, bought a pair of tartan trews.

Me thinks something must be afoot …

In September 1921 Lloyd George, holidaying in the Highlands, called the cabinet to a meeting in Inverness to discuss the Irish crises.


Regarding North Sea Oil … remind me …

Who was it back in the 80’s when the oilfields were being developed insisted that a state-owned oil company, like the Norwegian Statoil, would never work; that the only way was if the oil and gas assets were in the hands of private enterprise?
Oh yes - it was Mrs Thatcher and her conservative government.

Who was it back in 2011 who realised that the tax receipts from the oil companies was not bringing in as much as hoped, so imposed £2bn tax-grab that would hopefully aid the dwindling coffers.
Oh yes - it was Chancellor Osborne and the conservative government.

And Mr Cameron would now have us believe that a Tory UK government is best placed to manage our oil and gas industries… Aye right!

And as a wee post script – it is worth reminding ourselves that that frowned upon plan of the Norwegians has made them one of the wealthiest of nations … we could have, and should have, been in a similar financial situation.

Even if the whole of the UK North Sea sector output was credited to Scotland it would only amount to a fifth of that of Norway, with a similar population to Scotland.
What was left of the revenue would have been frittered away on buying votes but there wouldn't have been any revenue anyway as 'ScotOil' would have priced itself out of the market as it would have adopted coal mining practices such as shift time starting and ending at Aberdeen, plus allowances for cleaning up.

There is science. Put the ball up, and it will inevitably fall.

And then there is economics, in the hands of bandits - which is no science at all.

As for the pound - it`s just a mechanism for the exchange of goods and services. That could be done in a million or more different ways.

Mmm William, so Cameron is honest and a pillar of virtue?

That surprises me too Joe. Bad move from the Tories.

Antisthenes, if my memory serves me decently, there is gas in the central belt up here.

I have no knowledge of the oil industry Jim, but don’t these practices already happen?