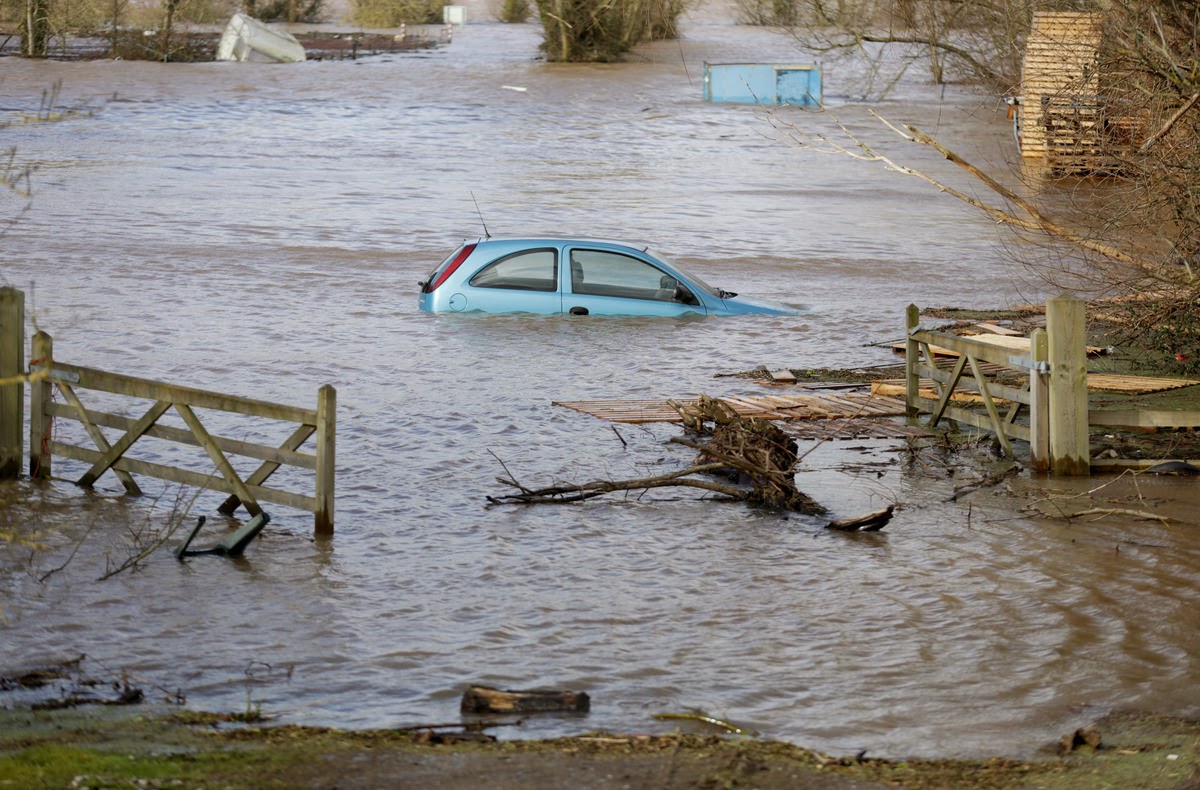 The above is a photograph of Burrowbridge in Somerset this week.

From the early 60s to the late 80s my parents could see the village of Burrowbridge from their living room window.  They lived little more than a mile away and my father walked the dog regularly along the River Parrett, which runs through Burrowbridge.

Dad had done his homework before he built their house and ensured it was built on a hill - not a hill as we mean in Scotland, but more of an incline. Every winter the Parrett would overflow its banks and the road would be flooded but seldom closed.  The local farmers saw to that and, along with the pumping system which had been in place for generations, life continued happily while their friends back in Scotland usually battled snow and ice.

How things have changed. In less than 30 years the influential left-wing of UK government, in cahoots with the EU, decided butterflies and voles are more important than people.

What has the EU to do with the maintenance of our waterways?  Everything.  How I wish the people of these islands would realise the EU has control over any government, be it Westminster or Edinburgh.  David Cameron and Alex Salmond bend over backwards to ensure every EU directive is implemented.

I suspect the Somerset Levels qualified as no 11 in the EU Directive 2007/60/EC ‘Flood risks in certain areas within the Community could be considered not to be significant, for example in thinly populated or unpopulated areas’. Until the mid 90s, when many from the south east started to buy up west country homes as holiday homes, the counties of the south west were more or less ignored by London.  A little changed in the 90s (can’t afford to upset those wealthy enough to buy luxury holiday homes can we?) but not much.  The locals kept feet on the ground.

Speaking of ground, the soil on the levels is solid clay.  Even in dry heat of summer, it’s nearly impossible to dig to produce a garden of sorts.  Every alternate year my father had tons of top soil delivered because he was intent upon growing his beloved delphiniums and gladioli, but it was hard work.  The clay was unforgiving and refused to mix and the top soil was usually just spread over the flower beds.

The clay is the main reason why the water on the Levels refuses to be absorbed by the ground and the lack of trees also hinders the process.

David Cameron, glib with soundbites as ever, insists there will be adequate money available for the flooding problem. although he refuses to acknowledge the problem is the cause of political decisions.  Now that the south east is also involved, I suspect the majority of any finance will be spent there and the people of the Levels will be left, not high and dry, but low and wet.

There is talk about reinstating the pumping stations of old and dredging the rivers, but over 12 months ago heard the same utterings. Nothing was done.

I’ve read some ‘greenies’ think the Levels should be left to revert to their ‘natural state’ before the Romans decided to reclaim the land for agriculture.  Sometimes I despair at the stupidity of these people.  The whole of the Fens was a bog, yet successive governments have ensured the area now is one of the UK’s most productive in terms of produce.

The flooding in the west country could have been easily avoided if politicians had listened to those ‘in the know’.  By that I don’t mean the Environment Agency, but the local people who, for generations, have dealt with the land.  Party leaders, welly-claded and murmuring platitudes, could be viewed as amusing, but the matter is far too serious.

Will the present flood situation be the catalyst for a nationwide protest against our membership of the EU?  All I can do is hope.
Tweet
Posted by subrosa at 09:39

You can call me an old cynic,

but I cannot help but notice that …

The poor people of the Somerset Levels and surrounding area have endured this current flooding since approximately Christmas. Oh, there have been sympathetic murmurings from Westminster, but all in all they have pretty well been left in the hands of a few agencies and whatever volunteers are available.
After all it is but mainly rural land with a dispersed population and not too many voters to worry about.

However the scene has now changed to the Thames Valley - the Home Counties - Tory heartland.
Disaster to end disasters; these are real voters!
Suddenly within a mere 48hrs, we have the Prime Minister cancelling foreign trips, buying new wellies, visiting effected areas, holding press conferences and promising ‘as much cash as it takes’.

Anyone might think he didn’t want to upset his core voters when there is an election looming in twelve months time.

(Oh, we seem to have forgotten the south-west in all this – Oh well, they’ll get over it)

JRB's hatred of all things Tory blinds him to the fact that all of Somerset's MPs are from coalition parties.
The concern over the Thames Valley probably owes more to the London-centric political/media bubble and very little to the colour of the current government.
It is a fact little appreciated by Scot Nats that none of the parties sitting in Westminster have much interest in what goes on beyond 25 miles from London and we probably have our national media to blame for that as it is them that determine what constitutes the 'national' debate.

Our not-fit-for-purpose Met Office must also shoulder some of the blame.

"SUMMARY - PRECIPITATION:
Confidence in the forecast for precipitation across the UK over the next three months is relatively low. For the December-January-February period as a whole there is a slight signal for below-average precipitation.
The probability that UK precipitation for December-January-February will fall into the driest of our five categories is around 25% and the probability that it will fall into the wettest category is around 15% (the 1981-2010 probability for each of these categories is 20%). [My bold]

The pragmatic solution, in a regularly-flooded area.

They won’t get over this for many years JRB. So much damage has been done and everything the locals did to try to prevent it was stymied.

I wonder how much how the money will divide? Probably 90% to the home counties.

I know that JimS and the same politicians have been useless in recent years. Many have stopped voting because they did nothing when the tried and tested systems were removed.

Thank you for that Joe.

That’s what some have done to an extent Joe, but unfortunately their walls are breaching.

It’s all down to the demise of dredging and pumping stations.

Check out theEUReferendum.com website where they have been discussing the flooding for some time. There is evidence that the Government has been following an EU directive - allowing land to return to its natural state for the sake of biodiversity. So this is much worse than simple `neglect` and all political parties are implicated because it is a policy that has been driven for years.

So. Lets see what the old commy shagbag Merkel will do whe the land around the Reichstag "reverts to its "natural state.""

Yes Alice, I follow Richard. Just wanted to express my own experience of the place. The Romans drained it and it’s been manageable for centuries.

The EU Greenies at it again. We’ll be living in caves shortly.

Furor, I never thought of that! Of course she’ll not be implementing the directive will she?