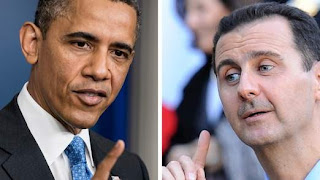 As I said a couple of weeks ago I intended to return to blogging but on a reduced scale. Since then my friend who was waiting for an appointment with the breast clinic has had her operation and the surgeon was unable to give her good news.  The next part of the 'process' is 5-day radiotherapy for several weeks and because her family live many miles away, another close friend of hers and myself have offered to help her husband with the hospital attendances which vary from an hour and a half to four hours so far.

Two days before her operation she became a grandmother for the first time and she has been unable to see her beautiful new grandson because she is too ill at present. Every day she sees him on Skype though - another blessing for the internet.

Now to the point of this post. I was furious to hear on the news last night that senior MPs have been pressing David Cameron to hold another vote on invention into Syria if definitive evidence merges linking the Assad regime to the chemical weapons attack.

Sir Malcolm Rifkind led the calls for options to be kept open and of course Paddy Ashdown was close behind.  Last week he stated, in his rounds of the media studios, that : "I've never felt so depressed or ashamed".  I'm sure many of us can remember at least one occasion when he ought to have felt worse.

The PR from the US has been abysmal with Kerry insisting the US has evidence that sarin was used in the attack. Obviously the US has little regard for UN inspectors as he stated his evidence comes from other sources.  Haven't we been down this road before not so long ago?

Critics insist that David Cameron's position is on a shoogly peg but, if he sticks to his promise of respecting last Thursday's vote, then he should be commended rather than pilloried.

The crucial question is: Was it Assad or the 'rebel' forces who used the sarin? That will be more or less impossible to answer and with so many factions - each with their own motive - is it right that we go to war again?  I think not. The consequences would be disastrous for the UK.

It's so easy to make the case on moral grounds but far more difficult to find an intervention that will make things better rather than worse.

The best development, at this point, would be for the Russians to reduce support for Assad and join the effort to find a way to begin to reduce the violence. A diplomatic, political solution is the way forward towards peace.

Let's not forget Vince Cable's department has been found to have permitted companies to sell chemicals, capable of being used to produce nerve gas, to Syria. The government has yet to produce details of any sale.

So, you didn't get the memo then?

Welcome to New Democracy for the 21st century: if at first the vote goes the wrong way, vote, and vote again until you get what you want.

I would like to see action against Assad, but I fear that if he is deposed, the situation will get worse with Al-Quaeda taking over. In any case, I can't see what good will be done by firing a hundred or so missiles at Syria, they will just cause more deaths and even release more poison gas from the arms dumps.
There is also the risk of revenge, how difficult would it be for a Syrian suicide terrorist to get into this country and release some Sarin on, say, the underground?

MPs should only vote again when the government has addressed these issues and has a real plan of action, both for the short and longer term, not just ideas like "we've got to do something".

What we need is a small western country to take over the administration of all these countries. These administrators would do deals with the local factions, trading one off against the other. In the meantime they would form a locally-recruited civil service shaped in their image.
A small military presence would be required on the ground but it would recruit from the local factions, forming a disciplined army in the image of the organisers.
It would help if the nominal leader of this western nation could be feudal in origin, rather than 'elected' by a political process as the feudal process intrinsically appeals to societies which often have their roots in tribalism rather than nationhood.
It certainly seems a more natural approach than that of the Marxist one of smashing up and overturning everything that works with the hope(?) that a better new order will form from the debris.

Firstly, welcome back to the blogosphere, your short ‘rest’ was missed by many.
Like you, my summer sojourn lasted, pleasantly, longer than I had expected, but now it’s back to auld claes and purrich.

On news of your friend, all that I can offer is that everyone should remain positive. The power if positive thinking can work wonders.


On the topic of the day –
How foolish I was to think that when the parliamentary vote came through the other evening, defeating Cameron’s proposals, that that would be an end to it all.

Now, as CR rightly says MPs are being urged to vote again till the ‘hawks’ win the day.

However the stance adopted by the US and its supporters in Westminster raises a number of unanswered questions.

- Claims have been made that gas attacks have occurred on several previous occasions, so why the righteous indignation now?
- Is this ‘moral’ stance merely to protect Obama’s inappropriate choice of phrase when he talked of ‘red lines not being crossed’?
- If the US has ‘intelligence’ of a war crime(s) committed. Why has this not been previously revealed to the UN, International Court of Justice or to her allies like the UK. Why is it only sharing it now, solely with the purpose of achieving its military objective?
- And on a military basis. Why intimate what you are going to do? Assad will have by now moved all chemical and WMDs to a safe and secure location. So any military strike will achieve nothing, it will be merely a brutal vindictive exercise to save face for a few western politicians.

Where is there evidence of the hand of a civilised democracy in any of this affair?

Call me an old cynic but …

Having spent the morning reading the papers and watching the news channels, in which Cameron, Osborne et al confirm there will be no further vote on the mater, I am left more than a little curious.

Cameron and his cabinet were humiliated last week, they were left looking inept and ineffective’ so why are they so ready to lie down and accept the universal derision that will fall upon them?
And why is Obama seemingly willing to take a similar risk?

I cannot help but feel that behind all this lies some hidden agenda.

After the "peace" that western intervention has bestowed on Iraq and Afghanistan, one realises our leaders repeatedly fail to learn from the history they created.

Sunnis and Shiites rarely live together in enduring peace, so why use our troops as Piggy-in-the-Middle, targets for all factions?

Syria isn't a 'democratic' civil war, it's a religious civil war, about which UK, US or UN troops can do sweet FA.

"Let's not forget Vince Cable's department has been found to have permitted companies to sell chemicals, capable of being used to produce nerve gas, to Syria."

Mix Harpic with Domestos & you get that WW1 poison gas!

.......and the EU was formed to prevent war in Europe.
But it doesn't seem to have stopped the EU governments from starting or enlarging war all over the world.
About a year ago an Islamist official said that the USA was the main terrorist country, just looking back over the last 40 years he does seem to have a point. Obama seemed to lose interest when parliament told Cameron..NO. Why did he need UK so much? Some one else to take the Flack?

A very interesting view Jim and one that I will ponder. Thanks.

Thank you JRB and I assure you we're all being very positive here. A day like today helps too when the weather is so pleasant.

I was foolish too - for a few hours, until I read the papers.

Excellent points. As I've said many times, I can never understand why Westminster and the US give such detail of any military intervention. It astounds me how foolish it is.

I think, for all Kerry's posturing and verbal propaganda, perhaps they're not so sure the chemical attack was from Assad. Of course we'll never know the truth.

Exactly Joe. We should keep well out of it.

Ah Joe, but do the supermarkets need a DoT licence for it.

You've concerned me now though. I have had both in my cleaning cupboard in the past.

Nor does it stop that stupid woman organising an EU military force Apogee.

There's something deeper than that going on with Obama don't you think?