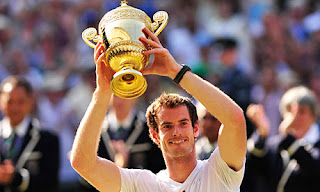 What can I say other than I'm writing this at 11pm because I've been celebrating with friends and doubt I'll manage to post early in the morning so I'll delay publishing until then.

Don't let anyone forget that, after Andy was 14 years old, no taxpayers' money was used to help him achieve this pinnacle of excellence.

I don't know what the taxpayers comment is meant to mean. Andy Murray's life is an anomaly and nothing meaningful can be extrapolated from it.

It means exactly what it says William.

Prefer football do you?

Is that what it means?

If I was an eon younger could be sufficiently inspired to pick up a bat and have a go myself. :)

As far as I understand William, there was little government funding for tennis when Andy was young and what money the LTA had wasn't spent on encouraging those with promise. Hence his family decided to make sacrifices and allow him to go to Spain to train.

In many other sports billions of pounds have been ploughed into them.

Do you understand now?

JRB I have a feeling you even watched the match! :)

The Lions won their test series, and we have the Ashes starting this week with the Aussies in some disarray.

Perhaps he can afford to by a razor now ;-)

Worked hard to get to this standard, played well, deserved to win .... but I still can't stand the little b**ger or his mother!

If only he could learn to be generous to his defeated opponents, I might come round. A little less "I had a good game, I hit the ball really well, I was on top of my game, I'm really really brilliant" and a bit more "He's a good opponent, he made me work hard for it, he played well" would go a long way

Oh - and if he gets a knighthood, I think I'll kill myself!

So I'm led to believe Tcheuchter. :)

I think the 'artistic' look is part of his planning Joe. :)

He was generous to Djokovic Dioclese saying he was the biggest hitter in the game.I've never thought he was ungracious but perhaps I'm biased.