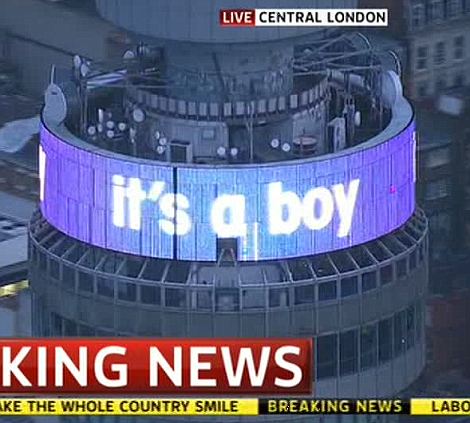 Although I've never been a fan of royalty but I have been amused by some of the nonsense in the newspapers about the arrival of the Cambridge's baby boy.

After yesterday's talking heads drove themselves into a frenzy on the news channels, I suppose we could expect little else in the papers today.

However, in an effort to prove my cynicism does not over-rule my manners, I congratulate the parents on the arrival of their son.

Or, to put it in the words of a good friend (you know who you are), "As Willie Hamilton said, another one on the payroll."

I'm just glad that it is a boy. It will stop all the politically correct politicians and feminists from having to discuss the laws of succession for another 25 years or so.

I wish her well, as I would any mother and her newborn; but ...

- this whole event has been so overhyped by the media that it is now fast approaching the point of nausea inducing.

Having read this comment on the BBC celebratory blog:

"As a British expat living in East Germany and married to a Ukrainian I couldn't feel more proud and happy to be British right now!"

"Yeah, 'cos we Brits can actually deliver a baby. Take that, East Germany and Ukraine!"

Just an addition observation from me: Shouldn't a Brit living in eastern Germany be aware of the fact that East Germany ceased to exist some time ago.

For a minimum stake of £1k, I'm offering a thousand to one odds on his name not being Dwanye.

Other than that it's not the bairns fault, but he will soon be brainwashed into believing the blue bloody mythology.

Tsk Rosie, are they not known as the Strathearn's or sum such up here? And not a great distance from Dundee either - Cambridge's indeed.

Tris, doesn't it show how poor our education system us nowadays?

I gave up with TV and radio early on JRB.