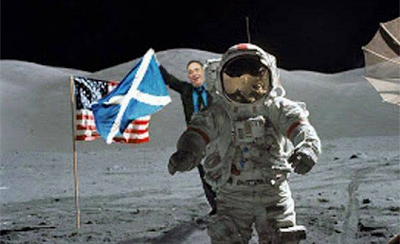 Found this on Facebook.  It made me smile.  I hope you do too.
Tweet
Posted by subrosa at 11:04

But there is no shadow, wind, stars etc.!!

I'm surprised they let Mr S into their hangar at Area 51 while they were filming.

Sadly, an obvious fake, that flag of the USA and whoever is in all that protective kit and in front of the first man on the moon who travelled on the Edinburgh Tram are clearly added on.

Now that image has benefited from your additional exposure Rosie, I expect the "Salmond + Saltire" meme to pop up everywhere.

No turbines either Jim. :)

I didn't think of that Joe lol.