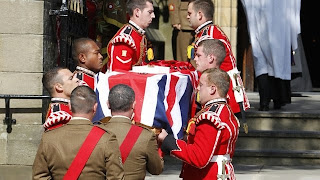 The body of young Fusilier Lee Rigby arrived at his regiment's garrison church yesterday and a honour guard from his regiment remained with his body overnight inside the church.

Today he will be given a full military funeral and there will be a private committal on Friday.

I don't intend to say more other suggest we spare a few seconds to remember the horrific death Fusilier Rigby suffered on the streets of London.

May his family, colleagues and friends support each other for as long as it takes.
Tweet
Posted by subrosa at 09:11

Our thoughts are with his family.

And we must not forget the bravery and humanity of Ingrid Loyau-Kennett; and, Amanda Donnelly & her daughter Gemini Donnelly-Martin.

No indeed Joe, I should have mentioned them too. There's so much I couldn't say about this but I won't at present.

On the Glorious 12th, at Bury, they claim to bury Lee Rigby...

The Woolwich terror suspect Michael Adebolajo was best friends with Lance Corporal Kirk Redpath who was killed by a roadside bomb in Iraq in 2007.

Michael Adebolajo was consoled by friends at the funeral of Lance Corporal Kirk Redpath.

Michael Adebolajo may have joined MI5 in 2007. In 2010 he was apparently in Kenya working for MI5.

Ingrid Loyau-Kennett could be a spook?

Aangirfan, thank you so much for the links. Hope readers notice them.