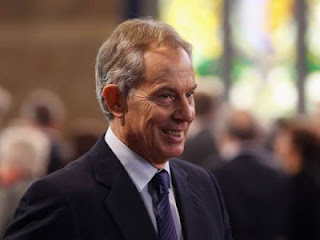 Tony Blair says "There's a problem within Islam."  He should know. He helped create it.

He permitted preachers of Islam to live here and freely expound their messages of hate against 'non-believers'. Anyone who spoke out about this was denounced as a bigot.

Conflict in the Middle East is helping radical groups get a foothold, Blair said, and the “seeds of future fanaticism and terror… are being sown”. source

Are being sown?  They were sown some time ago under Blair's government.  He goes on to say, "Despite long and hard conflicts in Afghanistan and Iraq we should not be wary of intervention."

Many times I've said our intervention in the affairs of Iraq and Afghanistan will come to haunt us in the future.  Sadly the future is now the present and we have a divided society.

In his article Blair refuses to acknowledge he was one of the prime movers in changing the demography of these islands so rapidly and with little thought for the people living here or for those who, legally, wanted to live in Britain.  Humans need time to adapt to change but were given no time or platform to voice their concerns. What we have now is a diverse society (Blair's aim), but also a very divided one.

Why divided?  There was no control over the number of immigrants and the amount of work available. That left many without income and in desperate circumstances. People felt alienated in a foreign land and without the support of a job, easily drifted into the wrong company. They couldn't integrate because they had no contact with anyone other than those in a similar situation.

By writing this article is Blair trying to rewrite history or is he in cahoots with David Cameron and attempting to justify our - soon to be - involvement in Syria?

Well -with his record wouldn't anybody!

As it is he may rewrite it but few will buy it.

Is this what he referred to in his naff line - "I feel the hand of history on my shoulder". A little too late for Mr Blair wishing his hand on history should have been written in invisible ink - just how much more peace in the Middle East can we take through this envoy's 'leadership?
http://www.al-monitor.com/pulse/originals/2013/04/peace-envoys-middle-east-palestine-israel.html

The way I see it, if you invade someone's country based on a lie, not backed by the United Nations, of which you like to consider yourself a "senior" and "important" member: If you kill tens, if not hundreds, of thousands of people directly by bombing their homes, maiming their kids, murdering their pets, destroying their lives, and then (because you are an incompetent fool with the world experience of a gnat), you leave their once relatively stable country, with its moderately progressive regime, in utter chaos, in the hands of terrorists and with almost no functioning infrastructure, then you are bloody lucky that all they do is blow up a few of your buses and metro trains and behead one soldier.

What on earth would britain do to a country that DARED to go to war against it illegally and left it totally crippled (not that we would notice much).

Hell mend Britain. Until it learns to keep its stupid uneducated nose out of other people's/countries' business, it will get what it deserves.

Britain simply cannot assume that it can do this kind of thing to other people and suffer nothing by consequence. Britain is NOT special.

It wouldn't even be so bad if the country hadn't just been shown by research, printed this weekend in the Herald, to be the most inefficient and most unequal country in Europe through the "reigns of Thatcher,Major, Blair, Brown and Eton Boy.

Maybe if Mr Blair had put his mind to running Britain instead of hunting (and getting) his congressional medal by crawling up Bush's bottom, we wouldn't be in quite so much shit as we are.

May Blair rot slowly in hell... and preferably soon.

His legacy will be the bane of our grandchildren's lives Crinkly.

Tris, I agree Britain is not great but it would be easy to bring us to a standstill. All that's needed is a few of the 'big boys' to decide sanctions against us.

I can't understand why he wrote this at this particular times unless he was trying to write off his dubious involvement in these wars or helping Cameron pave the way for further involvement in Syria. God help us.

I have not doubt SR that he is working in tandem with Cameron. They are two of the same type.

The kind who should never be prime ministers in the 21st century.

Rich boys educated away from the common herd with utterly no idea what life is about, and an eye for the main chance.

I have no doubt that Blair will be behind the right wingers in the Conservative Party to want to get involved in Syria, probably an even stupider thing to do than involvement in Iraq and Afghanistan.

The unfortunate thing is that it's never THEIR heads that are cut off, presumably because, at our expense, while people all over Britain starve to death, Blair and Cameron get protection.

Unfortunately Tris, that's the way UK politics is going - only the rich will make it all the way. Bit like America.