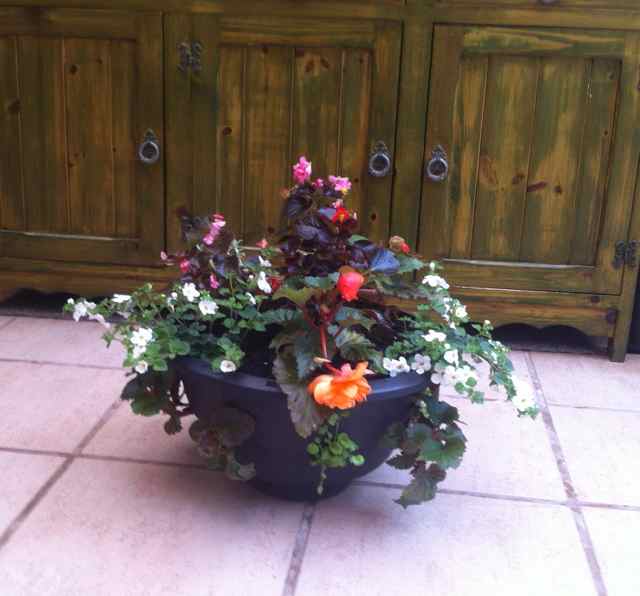 It's been a busy week here and I've had little time to be indoors on the computer. My house is old and requires repointing so I spent a couple of days taking off most of the cement pointing the last owners daubed all over it, in preparation for my lovely 81 year old builder to arrive sometime soon.

As I was finishing late yesterday afternoon, Jimmy pulled up in his van. "I cannae start til the end o' the month," he said, "The wife's organised a wee holiday in Devon then war gaun on yon train up the west coast."  It appears it'll be a few weeks I have to wait, but by all accounts, it'll be worth it. The plants I have ready to put in the small borders will just have to be placed somewhere else.

It took months to find Jimmy because I wanted the pointing done correctly and not just more cement slapped on the sandstone. There are no builders with the skill of applying lime mortar around and when I discussed this with Jimmy recently he insisted that the young don't want to get out of bed in time to meet work's requirements.  Throughout his working life he's taken on many apprentices and 'they've all gone on tae earning a good living' (his words), but in the past 15 years he stopped.  Why?  Because he was weary waiting for them to arrive for work and the knock-on effect was the customer felt let down.

After meeting Jimmy for the first time I made some enquiries round and about, as you do.  Most people didn't realise he was still working as he'd been very ill with prostate cancer a couple of years ago, but everyone spoke highly of his standard of workmanship.

I noticed last night he was, not so discreetly, examining my standard of cement removal. "I'll sort that nae bother. Ye've done yer best I can see."  I thought so too. Perhaps I was a little too careful because I'm aware the sandstone crumbles easily.

Oh, the image is my first basket for this year. I'm trying out the type which requires no liners. It's now hanging in it's place and the other four have been completed.  Amazing the energy a little sunshine gives!

Maybe you could become his latest Apprentice, Rosie.

You've obviously got the basic skills, and, the right frame of mind.

Think of all the luxuries the extra income would fund!

Have you seen this?

Glad to hear you are full of beans again Rosie. Regular sunshine makes a big difference to mood and energy.
I was plagued for years by an elusive leak in my roof which only manifested itself after hours of torrential rain. Countless roofers assured me they had found the source and fixed it, to be disproved when the next downpour arrived. Finally a neighbour put me in touch with a local roofer, a delightful person who took time to examine the roof and discuss the problem with me. He told me he had found a ten-pence sized hole in the flashing and would seal that but was not convinced it was the source of the problem. He was right and readily came back when I rang him that the leak was in full flow.
He then fixed it good; no problems since.
Apart from there not being ten of him, his one fault is that he hates the paperwork side of running the business. I had to prompt him to bill me and when he did, he apologised for the late rendering of the account

God bless Jimmy and all tradesmen of the old school. We must look after them very carefully. Once they are gone, we are on our own with the fully certified, useless tick box brigade whose ineffectual professionalism is largely measured by the size of their bills.

Jimmy might be interested in a link from the web site Archaeologica latest news a couple of days or so ago about ancient Roman cement being superior to modern cement.

I don't think he'd take me on Joe. Too slow and he's fitter than me although 13 years older! He's also a prostate cancer sufferer and has the indignity of a catheter, but says that doesn't matter as the local health visitors know what to do if that goes wrong.

No I hadn't Ranty but it now heads my TYP list for tomorrow. I'm raging.

Know the feeling about getting a tradesman who's really interested.

My plumber is rather like your chap. He hates paperwork and just can't handle computers. Yet he's excellent.

I think Jimmy is the last here Edward. It's very sad really isn't it.

Mind you, my young electrician is good but he was trained by his grandad who, when he died, left him money to set up on his own. He does well because he's good.

Oh Demetrius, I'll dig that out and show him it on my iPad. Many thanks.

Don't despair Edward: there are some good tradespeople out there still to whom quality is still the priority. My nephew is one such person. He is a joiner and is now on his own working and doing well. He was inspired by his grandfather, my own father, from the age of two. My dad had retired by then but still did lots of work with wood at home and my nephew spent a lot of time with him watching and learning. He has done lots of work for me and for others and he is meticulous. I know my dad would be very proud of him.