Bullying By The Scottish Government 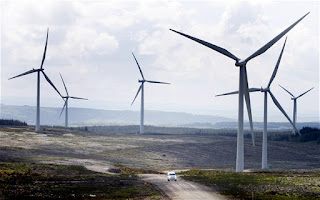 These days only a few believe, hook, line and sinker, in the MSM's reporting, though sometimes the evidence is too strong to dismiss.

However, if this is true - and unfortunately it seems to be case - then my faith in Alex Salmond's government has fallen to a new low.

In the past year or so I've heard the whispers about pressure being put on various people to pursue the SNP's determination to cover Scotland with wind turbines, but I had no idea how widespread, or true, it was - until now.

This is a folly the SNP will regret for many a year. Quite a bit of the SNP's support lies in rural Scotland where there is an atmosphere of discontent; not only about windmills but also planning permissions for developments on land which was designated as green belt.

Rural dwellers are far more likely to vote than those who live in cities.  Perhaps that's because they know, or know of, their MSP.  Rural politicians, because of the sparser populations, are usually recognised and some make great efforts to approach every section of communities.

It's not often I sing the praises of the Westminster government, but with regard to windmills the Coalition's new policy has windmills in perspective:


The Telegraph article may make uncomfortable reading for SNP members and supporters of independence, but unease shows just how wrong this bullying behaviour is and should not be tolerated.

Will Scots wake up before their lovely country is covered in wind turbines?  I would like to say yes, but I hesitate to do so.
Tweet
Posted by subrosa at 09:07

True or not. You'll forgive me for taking anything the Telegraph reports about Scottish affairs with a pinch of salt.

That said, wind turbine development should be done with a bit of thought for the local area in which it happens.

The carpeting of beautiful areas of Scotland does seem to fit the theory that Mr Salmond has persuaded the eco-loonies in Westminster (who believe that we should reduce CO2 emmissions by 2020) that one way of achieving this is to purchase renewable energy from Scotland (no doubt to include the double/treble costs of ROC). The Scottish government will purchase back when required normal tariff (evilly produced) electricity, thereby halving the Scottish costs.

Just suppose that the climate is changing.

What happens if the 'change' is to a regime of no wind?

What happens if our skies are always cloudy?

I remember when the BBC told us we were going into a new Ice Age. Then it was 'global warming' and they told us the lawn would be a thing of the past and that the seasons were getting earlier.

Then it was the drought and water resources would never recover and then three months rain in a week and 'warming' became 'change'.

Then we were being told to delay the April plantings and everything was weeks late.

I'm so glad the 'science' is 'settled' and Peter shouts "Wolf! Wolf!" and no one listens.

Relying on wind turbines is like saying that a couple of AA batteries could light your house, "It's life Jim, but not as we know it".

The SNP Government is quite happy to trample over rural communities and impose its centralised, target driven wind turbine madness over us rural dwellers.

I feel like I am now living in a dictatorship and I have lost my human rights. I have a wind farm with full planning permission at the back of my property, one planned for each side,(one passed, one in consideration) and an offshore one, which will be clearly visible from the front. I am not happy.

Our council made the applicants for the onshore developments carry out environmental impact assessments. Now we have yet another applicant by us wanting to put up an initial two turbines, next to a recognised area of wildlife importance, who was also told to have an EIA. That developer went above the wishes of the local council and local residents and appealed this decision to the Government, who of course waived the need for the assessment. Yet another full planning application is now with the council. If this is turned down, no doubt they will appeal to the Government again. To hell with the locals, hen harriers, ospreys etc., the dear leader in Edinburgh must meet his target.

… in rural Scotland where there is an atmosphere of discontent;

Discontent !!! – for those of us living in the rural Highlands, we are not just discontent – we are incandescent !!!

The planning authorities have shown no thought or regard for the opinion of local populations, small though these populations may be.
They have ridden rough-shod over us all cow-towing to the wishes and demands of the energy corporations and the political dogma of Holyrood.

Their legacy to Scotland is a landscape scared for generations to come all for the sake of a grossly inefficient means of generating energy, but one which saves face for far too many verbose MSPs.

For the last millennia the Highlands of Scotland has been world famous for its rugged beauty. The tourist industry has been one of the Scottish economies major successes.
It has all now been put at risk.

A curse on all windmills.

I have always felt that Salmond is a bully. I know that my viewpoint comes as a result of reading English newspapers and watching English TV, but it always seems that should you disagree with his views, he will simply try to shout you down. Certainly when interviewed by TV reporters, when he doesn't have an answer to a question, he tries to attack them personally, so it is clear why sections of the media don't like him.
This decision to try to force windmills on unwilling councils is typical of his bullying. In any case, if the Scottish Courts are anything like the English, there would be a good case for a judicial review of the "examination report", as it is clear that its contents have already been decided in advance, hardly an independent review.

C'mon Rosie & her readers, Wind Farms are becoming a major tourist attraction. Think of the boost to Scottish coffers, of the thousands of visitors attracted north o' the border to gawp at the mechanical marvels.

Even Visit Scotland, our national tourism organisation, has become a propaganda mouthpiece for the SNP government and the windfarm industry, and is now brainwashing the poor bl**dy tourists.

Maybe you don't believe the Telegraph pa_broon, but it's also headlines in my local paper. Perth and Kinross are being given the same treatment.

David, if Alex Salmond believes what Westminster says then he's a fool. I've never regarded him as one but perhaps I've deceived myself.

Exactly Jim and many have been saying that for years.

Strange in very recent days, we hear little of climate change and nothing of global warming.

Oh Dave, how appalling. I really sympathise with you. At the moment I can't see windmills from any of my windows, but I'm told a 'farm' is planned for the hills I see from my bedroom. That's small beer compared with your situation.

I too put a curse on these things JRB. Let's not forget that we all pay for the things through much higher bills.

EP, it's not only windmills but other planning consents that the SG is showing bullying. One local development here had over 100 against it because it was on green belt and the houses unnecessary (because there have been over 200 houses still for sale after being on the market for 2 years).

The developed was passed.

Aye Joe, aye. One as a visitors centre is fine, but when tourists realise that they're round every corner the novelty wears off.

Jings Dave, I'm shocked at that. The school should be told not to participate.

I have been wondering what will happen when the windmills begin to fall apart years before they should do as a result of climate change. How ironic would that be!