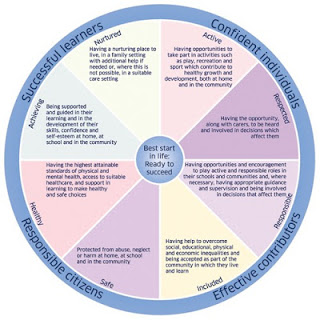 The Scottish government's determination to catalogue each child from the cradle (or before) to the grave has gained international derision.

Susan Martinuk, a respected Canadian journalist, states: '...Scotland is demonstrating the outrageous situations governments can create when they forsake the basic laws of common sense'.

Another point she makes which resounds with many is the enormous bureaucracy which will be required to put GIRFEC into practice.  What other sections of our social care network will be reduced?  In my area alone health services are stretched well beyond capacities, yet doctors struggle on to help the few who gain access for help with chronic pain or severe breathing problems.  Hundreds more are on waiting lists, hoping for help before its too late.

The money has to come from somewhere for programmes such as GIRFEC.  Will the health service be hit, or transport, or some of the other services provided by the taxpayer?

Who knows.  Perhaps Orwell knew but decided the scenario was too horrific to put on paper.
Tweet
Posted by subrosa at 09:06

Really not keen on this Girfec idea at all.

Other than the post you had on here from the slightly over-wrought woman who branded the SNP as Nazi's, is there a petition against this or some sort of consultation?

I've had a look about but can't find any concentrated, orchestrated vehicle.

The entire thing is just sinister and as you say, unwieldy. (The Scottish Government website on GIRFEC is a lesson in the absolute worst of management consultancy-speak.)

Perhaps you misunderstand the ultimate objective of the scheme, Rosie?

Could it be, that it's simply a non-productive-job creation scheme, to keep a number of bean-counters and a greater number of administrators and 'managers' off the Unemployment Register?

JP is correct, it's the ultimate job creation project. There is no input cost and nothing is created, thus no polution or waste - just makework for thousands of administrators and clerks.

This has been developing behind the scenes for a long, long time. There is a bit of the background here:

Canada should also be concerned.

What is happening in Scotland reflects global trends towards a new system of economics and governance - we are just a wee bit ahead. Girfec (which measures and monitors individual and family "wellbeing" and is being extended to cover community well-being also) is an important part of this.

One of the chief architects of this in Scotland has been promoting "the Scottish system" elsewhere, including Canada:

A Couple of Questions –

I always believed that as a parent it was my right and responsibility to love, care, nurture, support and safeguard my child.

Now, as I understand, the State (aka the Scottish Government) is going to step in and take over many of these former parental rights and responsibilities, and that where and if appropriate, will keep parents informed of the child’s progress.

So my first question -
Would it not be easier for the State (aka the Scottish Government) to simply remove all children at birth?
Transfer them to child farms, or other suitable institutions, and only release them back into society once they have become productive entities moulded into the correct political will of the State (aka the Scottish Government).

It does indeed sound worryingly Orwellian.

You raise a very serious issue of subsequent 'legal responsibility'.

IANAL, But probably not so much 'the parents', but the child, could well have a very strong case to be able to sue the State (aka the Scottish Government) and its ‘named person’ for failure to fulfil its duties.

I've posted it to my own blog.

All very good, but I was getting the impression from some press reports that there are already plans to extend the monitoring of children to adults.Like possibly at the end of the year?
JRB. The Germans were doing this in the 30's, The "Lebensborn" Program
http://www.jewishvirtuallibrary.org/jsource/Holocaust/Lebensborn.html
but if you think on it, the introduction of the Stasi is a logical progression from it.
And that seems to be where we are heading.
Did no one wonder why we are being asked to be "independent" in or under, makes not a lot of difference, the EUSSR?, and why no one seems to speak about this?
Our communications are being monitored by various agencies, even
Skype has been for years it seems, so we are already being watched.
Did you know there are more cctv cameras here than in North Korea ?
Monitoring the children is the last, not the first step in the enslavement!

Pa-broon, there are certainly many against this but the voices are being stifled as much as possible. I've seen a petition somewhere. Will dig out the link.

If it is then it's a very sinister one Joe.

Frightening though Woodsy. Are parents too scared to speak out about this or don't they understand what it means?

I had one health service friend say it's been happening for years because health visitors do exactly what is described.

My reply was no they don't do anything as advanced as this.

Many thanks for the links Sheila.

Maybe your Q1 is a little too advanced for the present JRB but it's not too far fetched is it?

Q2, oh they can try but we already know the response.

It does resemble the Lebensborn programme Apogee.

What shocks me is the lack of protest from society about this. Are people too scared to voice opinions?

When a major holder of girfec service delivery contracts is a 'charity' and when a 'charity' is Appointed to run the show
"SallyAnn Kelly, Head of Operations for Barnardo’s Scotland, has undertaken a new role. As of 1st February SallyAnn has been leading the Scottish Government's National GIRFEC (Getting It Right For Every Child) Project. The aim of the project is to strengthen the relationship between Community Planning Partnerships and the Third Sector. "
http://www.barnardos.org.uk/what_we_do/who_we_are/scotland/scotland_about/scotland_about_childrens_services_operations.htm
.
When millions of pounds of taxpayers money is filtered through a charity blurring the lines of girfec activities
http://bigblogscotland.org.uk/2013/04/18/tseifawards/
.
When all this is happening BEFORE the bill has even gone through parliament ...shouldn't we all be just a wee bit worried ?

With "political correctness" having run wild in the past few years, most ordinary people are now scared to death to comment on anything or complain about anything because of the threat of official or police action, the populace has been pretty well cowed by examples of heavy handed reprisals for relatively minor things.
Just one more way the people are subjugated and taught to behave !

Gosh! This really is horrific, isn't it?
In every section of that pie chart, the question arises of: "WHO DECIDES?" What is the correct standard of nurture? What is the correct level of healthiness? It is a recipe for disaster since it entirely depends upon 'one size fits all'. Any other interpretation would require absolutely massive resources.

It's so frightening that I've told mine that if they have children don't live in Scotland Junican.

I'm writing to my MSP about this Apogee to tell him I've advised mine never to live here when he has children. It's so horrific this.

Apogee said "All very good, but I was getting the impression from some press reports that there are already plans to extend the monitoring of children to adults.Like possibly at the end of the year?"

Absolutely. Inverclyde is the trailblazer:http://www.inverclyde.gov.uk/jobs-and-careers/about-organisation/

"‘Getting it right for every Child, Citizen and Community’

This means that the Council will work in partnership to create a confident, inclusive Inverclyde with safe and sustainable, healthy, nurtured communities, and a thriving, prosperous economy, with active citizens who are resilient, respected and responsible and able to make a positive contribution to the area.

As part of the Nurturing Inverclyde approach, the Council, along with its partners in the Community Planning Partnership, the Inverclyde Alliance, are focussing on achieving wellbeing outcomes for our communities, which have been adapted from Getting it Right for Every Child. The wellbeing outcomes have been expanded so that they include all our citizens and communities in Inverclyde. "

Thanks for that Sheila. Funnily enough it's brought to mind something which happened to me in the doctor's surgery last week. The nurse was making an application for me to attend a clinic (for an ailment) and one question was 'Is the patient receiving benefits?' She said she hated asking that.

I told her to say my response was protected by the Data Protection Act. Think she may just have put a No against it though once I'd gone because she knows me as a neighbour.