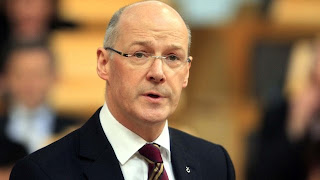 This is the first tax Bill in Scotland for over 300 years and he's picked a good one to overhaul.  I've always thought the current system, the UK's Stamp Duty Land Tax (SDLT) was unfair because anyone paying more than £125,001 for a home immediately falls into the stamp duty bracket and has to pay on the full purchase price of the property.

The devil is in the detail of course, but I understand that under the new LBTT only the proportion of the price above the tax thresholds will be liable for the higher rate of tax.  Unfortunately the rates and tax bands for the new system will not be announced until September next year, at the earliest.

This new system makes stamp duty fairer and will hopefully, as long as the bands reflect house prices throughout Scotland, help those trying to get a foot on the property ladder.

Scottish government ministers are hailing the move as historic. It will be if it makes this property tax fairer for all.

But the objective of a Tax is to raise revenue for your government to spend, not to help certain buyers get a foot on the property ladder.

I am beginning to notice a worrying pattern develop with what the Scottish Government says and does.

"There will be a vote on Independence"
- Sounds good to me. I could support that. Now tell me some of the details
…."we will discuss the details at a later date."

"There will be changes in the NHS"
- So there is to be continuity of care both social and medical. Sounds good to me. I could support that. Now tell me some of the details
…."we will discuss the details at a later date."

… and similarly with other areas of policy.
They offer us the outline of a grand attractive sounding scheme, but never trust us with the detail till it has all become a fete accompli.

And here we are again …

"We are going to have our own Land and Buildings Transactions Tax"
Sounds good to me. I could support that. Now tell me some of the details
…."we will discuss the details at a later date."

However, there is possibly at least one discrepancy is someone's maths / logic / propaganda.

The report claims 'only' 22GWh " .....are thought to be due to the wind not blowing as forecast.", and claims Estimated Additional CO2 emissions at 8,800 tonnes.

This averages at 400 tonnes per GWh generated.

This averages at 459.8 tonnes per GWh

Why is it, that 'errors' almost always seem to be in favour of the Renewables?

Ah Joe, you're forgetting we're a socialist country now. Bags of cash for everyone.

How often have I typed 'short on detail' or words to that effect JRB? You're spot on.

Good find indeed CH and thanks to Joe for his comment. He's the resident expert on these matters. :)

All of which begs the question - By what moral right should they impose a tax on the transfer of property?
This is after all a private transaction between two people buying/seling what is often a second hand article.
Taxes are levied on new sales, eg vat, but there is not a tax if you sell (say) your car or your furniture secondhand. It's a simple transfer of ownership of already sales-taxed items.
For house sales services like searches and land registration are paid for separately by fees, so why should house sales be singled out as subject in addition to a levy by the state?

Well, inevitably I'm going to drop in and point out that while Scottish stamp duty might be less bad than SDLT, it is still a bad tax because it is a tax on transactions, and the best tax on land values is quite simply an annual tax on current rental values.

OMG! - I agree with MW about a property issue!!

Ah pleased to see you contribute Mark. As always on this issue you highlight the discrepancies. Scotland, if it wanted to be progressive, would do away with this tax altogether and raise money elsewhere.