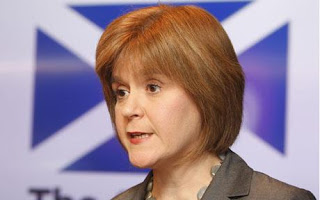 Finally the card playing season has drawn to a close and the past week has involved far too much food followed by hours of sedentary pleasure or pain; that depends on the hand dealt.

Quite a few people know I support Scottish independence and expect me to have the answer to the questions politicians seem reluctant to answer.

One of the questions I was asked was if I knew how having a monetary union with London would work.  I replied I had no idea although I agree with the questioner that it seemed strange to want to be independent from London yet have the Bank of England in charge of our monetary policy.  Nicola Sturgeon, in today's Herald, says:


"An independent Scotland will keep the pound because it is in everyone's best interests, and to try and suggest otherwise simply flies in the face of the facts.
"For a start, the pound is every bit as much Scotland's currency as it is that of England, Wales and Northern Ireland, and as such, it is simple common sense that we should continue to use it as an independent country.
"But that common sense argument is backed up by overwhelming economic arguments.
"We have already had the detailed expert report of the Fiscal Commission Working Group which has backed a currency union in the event of a Yes vote in next year's referendum."

That statement doesn't contain any information about the content of the 'detailed expert report' and appears to be another 'have faith in us because we know best' comment.

Of course another question followed which was: "Why are the SNP bothering with attempts to keep sterling when they insist on being full members of the EU?"  The questioner followed that up by firmly declaring that any country wishing to join the EU has to adopt the Euro.  I didn't argue with him because he's been involved in international law, at a high level, for many years.

So if anyone can explain to me why having a monetary union with England is common sense I'd be grateful.  According to Wikipedia, Brunei and Singapore are the last two nations whose dollars have remained at par and mutually interchangeable since the days when the Spanish Dollar was the united currency of large areas of the New World. It is managed by the Monetary Authority of Singapore.

Should Scotland gain independence will London create a Monetary Authority of England?
Tweet
Posted by subrosa at 09:41

It is so gracious of Nicola to state ""An independent Scotland will keep the pound .....". Presumptuous too.

What if the English, Welsh & Northern Irish have no wish to share their currency with those who leave the Union?

Your questioner is correct. The Lisbon Treaty states that all new member states must adopt the Euro. As Salmond is committed to the EU then it makes no sense to claim you will keep the pound when you know you intend to seek membership of the EU. He's already been advised privately, in any case, that London will squeeze his balls dry in any currency negotiation.

Another example of the terrifying naivete or incompetence of the Nats.

You, and your friends, raise some very interesting questions for which many of us would love to hear a detailed and honest answer.

More and more I begin to suspect (and fear) that those who should know don’t have a bl**dy clue, and are merely winging it with their ‘have faith in us’ mantra.

The more probable explanation in contrast to what JRB has said is that the SNP Government knows damn fine what the reality of the situation is and can't afford to say. If it's the pound then independence is a chimera because it's impossible to see how an independent Scotland can be so under the control of the Bank of England. If it's the euro (if it lasts) then Scotland comes under the control of the German Finance Ministry hiding behind the European Commission. I'd take William's point but maybe add a little squeeze of dishonesty bearing in mind the evasive response to this throughout.

What definition of "independence' is in Alex Salmond's dictionary. He wishes to join the EU, therefore Scotland will not be independent, just a northern province of the Greater EU, he's just cutting out the middle man and gaining himself a seat on the European Council. If Scotland wishes to be independent then you should not join the EU and should have your own currency. Independence means precisely that, you can't have all the good bits and non of the bad bits, and that means a proper border with passport controls etc etc. If Salmond wishes to join the EU then he can have the UK's membership and the rest of us can have independence.

Scotland remaining in the sterling bloc is a smart move. Because a) Scotland would undoubtedly be able to negotiate a greater monetary influence over sterling monetary policy than it would over the eurozone, and b) as a petro-dollar producer due to the oil, if it had its own currency, the chances are it would appreciate quite considerably, especially if oil revenues rise due to oil price rises. This could affect negatively on the rest of the Scottish economy (tourism, food and whisky exports etc).

So by remaining in the sterling area, it removes the 'hard' currency problems that being an oil producer with your own currency brings. And given the rUK economic problems, the chances are sterling will be weak for the foreseeable future, which is good for Scottish exports.

The one problem is if the Scottish economy booms, while the rUK stagnates - monetary policy would then be too loose for Scotland, and could exacerbate the boom (as happened to Ireland in the Euro in the early 00s). One would hope that an independent Scotland would recognise this issue if it arose and deal with it in other ways (tax rises/spending cuts), but then we are dealing with politicians here, who are quite happy to take credit for an economic boom, but less inclined to bring take the punch bowl away as the party really begins to swing.

Scotland would have to agree to adopt the euro 'as and when it could meet the necessary criteria'. This has allowed new entries to the EU to fudge the issue for years. Which is what we would do as well. The Lisbon Treaty explains it all.

The US dollar is strong because countries around the world use it as a reserve currency. Why rUK would want to hinder Scotland from using sterling is a mystery and is just propaganda. Any country anywhere in the world can use any currency they like. And do.

'Independence in Europe is oxymoronic nonsense. You can't be independent if you join the EU because your law becomes subservient to EU Law. And if you join the euro then you have no control over your own money and can't even print your debt away with inflation like the UK is doing.
How indepenndent do Greece, Cyprus, Ireland etc feel ? Weighed down with debt to the EU for generations to come. Do what they're told or they will be given a good "Cyprusing".

The SNP in its present role is fighting for Scotland to gain its independence. It is not seeking to create a new world order. Even to attempt such a thing would be ludicrous.

To retain the pound during a period of transition and intense negotiation makes sense, especially so when you consider the option does not restrict any future options being considered and possibly adopted.

Claiming Scotland would be less independent than any other independent nation on earth because it uses a currency zone is simply fatuous.

Given the number of times over the years I've had Scottish bank notes refused in England (and even more elsewhere) - this could get interesting...

If newly independent state A decides to use a currency from state B then it is not independent in the fullest sense of the word. There has to be continuing interaction and given the difficulties of economic prediction it is unwise to assume that this will be happy or miserable. If state B's economic needs or policies differ to any degree from that of state A there are major potential problems.

Didn't Ireland try to keep the Pound when they first became independent? At some stage this became impractical and they introduced the Punt, which the Bank of Ireland managed and which it tried to keep broadly at parity with sterling until they joined the Euro. And now look at the mess they are in financially.
True independence only comes when a country has, and can manage, its own currency.

The sterling area does not belong to England nor the central bank of the UK ,regardless of its name -----all three nations and one province have a stake in it -----------When independent, Scotland could easlly set up its own currency but it would be so highly valued that it could hurt exporters into the remaining sterling area and euro zone----------------------the london treasury will be delighted for Scotland to remain in the sterling area [forget the politically inspired moans coming from Osbourne] as this will insure that with Scottish oil reserves proping up the pound ,England and Wales wont lose their credit rating and the pound wont slump----so their is a mutual benefit for both parties .------------as for interest rates being set by the central bank in london [a bank which is in part belongs to Scotland] remember Scotland has no say at it stands but with negotiations and the fact of Scottish oil reserves holding up the pound that situation will change ----------------------------the truth sometimes leaks out in odd ways------------------------------"A Tory MP has urged the UK Government not to forget the “enormous” economic importance of North Sea oil and gas.----------- Nicholas Soames, a grandson of wartime prime minister Winston Churchill, will put the industry back on the political agenda today after securing a debate on offshore taxation at Westminster. He believes it is as crucial to the economy as the City of London – describing it as “a goose that lays a golden egg”.

I think that's the attitude of Westminster at the moment Joe.

I'd rather think it was naiveté than incompetence William. Of course I would, wouldn't I?

'Blind faith' was used several times if I remember JRB.

Aye, my feeling is that they're either covering something up or being foolish Richard. I would like to see the 'experts' report though.

Thanks for your contribution Phil. I concur.

Even though we are an oil producing nation, I don't see us having that much influence as it will obviously be an English Monetary Authority Sobers.

Hwever, I see your points and look forward to some detail from the SNP.

You've introduced some thought provoking points keep looking up. Thanks.

I wasn't claiming that Crinkly. I was asking why they would want to keep the pound as most people seem to think they will be forced to join the Euro as they insist on being a full member of the EU.

Ay Gordon. Even last year, when handing over a Scottish £20 note in a small supermarket, the checkout lad had to ask his supervisor if it was acceptable currency.

Catherine, many thanks for your excellent comment. Just out of interest, who is responsible for the sterling area?