A 'Not An April Fool' Story 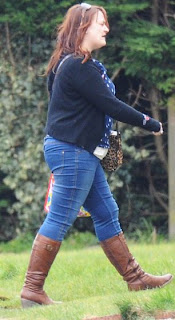 You could be forgiven if you thought the following story was an April Fool, but sadly you'd be wrong.

WPC Kelly Jones (pictured above on Saturday) is suing burglary victim Steve Jones (no relation) after she tripped on a 6 inch kerb at his garage.  Her demand is £50,000 and her claim, made through a 'no win no fee' law firm, is underwritten by the Police Federation of England and Wales.

If this action is successful, everyone who calls the police in future could face being sued for damages unless they can prove they have carried out a risk assessment and taken elaborate precautions to warn officers of the potential hazards on their premises.

Why is the Police Federation backing this ridiculous claim?  Seemingly it's because it takes great pride in having won more than £42 million (mainly taxpayers' money) in compensation for police officers in just the past two years.

The police are experts at using the compensation culture.  They seem to spend much of their time suing each other and their employers.

WPC Jones is an especially appalling example of a breed of so-called public servant and doesn't deserve to wear the uniform of the police service.

This merely serves to reinforce my ever increasing disdain for our modern day police force.

This, sadly, after three score years and almost ten, has now virtually sunk to the level of contempt. A state of affairs which gives me no joy, for I believe society deserves much better from those who would wish to serve and protect us.

And in a similar vein, I wonder how the new megalithic Police Scotland will be judged by its public.

It seems quite a lot of police 'retire' once their 25 year 'service' is completed, accompanied by an industrial injury claim and incapacity benefits as a 'top-up' to their pensions.

I thought police constables were coached in the art of 'observation'.

Mind you, with a gut like that, would she she the kerb coming anyway?

Twenty years ago or so a friend of mine had a fire at his sub post office.

A few days later he had a letter from the fireman unions advising him that he was to be sued because one of the firemen was hurt.

When they went on strike they wouldn't allow access to their equipment and vehicles. They didn't belong to the firemen they belonged to us the taxpayers.

It's a pity though that soldiers cant sue. Now that would be interesting!

I had a look round to see if the Scottish PF were so enthusiastic about protecting their officers so well JRB, but found nothing documented. Quite possibly they attempt to keep it private.

Wouldn't want the hoi polloi rising up would they?

Many go back within weeks in civilian posts too Crinkly.

Not any more it seems Joe,

I was going to say something about her lack of athletic physic Rightwinggit. :)

Aye indeed, but the soldiers don't have a union like the PF. But if they did ...