Should All Children Be Vaccinated Against Influenza? 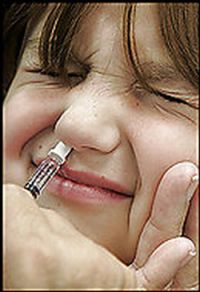 Last year it was suggested by 'experts' that a new universal vaccination programme should be introduced to protect our children against influenza.

At the time I thought it was another ridiculous idea which would drift into the long grass.  However now the Scottish government are planning to vaccinate every child in Scotland.

Children already receive 12 vaccinations against eight diseases by the time they start school.

It's well documented that the flu vaccine is not effective because science has shown that there is no single virus that causes the flu.  It takes time to produce vaccines so a new vaccine can't be instantly produced when a new type of flu starts to cause problems.

The Scottish government says vaccinating children is a 'cost-effective' way of cutting flu cases in adults, but campaigners said the proposed flu vaccine, Fluenz (the same one proposed for use in England), is a weakened form of the live virus which is administered using a nasal spray and is in fact a 'very effective way to spread flu'.

The campaigners also highlighted warnings from the makers that there is a chance the virus in the vaccine could cause infection if it was transmitted to someone who has a weak immune system.  However the Royal College of Paediatrics and Child Health agrees every child between the age of two and seventeen is to be offered the vaccine from next year.

I do hope the majority of parents shun this latest craze because I cannot see pumping children full of vaccine, when it's recognised that it will not be effective, is good for their health.

This makes me wonder who is the greatest beneficiary from this latest idea?  It's certainly not going to be the children so surely it can't be Astra Zeneca, which is the pharmaceutical company making the new vaccine.  Oh another tiny detail - it's made using hens' eggs so cannot be given to children with a known severe allergy.  All seasonal flu vaccines must be updated annually to match the three most common strains of the disease in circulation.

A nice wee earner for Anstra Zeneca I think and at the expense of some children's health.

As a footnote, I'm offered the flu vaccine each year, but politely refuse it. I witnessed my mother's reaction to it for some years, yet her GP (with her agreement) continued to give it to her. It took some weeks for her to recover from the side effects, but as she treated all doctors like gods, she believed her GP was doing his best for her and wouldn't listen to other advice.

I am opposed to my having any vaccine against any disease that is not generally life threatening.
When I turned sixty, I was offered the flu jab, and foolishly had it for a few years until one year it made me really ill; it messed up my sleep and my memory, I couldn't concentrate and felt totally lethargic. The doctors, of course, dispute that this had anything to do with the jab and try to put it down to old age. Nevertheless, I'm convinced as to the cause and my internet research seems to indicate that I'm right. Avoid it like the plague!

Whilst I am greatly in favour of preventative medicine, and fully recognise that for many influenza can be a major and even a life threatening illness.

So, for those at risk, including children, either due to an underlying condition or because of age, the flu vaccination is rightly available. But even within these vulnerable people there is no better than an 70-80% annual uptake.

However the worst statistic of all, and perhaps somewhat significant, is that although the flu vaccinated is offered to healthcare workers there is at best only a 30% uptake from within this group.

Healthcare workers are by their very profession in contact with the population when it is already at its weakest and most vulnerable due to illness.
So if they do not see the need to immunise themselves and thus protect the public, where is the logic in the mass immunisation of school children in order to protect the public?

By imposing vaccination on all children, I fear once again the Scottish Government is bent on another act of social engineering not for sound clinical or welfare reasons but for ideological and political dogma.

Perhaps the SG is trying to make these vaccines available based on the best professional information available to them.

After all, none are compulsory.

Individually I've had the flu jabs every year since they commenced. In that time I've never had a reaction and while I've caught colds, never had flu.

Now whether that's down to the jab or just unadulterated luck I wouldn't know but the choice is mine and I choose to take it.

I never had flu in my puff, until the year I was "convinced" to take the vaccine. That year I had flu THREE times.

Even if this policy was likely to achieve its stated aim of protecting vulnerable older people and saving loads of money - which it won't - it is a step change we should be wary of.

The herd immunity argument has been around for a long time but this takes it a bit further.

Mass medicating any section of society (with associated well-documented risks)for the "collective good" (of the well managed herd)should be worrying enough...

But children!! They will get away with it too :(

In the USofA in most states being vaccinated is a legal requirement for children. By law, Big Pharma cannot be sue for the bad effects caused by their vaccinations.
Is it coming here?

Can't do anything but agree EP. I too have decided to take my chances without it.

How could I dispute anything you say JRB? Yes I should have mentioned health care workers but it's the effectiveness of this particular vaccine I question.

It's a difficult one offering 'choice' Crinkly. I remember many years ago objecting to whooping cough vaccine (for good reason) yet the school sent me a note asking why because 'all other children in the class were partaking in it'. Difficult to explain my reasons to a child in these circumstances, but I did tear a strip off the headmaster for sending such a letter via a young child.

So it wasn't effective then FT? ;)

Aye exactly Sheila, another step towards the social engineering. Worrying even though part of the reason is commercial.

Thanks for the link Apogee. I knew I'd read that somewhere - about BPharma being protected from being sued.