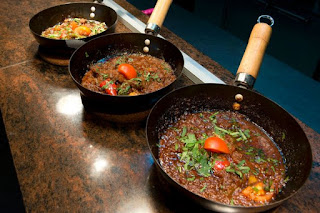 I like curries but I prefer to make my own because most curry houses use turmeric and it doesn't like me.  Also I've always been just that wee bit suspicious of the contents of a restaurant or takeaway curry meal.

Perhaps the old jokes about curries containing meat of dubious origin did have some substance after all.  According to the Daily Record 1 in 3 curries are fake as Scottish restaurants use cheap beef instead of lamb in their popular dishes.  A secret report by food watchdogs said cheap beef was passed off as lamb in the popular bhoona and korma dishes served at 46 of the 129 restaurants tested.

Of the 46 selling curries which were advertised as lamb dishes 33 of them contained no lamb whatsoever.

“The results confirm that significant lamb-based curries offered for sale in Indian and other similar-style restaurants and takeaways were falsely described as they contained either no lamb or a mixture of lamb and meat.
“A significant minority of food business operators appear to be intentionally
mis-describing food.”


But here's the unsavoury part - the Scottish Food Enforcement Liaison Committee refuse to name the guilty restaurants. The report covers 18 months of testing when inspectors posed as customers.

It seems all of those businesses were warned that further random sampling would take place and that any future offences would be reported to the procurator fiscal.

What I have never understood is why these businesses aren't closed down immediately when such gross violations are discovered.

Professor Pennington says this is food fraud and who could disagree with him? He also says "the public have a right to know the names of premises.  After all they are acting illegally."

Why are we, the taxpayers, paying for food inspectors when the results of their work is not published?  The only way this type of fraud can be curtailed is by publicising the offenders.

"Indian and other similar-style restaurants and takeaways ...." are happy to display the Local Authority Food Hygiene report, when they've received a good one.

That's interesting , I always thought (back when I used to eat curries)that my lamb rogan josh was a bit too chewy. But put it down to maybe a more flexible interpretation of 'lamb' i.e mutton instead

but now more than likely it was probably stewing steak which thinking back makes sense .

Haven't found a take-a-way yet; they all want you to pay for it.

On food these days all trust is gone. Well, apart from Morrisons.

Laughed the other week at all the posters in Tesco claiming they'd "learned the lesson", that they were "listening and acting" only for them to be caught again this week on another product that has horsemeat in it!

One local curry shop sells 'meat curry' - that neatly gets around any problems of inaccurate description. I have yet to sample it.

I had a chicken Madras this evening and to be honest, it wouldn't matter what the meat was. They don't skimp on the hot stuff. It's a plate of fire with lumps in.

There isn't likely to be beef instead of lamb in the local takeaway, it's run by a combination of Muslim and Hindu guys so there is neither beef nor pork on the menu. It's pretty much all lamb, chicken and seafood.

I can't rule out horse though.

That's true Joe but any food place ought to be forced to show the current report don't you think.

I went off curries years ago after my brother took me to a restaurant and I was ill for a week PC. Think it was just too much spice but that's with hindsight.

The price here is expensive too Crinkly. At the Indian a takeaway for two is at least £20 I'm told.

Aye Jo, Morrison's are doing a reasonable job by all accounts. I used to shop there a lot when I regularly went to Perth.

I wouldn't be rushing Woodsy. Cook your own. Mind you the smell lingers but a peeled potato left in the kitchen helps as does washing up right away.

Ah you're another who just likes the heat Leggie. Cast iron stomach too. :)

You are always well advised to take "Named meat" 8Terry Pratchett fans will know what I men. :-) )

At present the "name" appears to be "Black Beuty"..... or Dobbin, depending on your litary upbringing.

I was interested in your point about the penalties for misrepresenting (for example) beef instead of lamb.

I'm sure you wouldn't get a second offence.

I agree Rosie. The shock for me in all of this is that no a single outlet has been fined for breaching Food Safety Law. The only major supermarket not caught up in it is Morrisons. It was the only one to emerge with a clean bill of health.

The failure of major food chains to properly monitor their products and their sources is very shocking. Yet what did we get from that ridiculous man Owen Paterson, the Tory Enivornment Minister? He was out there urging us not to boycott those stores and not to stop buying food from them! Personally I'd have imposed immediate £1 million fines on every last one of them just for starters. Cameron pulled the same stunt by seeking to protect the supermarket chains and to hell with the consumers. I suspect he was more worried about Tory donors being offended if he punished Sainsbury's or the rest of them!

What a shower they are!

Strange world. I would actualy be willing to pay MORE for a horse steak, than for beef,.

As far as I am concerned, they are silver plating gold.

I do prefer to know what type of meat I'm eating though FT.

That's what should happen John. Why we pay for officials to inspect these places then don't take immediate action if a place falls short beats me.

Exactly Jo. What a shower they are indeed. The big boys know that they'll get away with most things so they will just saunter on fleecing us at every turn.

I shop at Morrisons when I can. Have always liked that shop.