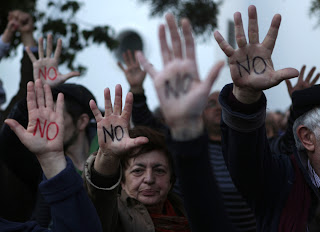 An interesting analysis. Countries do not have eternal friends or eternal enemies.They have eternal interests which they pursue in different ways in different times.Something which the UK government, fixated on the EU and the "specialrelationship" with America as ends in themselves, appears to haveforgotten.Germany, of course, has formed much of the architecture and policy ofthe EU to pursue long-standing aims which the German political class hasheld since before Germany became a united political entity.

Editor's note: Edward, like myself, keeps a close eye on German politics and the fact that he is proficient in the German language helps.

In response to the analysis I would be prepared to place a few shillings on a secret agreement between Germany and Russia as suggested in the article.
Tweet
Posted by subrosa at 09:31

a depositors savings, regardless of who they are or how much they have, should be sacrosanct & are infact protected by world wide laws but that doesn't appear to stop central banks from trying to steal them
if they can steal little cyprus's money everyone else's will be next this is a test case for them to see if they can get away with it

people shouldn't make the mistake of thinking words like communism or fascism or capitalism or corporatism or whatever word used are any form of idiological system or movement, they are not they are all just camoflage words for modern day fuedalism
you are still the slave whatever system you a lead to believe in

why do you think all politicians are all lawyers? your best interest are not what they want [even the likes of alex salmond, nae offence]

We have to ask ourselves why has Europe gone down this road to economic and possibly civil disaster – the answer is simply to appease Germany – Oh! how frighteningly that smacks of history repeating itself.

As ever, Germany exacts a very high price, a disproportionately high price, for her support. So much for a united Europe; their motto of “United in Diversity” has a somewhat hallow ring at this moment.

No doubt she, and the rest of the EU, were fully aware of the high level of Russian involvement in Cyprus, but they have deliberately and knowingly set themselves on this confrontational path.

All of which takes me back to my initial thought – that this is history is repeating itself.

Will we once again hear Liszt’s ‘Les Prelude’ ring out across Germany and the greater part of Europe?

When the 1914-1918 War broke out wasn't one of the main causes a network of secret treaties? Now we are in an economic war.

Demetrius is right - the global war is financial it utilises mythological logistics and recognises no boundaries.

Gazprom is a possibility but a Russian naval base close to a existing UK base?

I suppose we could send out our two new UK carriers [sans planes]to block it out?

More or less what I've been saying for years (and on my blog recently).
Germany lost two wars trying to dominate Europe. Before WW2 anyone visiting Germany could see the preparations for war (Why all the autobahns with so few civilian vehicles?) We didn't want to believe war was coming until it happened.
Having lost two wars, Germany is now trying to dominate by financial means, via the Euro and the EU. But, like the preparations for WW2, nobody wants to believe this. But if they are not stopped, the time will come when Germany is pulling all the financial strings and approving the appointment of prime ministers.

A Russian move into Cyprus would seem logical given tht they are likely to lose their existing base in Syria.
Why not sell them Akrotiri or Dhekelia and be done with it?

English Pensioner, I can't find your blog. what's the address?

A fair degree of near unanimity here, I think. I was interviewed some months ago by two very pleasant young men fro Norddeutscher Rundfunk and they seemed genuinely sad and puzzled that so many British people felt the way they did.

If we had been educated in Germany, we would have learned all about the first modern "Common Market", the early 19th century customs union between the many German states. This was highly successful in boosting their economies. It would be an assumption, even if unspoken, that any country entering such an arrangement did so at least with a view to the possibility of political union. We now know from foreign office papers that the British Foreign Office was quite happy about that prospect as early as 1971.

As enosis, favoured by many of the EOKA terrorists who still have political influence in Cyprus, is out of the question given Greece's economic travails, wouldn't now be an ideal time for a neighbour with the world's 17th largest GDP to offer a helping hand? Or would it be too much like turning the clock back to 1878 for the heirs of Grivas, Sampson and Makarios? I consider this opportunity for the reunification of the North and South of the island should not be missed by the Turkish government.

Dioclese, it's in my blog roll.
http://english-pensioner.blogspot.co.uk