We Need A Change In Food Culture 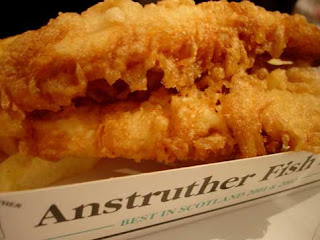 One of the surprising developments in recent years has been the amount of fast food businesses which now seem to decorate town centres.  Even in small towns there are chinese, kebab, curry, sandwich takeaways and few of the old Scottish favourite, the chip shop. Many chip shops now provide Thai, Indian or Chinese food as a takeaway service.

I've never been a regular user of takeaway establishments.  Even when chip shops were the only takeaway in town, somehow I thought it a treat to have a fish supper now and again.  Perhaps that's from my childhood when money was tight and people actually cooked meals from scratch.  About once a month my mother would send me to the chip shop for two bags of chips to be divided between the four of us for a special tea.  A fried egg would accompany the chips (two eggs for my Dad) and I can still recall the 'this is special' feeling I experienced with egg and chip teas.  Fish suppers from the chip shop were out of the question for us then. My mother used to fry the fish and make her own chips because locally caught fish was in abundance in the 50s and 60s.

When I was in secondary school we did have the occasional fish supper because our neighbours owned the local chip and ice cream shops and their fish suppers - and ice cream - were mouth-watering.  Needless to say they were Italians.

But the chip shop fell out of fashion when the multitude of international takeaways arrive on the scene, along with the American chicken and burger supremos.  'Fish and chips is too expensive' was a statement I heard often in the 80s and 90s as a reason to frequent BurgerKing or McDonalds.

For years I've wondered about the content of 'fast foods'.  When I was younger baked beans on toast was my chosen fast food because I've always felt a little concerned about the content of a burger roll, a ham sandwich or a piece of chicken encrusted in batter.  The present crisis in our 'convenience' food wasn't too much of a surprise to me and the 'discoveries' continue, showing that lamb kebabs can contain cheaper beef and/or chicken.

Does this mean weekend party-goers will forsake kebab and curry shops and return in their droves to the local chippy?

Sadly, around here there's not a good chip shop left.  Other types of takeaways undercut them and the better one closed as a result.  During his many years in business the owner used fresh fish direct from Scottish waters and, apart from the splendid taste, you could smell the sea when you bit into the hot, crispy fish. He refused to buy inferior fish in order to reduce his prices and closed a few years ago.

There needs to be a change in the way we regard food. These days too many folk think quantity is value and of course that's untrue.

Bring back the chip shop!  A chippy which uses only local fresh fish and doesn't diversify into international cuisine.

Come to think of it, what happened to the red pudding? I suspect it doesn't pass the food safety laws these days.  It's a funny old world.

"We are what we eat", and there were an awful lot of running records broken at the last Olympics.

Your Chippie reminiscences brought back fond memories of 'gourmet' experiences of my youth.

Four-penneth of chips between mum, dad + yours truly. Oh, and a scoop of 'scraps' (the bits of fried batter that fell off the fish) to bulk it out.

As a Southerner, I've never heard of that Scottish delicacy, "Red Pudding", before.

I note your article makes no mention of that other world-renowned Scottish fried delicacy. It too, untainted by contamination issues.

Once again you have managed to evoke wonderful memories of an idyllic childhood.

As a wee laddie I would spend my summer holidays with relatives in Arbroath, and there, opposite the harbour was a chip shop. Fish straight off the boat and tatties from a local farmer on the Dundee road, both cooked in front of you – together just heavenly!

On fast food I am proud to say that in all my years I have had but one – yes only one – McDonalds. (That was enough for a lifetime)

On a serious note. The loss of ‘domestic science/cooking’ from our schools has proven to be a fundamental error in the health and wellbeing of our children. No longer do households cook meals from scratch. If it doesn’t go for 3minutes then ‘ping’ then it has taken far too long to prepare. This has been a tragedy.

… and on your header pic – The Anstruther Fish Bar – can highly recommend, excellent fish suppers http://www.anstrutherfishbar.co.uk/

What to believe when it comes to food?

I remember hearing once that Pizza was the 'ideal' food as the protein, carb and fat balance was 'just right'. Buy it 'fast' and it is now evil.

Just last night I saw a chef's daughter showing off her home-made pie. Wonderful food. Ingredients spinach (good), sliced processed ham (really?) and topped off with puff pastry (isn't that the one loaded with saturated bad fat?). Must be good though because it is made by the 'right' people in the 'right' place, not like those big chains that probably have a far better clue than we do where their ingredients come from. (How long has that ham been in the fridge dear? When did we open the packet?).

A little bit of what you fancy can't be bad!

Sooner or later the pnny is going to drop : there simply are too many people and too little food which is why the quality goes down and down, and the price goes up and up. It's simple economics.

Reprocessed food is just a way of getting every last thing off the bone and it's no wonder therefore that
what end up in fast food is rubbish.

But it does feed the masses...

I think people eventually always come back to the fish supper. IT went through a phase of being 'very bad for you' so took a hit, people gravitated toward the fast (lets be honest) American food.

The thing is, I love a bacon and egg McMuffin, the anticipation, the taste but afterwards, I'm left feeling faintly disatisfied in ways I can't put my finger on.

There is something of an elephant in the room as well. In Edinburgh, more specifically at Hermiston Gait we have a new Krispy Kreme outlet which has had cars tailed back every night onto the M8, I passed last night at tea time and the police were in attendance (no jokes please) directing traffic.

People are now skipping meals and going straight to the doughnuts, I genuinely don't understand it. People are queuing out the door for them or waiting for an hour in a traffic queue... For a doughnut...

PS: Nicest fish I've had was from the chip shop at the top of the Locks in Fort Augustus, cooked fresh and satisfying in every regard.

When working on the railway in the 1950's fast food was a quick pint of mild between trains.

Red pudding? What in hell is red pudding? Black pudding and white pudding, OK, but red?

Best chippy near me is the Wellington Cafe in Ayr. Still there are still great. Ditto the West End cafe in Rothesay when last seen.

If we're in reminiscing mode, I think my old student haunt the Kinness Fry Bar in St. Andrews, is still there too.

I can't remember what a bag of chips cost Joe and oh yes, the scraps. Weren't they wonderful?

No it didn't because I've never tasted one. The very thought...

Ah yes, there used to be a couple of good chip shops in Arbroath JRB. Not sure about any now but I know the best one in Dundee (the Deep Sea) no longer holds that accolade.

Aye the good old Anstruther fish bar. A couple of times a year I visit them sit outside and savour the contents of the box. One supper is easily enough for two.

The Bervie Chipper is another but I haven't been there for a few years. I remember one in Aberdeen about 20 years ago. Superb fish and chips but the portion was enough for a family of four.

No it can't be bad, but even a little bit can cause problems for some folk Jim.

It's common sense really and a determination to ignore these pretty pictures on packaging. Have a quick look at the label instead.

Aye it does feed the masses and we're beginning to see the results Dioclese. Apart from obesity and the problems that causes, other health problems related to digestive issues are rising fast I'm informed.

Auch pa_broon, if that is your treat then have it. Wonder why it doesn't fully hit the spot though?

I had to google Krispy Kreme because I've never heard of the place. :) I don't understand that either. What's happened to the three square (balanced) meals a day? Mind you I don't have that, just a snack during the day and a meal in the evening. Not good routine I know.

I'm starting a list of the best chip shops so as I know where to visit on my travels.

A red pudding supper was my brother's favourite WY and he still talks about them today - 60 years on.

Scotland, the only country in the world where Coca Cola and McDonalds are shunned.

Do they have scallops in Scotland? I mean large slices of potato dipped in batter and deep-fried.

Yorkshire fish & chips, fried in beef dripping! No better treat. And who would want to eat it all the time? Even lobster would pall, if it was all you ate...

Perhaps that's the problem - it isn't the type or variety of the food, but that nothing is anticipated any more? Everything is on demand - tv, books, food...

Brian, red pudding looked good really, I just didn't like the taste. They were chubby looking sausages for want of another explanation.

Aye we do in some places. They're not called scallops though. Scallops are seafood here. We call them fritters.

Well not all the time Julia, only when you needed a takeaway.

I've never had a Glaswegian curry Chef but it's one of my ambitions. Always seem to eat Italian when there. Don't know why.