Ah, Recognition Of Scotland As A Country 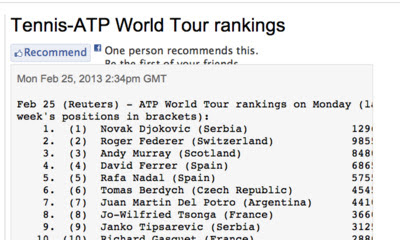 I was pleased to see yesterday that the Association of Tennis Professionals (ATP) recognises Scotland as a country. Aye, the ATP may be small fry in the great scheme of things, but every little recognition counts.

When I suggested on a tennis forum that the ATP ( for men only) should combine with the WTA (Women's Tennis Association) there was fierce opposition, with the main reason being administration of the game would be impossible.

That excuse was unacceptable to me and I explained to the objectors that golf was once similarly divided but now most clubs find combining the administration of the game easier than it was when they had two separate groups.  The objectors weren't interested in any other sport's examples and stuck to their guns.

However, I tried one more time and said online searches for top class games would be much easier if the top players were under the one banner.  Once I received a few replies the penny dropped.  The ATP and WTA are brands as well as associations.  Improving access to online tennis news mattered little, if anything, to them.  As one responder said, "Tennis professionals like having the two associations. Men's tennis differs from women's tennis." That closed the conversation.

My reason for commenting on the forum was not to beat the equality drum but to  discover why the professional tennis world doesn't offer a united front online. Someone wishing to see the progress of our tennis champions has to jump between the ATP and the WTA.  What I found was that, in this era of political correctness, there are a few organisations who are determined to operate the way it suits them and not any pc establishment.  I found that refreshing.

I can't write about tennis without mentioning Andy Murray's purchase of Cromlix House near Dunblane. 'I'm pleased to be able to give something back to the community' he says.

Some years ago I visited Cromlix House for various reasons.  Then it was what is now called 'shabby chic' with more emphasis on the shabby and I wasn't surprised when I heard the business had gone into liquidation.  Twenty years ago it was poorly managed and service was the slowest I've ever experienced in what was then a 4 star hotel.

It appears Andy intends to offer a reasonably priced menu and support local businesses. His new acquisition will not become a 'local' for the people of Dunblane because it's situated 2 to 3 miles east of the town and off the beaten track, but if his venture employs local people and uses local suppliers, it should succeed with the will of Dunblane behind it.

Of course the refurbishment will ensure Cromlix House once again becomes the 'overflow' hotel for Gleneagles (8 miles further east. I don't think there is any love lost between the 200 bed Hilton Dunblane Hydro and Gleneagles). Having such a close relationship with Gleneagles will be good for trade, as long as the new managing company are clever enough to keep a balance between the local population and Scotland's most famous hotel.  Andy can't afford to completely leave a management company in control.  He needs to show a substantial interest in his new project and that could be difficult when he's also committed to travelling the world in search of even more success.

Maybe Andy Murray will now move from England and return to his beloved Scotland.

It has been rather tiresome to hear Andy Murray referred to as British when he wins, but Scottish when he loses. However, even worse is when those tired old nannies at the BBC refer to Celtic FC as Britains major hope in Europe, but 'that Scottish' club when they lost to Juventus last week.

We have a way to go yet before we announce our independence, but I live in hope.

Have you noticed tho' that when he's winning he's British, but when he's losing he's Scottish?

I wonder if tennis courts will appear in the vicinity of the hotel. That Scotland lacks decent tennis facilities is a hot topic when Andy is in the news...

Maybe this is just the opening set in a longer match...

It's preserved in Dropbox now LotF.

Considering the amount of world travel he does IE, I don't think it feasible to live up here because the transport links aren't that great to London. Makes much more sense for him to live there at present, don't you agree?

My old bridge partner used to spend months a year travelling abroad on bridge holidays. About 10 years ago she decided to move to Sussex to be near Gatwick and Heathrow, because she's calculated the cost and extra travel time. She's still fond of her homeland though enjoys Sussex too.

I live in hope too Chef.

I have Dioclese, although the ATP haven't - or do they know something we don't?

The grounds are certainly big enough for a few courts pa_broon so yes, they may well do. Dunblane has a thriving club I believe, but that's from the hard work of parents and also Andy's fame now.

It would be good if he built a couple of courts. The golfers from Gleneagles could have a change of scene.

If the links are so bad from Scotland why not spend some of the Barnett largesse to improve them ... you know the flow on from all that upgrading of links in England? That way your fellow Scots [who must be hating every minute of living in that damned country down south away from their native land]won't have to leave to further their careers.

I'm sorry but this is 'cake and eat it' stuff viewed from here in Australia; and why do I have the feeling that even if you win the referendum you'll still expect the same uninhibited access to England's facilities as your right!

No I haven't Dioclese but I have noticed that English atheletes are invariably referred to as British.

This report by the BBC on Murray's loss to Djokovic refers to him as a Briton (doesn't mention he's a Scot):

Whereas this BBC report on his win over Federer refers to him as a Scot (mentions he's a Briton):

Unfortunately Michele what you suggest is not in the hands of the Scottish Parliament. English airports have to provide us with spaces and they don't.

No it's not cake and eat it stuff. Andy Murray lives down there to be at the hub of transport and tennis in these islands. No doubt he'll eventually semi-retire back here but he still has a long way to go with his career.

Strange IE. You'd think the BBC would have a standard nationality wouldn't you?

Great news & creating jobs. A credit to his nation, his home one!

Aye Daisy. Hopefully I'll be able to visit once it's refurbished.