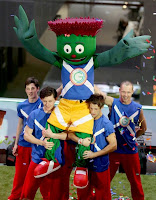 While this morning's papers report on Chris Hoy's delight at having a brand new velodrome emblazoned with his name and ready well in advance of the Commonwealth Games in Glasgow 2014, my thoughts turned to another sport.

It's tennis.  Scotland has the best tennis player since records began yet tennis isn't included in the list of sports for Glasgow 2014.  For years it's been on the list of approved optional sports and has featured in every Commonwealth Youth Games programme, but it didn't make an appearance in a full Games programme until the 2010 Commonwealth Games when Jocelyn Rae and Colin Fleming (both Scotland) won gold in the mixed doubles.  Then a total of 23 nations were represented by at least one player in either the men's singles, women's singles or mixed doubles.  Scotland provided 2 in the singles and 2 in the doubles.

There may be problems achieving the attendance of the 'big' players owing to their 12-month international schedules, but surely that should not have deterred the decision makers from including the sport in the Glasgow programme.  Sadly Rae and Fleming will now not be able to defend their title.

Cycling is, like tennis, another optional sport. In 2010 Scotland won one gold, one silver and one bronze and on the back of that result a new velodrome was built.

I admit I'm an ardent fan of Andy Murray but I'm saddened to note that his own country decided not to include his sport in the 2014 programme.  It doesn't say much for the politicians and others who have recently been standing in line to praise Andy's superb achievements does it?
Tweet
Posted by subrosa at 09:44

(and before you ask – I am equally disdaining of cyclists)

I realise your disinterest in such matters JRB, but dare I ask if you think table tennis is a national pastime in Scotland?

There are other Scottish tennis players of course - such as the two who won the doubles at the last Games.

The choice of optional sports was made in part to garner votes from other commonwealth games organisations - Glasgow was up against Abuja - and in part to take advantage of existing facilities and new builds that Sport Scotland wanted to pay for.

I found this interesting quote from the England Commonwealth Games webpage:

"In November 2006 the Commonwealth Games Federation agreed there should be 10 core sports, with each bidding city able to select up to a further 7 sports. When deciding which sports would feature in Glasgow's programme, their appeal across the Commonwealth was considered alongside the likely spread of medal success, and the long term benefits for Scotland of including the sport.

Speaking about the sports programme Louise Martin of the Commonwealth Games Council for Scotland said: “Getting the sports right was a crucial part of the bidding process. We have made sure we are giving ourselves the best opportunity for Scottish success, but we have selected sports that will satisfy voters from all Commonwealth countries”.

"The sports we have selected do just that. We have spoken to voters from around the world and taken their advice on what sports they want to see at Glasgow 2014. We have made sure that the views of all countries, big and small, have been taken into account. This means that our Games will be a spectacular celebration of sport and of the Commonwealth itself.”

Brian, thanks so much for that link. I had read that previously but couldn't find it again.